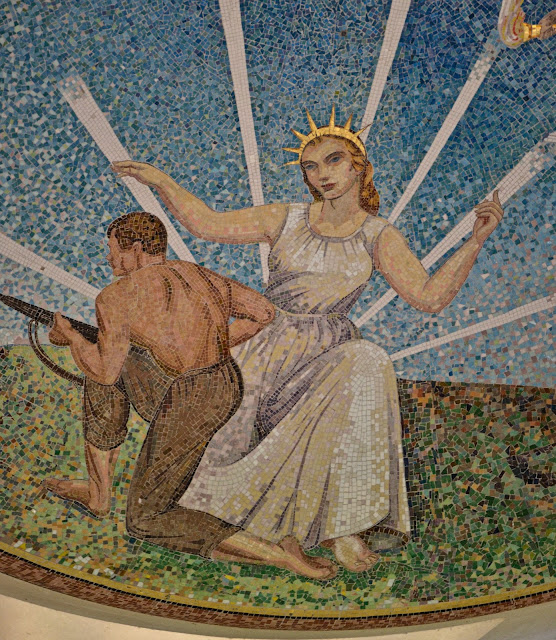 This is a guest post. My husband, Tom Cox, delivered this reflection at our Celtic Evensong and Eucharist last evening at St. Stephen's Episcopal Church, Richmond Virginia. I am grateful to him for allowing me to publish it here.
The photo is part of a mosaic at the American cemetery overlooking Omaha Beach in Normandy.

When I was growing up, I loved baseball. (I still do.) Every October, my father allowed me – actually, he encouraged me – to take a “sick day”’ off school so I could stay home and watch a World Series game on live TV. My father was not a very effective parent when it came to enforcing rules or dispensing discipline. As my wife, and even my now-adult children, would attest, I came to share my father’s parental deficiency in that regard.
I have recently been thinking a lot about my father. This summer, my wife and I traveled to France. While there, we visited Normandy to tour the D-Day beaches and area towns he had fought in or passed through during World War II. That trip, like the recent Ken Burns/Lynn Novick Vietnam War documentary, reminded me what a terrible price young people, even those who survive, have regularly been called on to pay in wartime.
And my father did pay quite a price. Before the War, he appeared headed toward big things. He was handsome, popular, and a star athlete, who after high school, accepted a football scholarship and enrolled at Virginia Tech. But the world intervened, and in 1943 (after his second year of college) he dropped out and enlisted in the Army.
Two years later, when the War ended, my father returned from Europe as a combat veteran, decorated for heroism at the Battle of the Bulge. He refused to talk much with his sons about his combat experiences, so I only know bits and pieces about some of the awful things he saw and lived through, but I am now convinced that he suffered from what only later came to be called Post Traumatic Stress Disorder. He certainly exhibited several of the common symptoms: He experienced terrifying combat-related nightmares. He tried returning to college, but soon dropped out. He began turning to alcohol for comfort, which ultimately led to a series of job losses and family crises. And throughout most of the rest of his life, he wrestled with guilt and remorse because he believed he had let down his family and friends.
I regret that it was not until after his death that I began to recognize the extent of my father’s brokenness and how it affected his life. But along with my sadness and regrets, I have come to recognize another possibility. I now wonder: absent the brokenness and recognition of his own vulnerability brought about by his traumatic combat experiences, would the confident, even arrogant, young man who enlisted in 1943 have become the father who invariably found me and my own accomplishments, and even my failures, good enough in his eyes? The father who did not attempt to mold me into something that he, rather than I, wanted me to be? The father who encouraged his son to play hooky to watch the World Series?
I will never know for sure, but I now think it possible that my father’s woundedness, suffering, and perception of his own failures were what brought him to where he could offer me a gift he could give me – the gift of uncritical and non-judgmental acceptance.
Theologian Richard Rohr has written about suffering -- how it changes us and how God sees and shares in the pain and suffering of all humanity. After yet another week in which we -- and God -- have witnessed yet more trauma and suffering brought about by yet another terrible and seemingly inexplicable act of violence, I will close with some words from Rohr’s book The Divine Dance:


“We [human beings] have to block out a certain degree of raw suffering for self-care. We can’t take it all in, but apparently God can. That’s the visual of the Cross – God taking in all of the pain of history.” So, Rohr says: “Let pain bring its gift of vulnerability. Let some of it change you.  .  .  In a way, there is only one suffering and one cosmic sadness, and it is the very suffering of God. And we all share in it.”