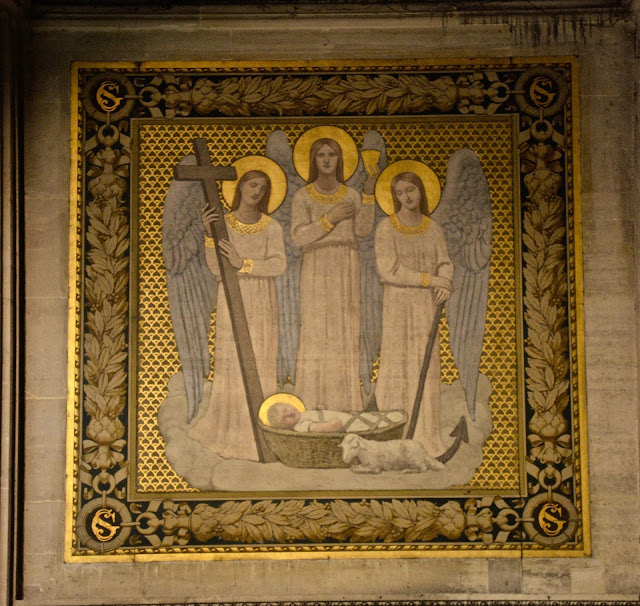 It goes on, “The world treats you mean, Lord, treats me mean too. But that’s how things are down here. We don’t know who you are.”

“Look how we treated you. Please forgive us Lord, we didn’t know it was you.”

I think of this song when I heard the words of John: “Among you stands one whom you do not know.” John came to testify to the light that all might believe through him. John the Baptizer always points away from himself and to Jesus.

And the prophet Isaiah described the savior as the one who has been sent by God to bring good news to the oppressed, to bind up the brokenhearted, to proclaim liberty to the captives and release to the prisoners, to build up and repair, to give justice, to lift up the lowly. Jesus quoted Isaiah when he first spoke in the Temple as he began his own ministry, and then said, “The Scripture is fulfilled." In other words, I have come to bring good news. I have come to heal, to comfort, to restore. It’s me. And the response was, “Oh, come on. Who does he think he is? This is Joseph’s son.” And they tried to throw him off a cliff.

We are told over and over again in the Bible who the savior is, who the savior will be, but somehow the people around him don’t always seem to get it. And I think sometimes neither do we. We have trouble translating the things Jesus said then to the way things are now. We have trouble recognizing the current version of lepers and tax collectors, trouble imagining who they are today. I listen to the news and wonder - are the Rohinga today’s outcast? Which among the refugees are the lepers? Could the undocumented be the equivalent of tax collectors? Are children without health care today’s lowly? Which poor are the ones Jesus loves, which prisoner is the one he wants to set free? Who is doing the work of Jesus among these?

Sometimes I hear people saying how Jesus thinks or the way Jesus wants us to act or what Jesus thinks of this group of people or another here in our world and I wonder who it is they are talking about. I’m not sure I recognize their version of Jesus. Perhaps they feel the same way about mine. We hear what we want to hear, I guess; we long for a savior who will save us by being on our side and against those we perceive to be on another side.

So I wonder. Who are we really waiting for this year? And what kind of witness to the light is among us today that we do not recognize as pointing to Jesus, Jesus who spent quite a lot of time showing that he is among the least and the lost, that’s where he is to be found, not in a mansion, not among the well-to-do but among the sick and the imprisoned and the poor, and the ones who are treated badly by society.

And yet despite these directions, we might miss him. Because it’s just not that hard to be blind to the marginalized. It’s not that hard to think that people are poor because they don’t work hard enough, that they are sick because they did not make good choices, that they are imprisoned and rejected because they need to be punished for their ignorance or their desperation. We want people to deserve what they get and get what they deserve. That’s how things are down here.

But we have a chance again this Advent to mend our ways, to repent of our blindness, to try again to see who specifically it is among us who needs to be treated as if they were as holy and precious as God. Who exactly it is among us who testifies to God’s abundant love, who points in reverence and gratitude to the one who loves and lives among the least? We have the chance again to let God come to us in the way God must come to us, wrapped in holy vulnerability and humble humanity, in the person of a nobody born to nobody parents, not to be pitied but to be honored. We have a chance to repent of our having an image of God that Anne Lamott warns us is not God if he just happens to hate all the same people we do.

John calls us to repentance and also he inspires us to witness to God in the way that he does. To really see God somewhere specifically in the world doing justice and loving mercy and eating and drinking with the downtrodden and doing the work of restoration to dignity. And to point with reverence and awe to that as witnesses ourselves, the way John points to Jesus to say behold the Lamb of God, the light of the world.

It’s up to us now to say this is our God, who is binding up these particular brokenhearted and building up this particular thing that specifically has been torn down, who is smashing through all the barriers we have put up to make sure that he finds each and every beloved child of God in whatever wilderness we are wandering. This is our call, to really see God as God is and not as we wish God would be, and to be witnesses ourselves, to point to and to name divine holiness wherever we see it.

With Mahalia Jackson I want to say, Forgive us Lord, for the way we treat each other, knowing that this is the way we are also treating you. With Isaiah I want to say let us repair and build up, let us lift up the lowly and let us love justice. And with John to say, Behold! Indeed! I do see the light.