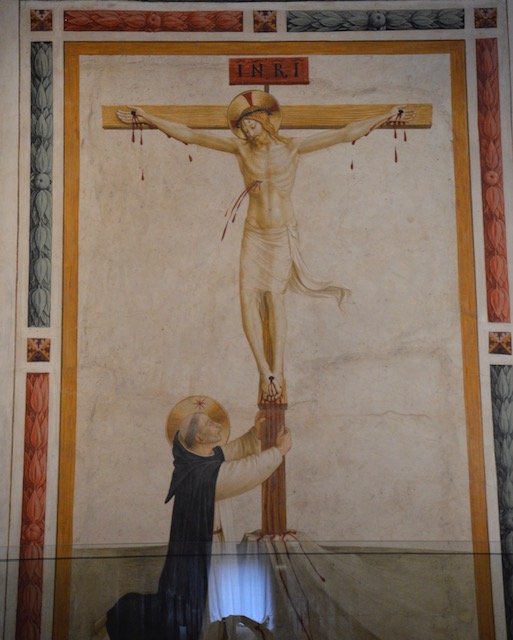 I have such a hard time with this.

For much of my life, I kind of glossed over the events of Good Friday. Crucified, died and buried, that all goes together quickly as a memorized and oft-repeated phrase, and then we get to the real good part: the Resurrection, God’s action in history to raise Jesus from the dead, to overcome death and the grave, to open the way for us to eternal life, to show that nothing can separate us from the love of God. Yes, yes, all of that yes. Resurrection will come.

But today, I cannot gloss over the crucified and died part. Jesus’s death was not poetic or lovely, it was not like Beth in Little Women, who just faded away gently and sweetly. It was not like Sampson, who brought down the Philistines and himself as a last act of power and vengeance, an angry self-immolation. It was not beautiful and it was not about brute strength.

It was the result of blindness, fear, scorn, and hate, a willingness - maybe even an eagerness - to draw a line and challenge anyone who crosses it, to say both to certain individuals and to whole groups, You don’t belong on my side of this line.

In the late 19th and early 20th century, there were thousands of deaths of this sort. Mobs clamored for the death of men (and a few women) who dared to ignore the color line, mobs capturing these men and advertising the upcoming public hanging (and accompanying degradations) so that people could come and watch other people being lynched. People, black people, hung on trees, maybe after being tortured, while other people, white people, stood around, watching as if this is just what happens some days. Sometimes folks posed for pictures at these spectacles, and photographers made and sold postcards of men and women and even children standing, smiling, next to the black dangling feet or maybe the mostly or partly whole but dead bodies of people killed in a show of power and control and its attendant sentiments: fear and hatred. This is what we can do, the powerful said, and we’re not at all unwilling to do it if you get out of line, if you cross our boundaries. You will pay. Look. See?

What is power, what is life, what is death? How is it that this unspeakably cruel scene is supposed to draw us all together? How are these arms stretched out upon the cross able to gather us into a saving embrace when there are nails and blood and jeers and spitting and mocking in the way?

As far as I can tell, when the Scriptures say that Jesus through the cross would draw us all unto himself, it is in the same manner as a train wreck. We gather in fear, dread, and bewilderment. We look and cannot look away. We watch, mesmerized and yet repelled, with focused attention, the smashup.

So what is truth? as Pilate asked Jesus. What is the truth of this day, of this life? I am the Way, Jesus said, and the truth and the life. In the beginning was the Word, and the Word was with God and the Word was God. And the Word became flesh and lived among us and we have seen his glory, full of grace and truth.

Jesus is God made flesh. And Jesus, God made flesh, would not come out to battle evil with swords and clubs, would not use humiliation and violence as means to an end. That is the truth that stood in front of Pilate. Jesus showed us another way of being, of living, that is about divine, abundant life for everyone in the midst of a world that is more at home with stories about scarcity and the fight for power and control by a few.

Jesus came to show us God, and the world did not like the way he broke down the walls that the world puts up, the way he crossed the lines and not only crossed them but erased them. And there are consequences for this kind of life, of crossing and erasing boundaries.

Unknown said…
Wonderful connection to show the death (and resurrection) are not just once upon a time events but eternal experiences of dying and rising, each and every day, to draw ever closer to communion with our God. Great contemporary example of both lynchings and separation via walls and laws from those we don't like. Inspiring!
April 26, 2019 at 8:35 AM