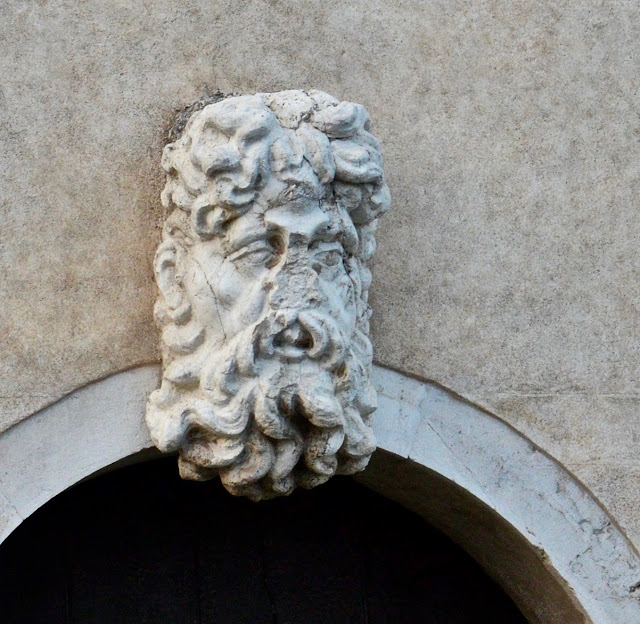 When I was a little girl, we used to take a drive every now and then to visit relatives who lived about an hour away. The route was entirely through the country, passing some barns and grain silos and a number of corn and tobacco fields, and crossing one set of railroad tracks, and there was pretty much nothing else to see. But one time, we passed a man walking along the road, and this wasn’t a man who had run out of gas and was headed to the filling station or anything like that. There had not been, nor would there be, any car sitting on the side of the road. Nor was he walking home. I don’t think there was a home.

This man was very unkempt, his hair was long and out of control, his clothes were tattered, his skin leathery and burned, and as we passed him, my parents in the front seat sat very still and quiet and looked straight ahead, until the silence was broken by the bigmouth in the backseat (that would be me) asking my mother, “Who was that?”

After a pause, my mother answered. “That was the Wild Man,” she said.

In my mind, I seem to recall that several times after that, we passed by the Wild Man on that particular stretch of road, but I might be wrong. Maybe we never saw him again, maybe we saw him one more time or a few more times. I do know that every time I went that way, though, even the last time just a couple of years ago, I looked for him, as if he were one of the landmarks along the way. I remembered “after you cross Highway 264, here is where we saw the Wild Man.”

When Jesus sailed across the lake to the land of the Geresenes, when he left his home turf of Jewish country to enter a place where Gentiles lived, he, too, saw a Wild Man. But the way Jesus sees is maybe different from the way we see. His reaction was not to pass by with eyes straight ahead but to stop and ask the man his name - but the man couldn’t even say what his name is.

I mean, he says he is Legion, but that’s not a name, that’s a number. A huge number, the number of a whole division of the army of the Roman Empire, a number like the whole 82nd Airborne Division of the US Army. A number that seems to represent the things that have uncontrollable power over him. The things that, as Luke says, had tormented and driven the man into the wilds, so that he had to be put in chains and kept under guard, away from the town, safely kept away from the living, to pace and sleep, if he ever really slept, among the dead.

The Geresenes see the Wild Man as a threat, as one that needed to be kept away from them, chained and guarded, but Jesus sees him as a child of God, neither Jew nor Gentile, neither slave nor free, neither Other nor Danger, but a beloved child of God who has been imprisoned by things he can’t control, and Jesus does what Jesus always does. He sets him free. He restores him to wholeness, taking away the false identity that has been forced upon him so that he can rejoin his community and live among the living.

But the people are not happy. They are scared. To them, this is like giving King Kong an apartment on Fifth Avenue instead of shooting him down. They are so scared that they ask Jesus to leave on account of what he has done, bringing this man back to life. Whatever it is that Jesus brought with him to this side of the lake, whatever it is that caused this man to be transformed from tormented to normal, they don’t want any of it. They want Jesus to get back into his boat and go back to where he came from and leave them alone.

But it’s already too late. They can send Jesus away, but the work of God will go on in their community. Luke tells us that the man formerly known as Legion lived into his new vocation of being the living example of the healing, transformative power of God. He became a missionary of the Good News, both in the country and in the city. So who knows what actually happened to the Geresenes after Jesus left, as the man bore witness to the Goodness of God? I wish Luke had told us that part too, shown us how it was that the Geresenes became a thriving, loving and beloved community of neighbors who were no longer afraid of one another.

Every community has its tormented people in chains.  People who because of mental illness or addictions or poverty are unable to live what society deems a “normal” life - with a job, a home, a family, and baths and haircuts. People who do not speak our language or know our customs, who are the wrong color or nationality or religion, who are just “not like us.”  So long as they “stay in their places,” we are reasonably comfortable.  When they actually become part of our community, we are uncomfortable.

Because we are all transformed by being in community with people who are not like us. Despite the fantasy many of us entertain, other people don’t simply join us and become just like us. We all change when and because we are in relationship together. We have an effect on each other. And this is what’s scary.

We can choose to accept and even embrace that and grow into the fullness of humanity that Jesus came among us to embody. Jesus was a guy who had no home and was pretty scary himself because of who he ate with and who he touched and who he loved and cared for. Some people wanted to keep Jesus on the margins too. He upset them. He wouldn’t leave the divisions in place. He wouldn’t leave the outcasts outside but brought them right in and showed both the outcasts and the in crowd that they were all first of all children of God. And then Jesus challenged everyone to deal with that. And in fact he left them to deal with it themselves. He left us to deal with it ourselves.

God’s people exhibit breathtaking diversity. We have much to learn from one another. Jesus came to free all of us - those of us who are obviously in chains and those of us who may look like we are free but are actually in bondage. Some of us are in chains because of our own fears, and so we are not able to be who God created us to be. Some of us will set up barriers and hide behind them if we can’t get others to stay on the outside themselves. Because we are scared.

But the good news is that Jesus breaks down barriers, Jesus will come and find us all and restore our identities to us. Jesus will take away our chains and remind us who we are - children of God - in our breathtaking diversity and yet all one in Christ Jesus, together.

Yesterday I tried Googling “the Wild Man on Highway 39” to find out what became of that person I saw so long ago on the side of the road. Perhaps you will not be surprised that I came up with nothing. Probably his name was not even The Wild Man; probably that was just a false identity.

Thomas D said…
Thank you so much for this sage and spirit-filled reflection. Peace and light. (I think this is my first time commenting!)
June 25, 2019 at 11:38 PM