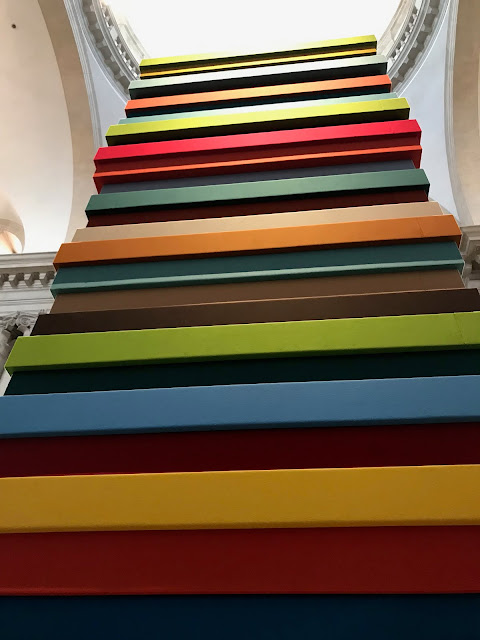 The Basilica of San Giorgio Maggiore sits on its own small island in Venice. You have to take a boat to get there.

The exterior - designed by the architect Andrea Palladio and built in the 16th century - is Greek/Roman classical and the interior is European High Renaissance.

Most people go out to San Giorgio to climb the bell tower (now serviced by a modern elevator) to see the spectacular views of Venice - the lagoon, the Grand Canal, the islands and city full of church domes, bell towers and terra cotta roofs. From the tower one can look down on a beautiful evergreen maze in the monastery gardens next door that is hidden from view from the ground and look out past the Lido - the iconic beach - into the Adriatic Sea. Boats of every type cruise up and down the canals - the ambulance boat, the garbage boat, water busses, the brown UPS boat.

But church nerd that I am, I had a particular interest in the interior of San Giorgio. Compared to many a European church, the interior is very understated. It is the home of several major works of art - Tintoretto’s The Last Supper most prominent among them. And of course there are columns and statuary throughout the church: the life of St. Benedict, St. George slaying the dragon, the Trinity, the four evangelists. San Giorgio is said to be the masterpiece of Palladian design, the pinnacle of a classical church in an era of thousands of classical churches. 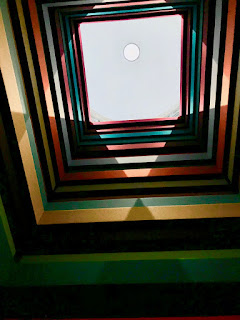 When we went inside, though, we were surprised - maybe shocked - to see a 33-foot tower composed of brightly colored stacked frames standing right in the middle of the church, under the central dome. Yellow, blue, black, white, red, orange, green felt cover the frames. We approached it in wonder. There was a doorway into it, and we went inside the structure/sculpture and looked up to see the glass window at the center of the dome overhead. “What is this?” we wondered. “And what is it doing here?”

What it was was part of an art exhibition by the Irish artist Sean Scully called “Human,” and this particular piece was called “Opulent ascension” - his take on Jacob’s Ladder. You remember the story of Jacob’s ladder - Jacob lies down to sleep one night and dreams of a ladder that goes into heaven on which he sees angels climbing up and down, ascending and descending. It is the gate of heaven, you see.

And so here was this almost fluorescent piece standing boldly in this white stone Classical Renaissance atmosphere, halfway between the door and the altar with its bronze figure of God crowned by a triangular halo, this stairway to heaven through the dome of San Giorgio, a “conduit between the physical world we can see and a transcendent one to which the soul aspires,” as one art critic described it. 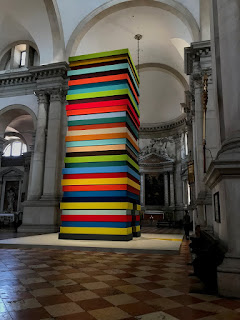 And I loved it. This church, despite being filled with centuries-old art, was no dry museum, like so many churches, preserved and visited but no longer parishes, just final resting places for beautiful statues and religious themed paintings but with no water in their baptismal fonts and no food pantries on Mondays.

The domes and spires of these very old churches were meant to point to heaven and inspire faith in our connection to the Divine. And here Sean Scully was doing the same thing in a new way, daring us to see that the gate of heaven is still available to us even in the 21st Century, even in a 16th Century edifice. It’s not just an old story. Scully said he wanted to make available through his art the journey from the physical to the spiritual and the spiritual to the physical.


And physically standing inside the brightly colored tower in that old, old nave, my spirit did soar up and out, and I gave thanks that people are still trying to show us the way to God. Even in church.