Repairers of the Breach 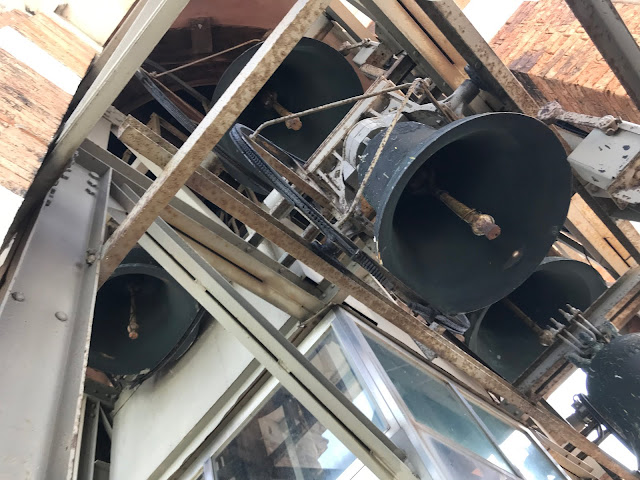 This afternoon at 3:00, in concert with the National Parks Service, churches all over the country - here in Virginia, up in Connecticut, in Minnesota, in Georgia, even out in Napa Valley, California - Baptist churches, Episcopal churches, AME churches, all kinds of churches - are going to ring their bells to commemorate this day in 1619, 400 years ago, when some twenty-odd black men and women - people who had been taken from their homes in West Africa and forced onto a Portuguese ship named the St. John the Baptist (doesn’t that seem wrong?) only to be stolen by pirates, yes pirates - were led or maybe pushed down the gangplank of the ship The White Lion and sold to settlers at Point Comfort, the place now known as Fort Monroe, just down the peninsula from us, at the confluence of the Chesapeake Bay and the James River. John Rolfe, the Englishman from the settlement at Jamestown, the one we remember because he married Pocahontas, made a note of it, and that’s how we know the story. The men and women were sold in exchange for food because the pirates had run out of supplies. Those twenty-some were people, but they were sold like cattle for corn.

This bell ringing is not a celebration. It is a commemoration. That August day marks the beginning of the slave trade in what would become the United States of America, a practice that went on for another 250 years. The bell ringing is a symbolic action saying, we know, we acknowledge, we will say it out loud, God help us, but white people used to buy and sell black people in this land as if they were no more than the oxen that were yoked and lashed to pull plows across hot fields.

Because until we say it, we can’t heal it. Bryan Stevenson, the author of the book Just Mercy, which many of us read two summers ago, put it this way: you can’t skip the truth to get to the reconciliation.

And so the bells will be rung for four minutes, one minute for every hundred years that has passed since the day those twenty-some people were sold into slavery here in Virginia, to acknowledge that truth, to put it out there in the open, in the hope that we can get to reconciliation.

Truth and reconciliation are words we use a lot in the church. They come from the BIble. Jesus said “I am the way and the truth and the life.” And Jesus also said that when he went away, the Spirit would come to guide us into all truth, even to those truths we cannot bear to hear now. And when you know the truth, he said, the truth will set you free.

So, who better to hear on the subject of healing and reconciliation than the prophet Isaiah, thank you Holy Spirit for putting this in the lectionary today - Isaiah my favorite prophet and I think Jesus’s favorite, too, because he quoted him often. In our reading, Isaiah was speaking to the former Exiles who had come home from captivity in Babylon. But what had once been their beautiful and beloved home, Jerusalem with its holy Temple, a city on a hill, was now just a pile of rubble. The city had been destroyed by overwhelming imperial forces - the walls breached, the city overrun, the temple smashed and burned to the ground - and the people had been taken away in chains. After 70 years, they were allowed to return, no longer in chains, but they were in chaos, fighting with one another over who were the real Jews and who were foreigners, who they could marry and who they couldn’t, who belonged and who didn’t. They were practicing oppression and slavery, and even trying to kick each other out of the land.

So there was not only that physical breach in the walls of Jerusalem, but even more importantly, a psychic breach among the people, a great tearing apart of the fabric of their society.

And in the midst of all that fighting and tearing apart, Isaiah spoke God’s words to the people. He gave them a new name: the repairers of the breach. He called them to stop the oppression, stop the finger pointing, stop the ugly talk - stop the things that create these wounds among us - these things that tear apart and ruin (and I use the present tense here deliberately) - and instead to be repairers of the breach. Yes, there is a breach, it’s there for everyone to see. So be repairers of the breach and restorers of the streets to live in, he said. Rebuild the society in accordance with God’s repeated calls for justice and mercy. I think it is no accident that a number of religious and charitable organizations - even church project teams - have taken this beautiful and poignant phrase, repairers of the breach, as a name for their ministries aimed at rebuilding a just and merciful society even now in our time when everything seems to be torn apart.

And who better to see practicing repair and restoration and healing than Jesus, who observed a woman bent over from whatever it was that was burdening her and called her over, right into the middle of the synagogue where everybody could see, and touched her to make her whole. The religious leaders found fault with him for “working” on the Sabbath, bless their hearts, but Jesus was making an essential point: what better time than the Sabbath, the Lord’s Day, to bring health and wholeness to those who are bent over with pain, bent over with grief, with despair, those who are hungry or homeless or not in their right minds, who are in thrall to something that simply has overpowered them? What better day than the Sabbath to do what is needed to help someone who has been brought down low to stand up straight again? What better day than today?

And so yes, today, this Sabbath day, which has been designated as a day of healing by the folks who are putting together the commemoration of the arrival of enslaved Africans to our shores, offers us a sacred opportunity to heed the prophet and to be like Jesus. As you know, we do not have an official bell at St. Stephen’s. But nonetheless, some of us, clergy and wardens and others, are going to gather outside on our front steps and ring our own bells at 3:00 for four minutes to participate in the commemoration. For me this is to say, I know, I acknowledge the sin of slavery, which my own ancestors practiced and which gave rise to the scourge of American racism that continues to rend our society today. I know how that has torn us asunder, and although this is all way bigger than I am, I want to answer God’s call to be a repairer of the breach.

And if you can, come and join us.