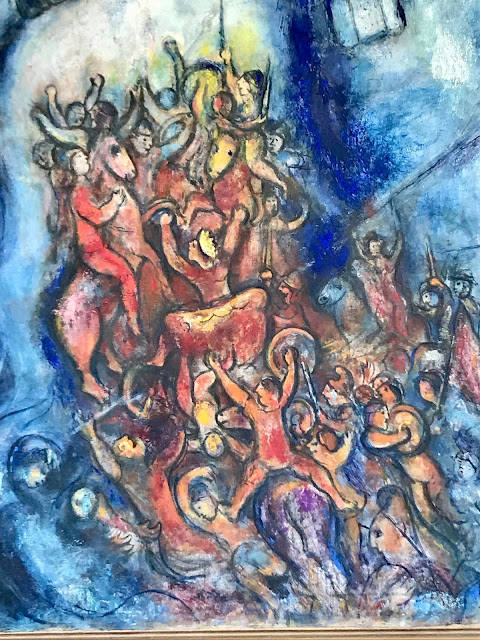 The parable of the wheat and the weeds is one of my favorites. I think this is mostly because I grew up, uncomfortably, in a family that over the generations believed that if someone doesn’t behave the right way, it is incumbent on ”someone” to kick this person out of the family.

It might be a temporary thing - like shunning or ostracizing - just until the person gave in and started acting right.  Or it might be more permanent - being disowned. Mostly it was used as a threat, I think, but it was one of the things that my forebears thought meet and right so to do.And occasionally did do.

It was not until I was an adult when I casually mentioned this family practice, that someone said to me, incredulously, “People can’t just kick someone out of their family!” “They can’t?” I replied, just as incredulously. “No!” was the answer. “You’re born into a family and that can’t be undone, just like you can’t become unbaptized.”

My heart felt so much lighter to hear someone say, “Hey, that’s not right. No one can kick you out of your family!” And so I love this parable.

I love that Jesus (Jesus! not just somebody on the internet) says, “when you try to pull up the weeds, you risk damaging the wheat. Your zeal to dig out the bad can hurt the very roots of the good. So leave it alone and let God sort it out.”

This parable is only told in the Gospel of Matthew. Matthew’s community - Jews who were followers of Jesus - seems to have been kicked out of the synagogue in the wake of the Temple’s destruction. Their divisions became too great and they separated, painfully, and not without further divisions among themselves. So this parable had special meaning for them and encouraged them to just keep hanging on instead of tearing their fragile community apart.

Looking beyond Matthew’s community, though, history is littered with examples of purity movements of groups striving to rid communities, states, countries of those with different beliefs or customs or religions or skin color or whatever. In medieval times the Inquisition was born in Europe and Crusades were launched and in 1492 Spain expelled first the Jews and later the Muslims and then finally those Jews or Muslims who had converted to Christianity under duress. In the 20th century, horrific ethnic cleansing was unleashed in Bosnia, Turkey, Sudan, and of course, Germany.

Closer to home, white mobs in Forsyth County, Georgia, carried out a plan in 1912 to drive out every black person who lived there and succeeded in only two months through a campaign of lynching and burning down homes, businesses, and churches.

Efforts to “cleanse” a community tears it to pieces, and for what? Is this what God wants?

And yet …. I think of Dietrich Bonhoeffer, the German theologian and pastor who participated in a plot to murder Hitler.

Are we really not called to root out evil? I am uneasy with the implications either way.

There are of course many other stories from Jesus, not just one story, with different emphases, but this is the story we are confronted with today.

So here is what I do know:

I do know that we are called to build up the kingdom. I know that Jesus said he had other sheep he must call into the fold with us. I know that God does not desire the death of anyone, but rather desires repentance. I know that some people cannot tell a potato vine from poison ivy.

And I know that killing makes us killers, that the trauma of violence, physical and psychological, tears people and communities and society apart. I know that getting involved with evil can damage us so that in the end we might not be able to tell if we ourselves are wheat or weeds.

So, Jesus says yes, there are always weeds. But we've got other things with which to concern ourselvesin the little time we have to make a difference. And so our job is tending to the business of bearing good fruit ourselves.

So how do we do that? I think it begins with focus and moves forward with action.

It begins with looking for what God is doing in the world, where God is bringing good out of disaster, and then doing what we can to work with God in that endeavor.  We have to develop the eyes to see God at work instead of allowing our gaze to fixate on the stuff or people we wish would go away and thus infecting ourselves with bitterness and hate.

Perhaps we regularly give blood. Perhaps we work to care for our environment, for public health, or in education. Perhaps we focus on feeding the hungry and befriending the stranger. Perhaps we focus on educating ourselves about those who are different from us and developing the courage to stand up for what is right for the common good, not just my group’s good, against those who insist that they are not responsible for the wellbeing of anyone other than themselves.

Our job is to work at building up the kingdom as well as we can, to bear good fruit ourselves, knowing that we are broken people living in a broken world but nevertheless trusting that in the end, truly, God will make things right.

Penelopepiscopal said…
Thanks, Ray! I hope you are faring well during this awful time.