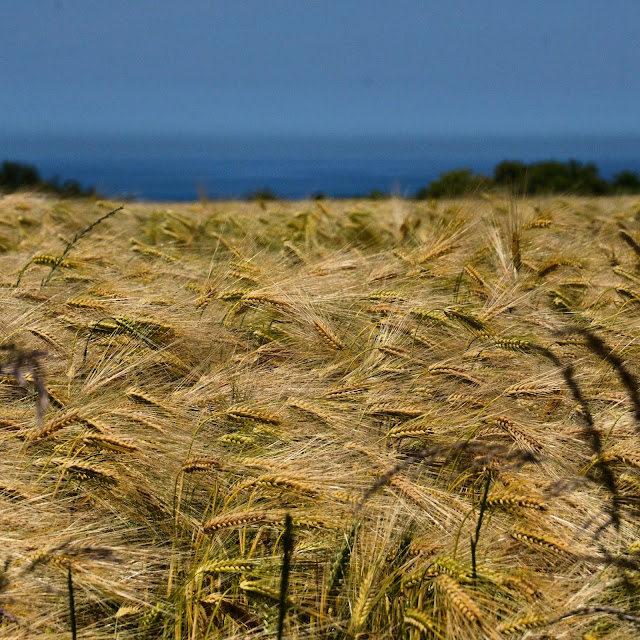 Are you a personality test taker?

Are you a Taurus, an ENFP, an Enneagram 7, a yellow, a Spring? Do you click those tests on Facebook or read those articles that tell you all about yourself? Don’t we love to learn all about ourselves? I do!

So if you are like me, then, you probably hear the Gospel today, and immediately skip to the part about the soil. It’s like a Bible personality quiz! What kind of soil am I?

And it is true that there is stuff about the soil in this reading today and how the seeds fare in the different kinds of soil. But Jesus said, and this could be a clue! that this is the Parable of the Sower. So let’s look at that for a minute and see what we can see.

Parables are not stories with morals but stories that are puzzles with a twist, sometimes an absurdity, as an important feature. Jesus’s parables often use examples from housekeeping or farming, things people who were hearing them knew about, that were then turned upside down. People would get that it was upside down.

When he asks “who wouldn’t leave the 99 good obedient sheep and go after the one dumb old lost sheep” normal sheepherding standards would suggest that the answer is “no, actually, one would do that, Jesus! No one would leave the 99 for the one. That’s absurd.” Or in another story, no one would be so excited to find a lost quarter that they would throw a party and spend $100, Jesus! That’s absurd.

And so the sower. He turns out to be pretty absurd, too. If you are a farmer, your seeds are precious. Your future depends on their yield. You don’t want them wasted, eaten, washed away, lost. But Jesus suggests, in his understated way, that the sower is pretty radical.

The sower flings out the seeds everywhere. There is no pre-flinging soil analysis in this story. The sower doesn't sit down and figure out where the best place is to put the seed. Doesn't try to avoid the rocky places or the path or the thorns.  Doesn’t even especially aim for the fertile places. Doesn’t bend down and pat each precious seed into it’s hill or its row. The sower flings.

Because the sower knows there is more than enough seed to sow in every nook and cranny and even more than enough to waste - and who can say how much is wasted?  It feeds the birds, it goes back into the earth, it nourishes even when it doesn't immediately look productive.  It may come up later.  It may grow a fern through the cracks in the patio in that one shady spot to the delight of a curious baby rabbit.

So, the sower is unbelievably extravagant, exuberant, profligate. Which is sometimes a negative word because it means wasteful, but who is to say what is wasted?  Who cares if the sower throws the seed everywhere - it's the sower's seed, not ours. There is no condemnation of this profligate sower. Maybe that’s another clue.

So yeah, there’s the soil. But do you see how easy it is to skip right to that part and focus on ourselves and begin to justify ourselves? And make it about us? Of course we want to be fertile soil. Of course we want to bear good fruit. And we congratulate ourselves for working hard making ourselves into fertile soil. And maybe we might be tempted to look around at other people and size them up. What kind of soil are they? What kind of fruit do they bear?

And then maybe we are tempted to compare ourselves to others, or even to judge others, and to focus on how good we are or how bad they are and then we have made it all about us and we forget all about the sower, the one who flings out that grace wherever it might land, no pre-flinging soil analysis required, and we forget that it is God who saves because actually we cannot save ourselves. And you see where we have ended up.

I think this is why Jesus says that this is the parable of the sower, the flinger, the one who knows that God is in charge of the harvest. To help us keep the focus where it ought to be.

The prophet Isaiah says, instead of the thorn shall come up the cypress and instead of the brier shall come up the myrtle because it is God who gives the seed to the sower. It is God who makes life rise from the cracks in the sidewalk and brings life to the dry bones in the valley and throws out grace everywhere because with God there is always enough and more than enough. Grace is not a pie that only has 8 pieces and we don’t always know what God has in store for us or for the world. Which is scary sometimes but we do not need to be afraid.

These days life is strange and confusing and presents us with many puzzles to ponder and maybe some absurdities that pull us up short as we wonder what it all means and how we are to live in these difficult and trying and “I just don’t get it” times. The ground shifts daily and I know I’m tempted to worry and wring my hands. So maybe this is a good time to remember the sower flinging out those seeds and leave off the judgment and the self-justification and just marvel, marvel! at how actually out of all this change and turmoil and yes chaos - remember that God created the world out of the chaos, that God is always about new life born out of disaster - the seeds of new life, brave new life, “crazy but it just might work” new life are flying everywhere, flying all over the place these days -

and wonder, simply wonder, without judgment and without fear, just what and where they’ll grow.

I love this parable/allegory/whatever. But I don't think "What kind of soil am I?" I think "Which result (for want of a better word) resonates with me?"

For me, it's the seeds that fell among thorns, the ones that started out well but were stymied and distracted by the challenges of everyday life. For example, resolving to read/pray Morning Prayer every day...and then something comes up or I oversleep (too easy during this lockdown) or....

Thank you for reminding me that God has created this beautiful and remarkable universe--this "Earth and all Stars" (one of my favorite hymns)--out of chaos, out of nothing, and continues to cause new things to come into being.
July 13, 2020 at 6:09 PM

Penelopepiscopal said…
Thanks for your comment - it's wonderful how these stories bring up different things for us in our own lives.
July 14, 2020 at 10:21 AM