Mercy will save us all 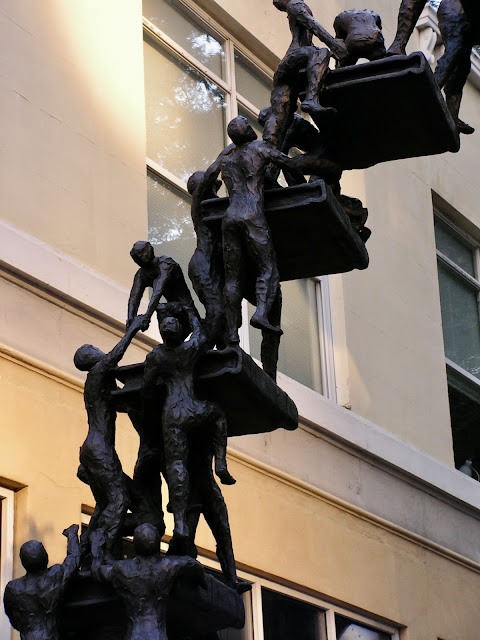 Today is the last Sunday of the church year and it is traditionally known as Christ the King or the Reign of Christ. Advent begins next week and we embark a new year of readings on Sundays from the Gospels of Mark and John.

But today we get one last passage from Matthew, which people tend to call the story of the sheep and the goats, and it’s the third of the three parables of judgment in this section of Matthew that we’ve been reading this month. Each of these stories shares a similar feature - the return of a long-absent powerful figure - the bridegroom, the wealthy master and today the Son of Man - and the judgment he renders upon his return.

In this story, this culmination of judgment stories, we find that everyone is surprised by what the judge declares. The ones who turn out to be awarded the kingdom and the ones who are judged accursed are equally mystified by his pronouncement.

They were astonished to learn that their treatment of what Jesus called “the least of these” was the key to living in the kingdom of God. They were surprised that practicing mercy in their daily lives was what had really counted. They were unprepared for the news that Christ is found in the bodies of the lost.

So on this day when we consider the reign of Christ, when we consider life under the rule of Christ the King, we hear Jesus say these familiar yet strange words, if you did it to the least of these, you did it to me, and we are invited to imagine what it looks like to live under the reign of Christ. We are invited to see without surprise that the divine kingdom breaks into the present when the hungry are fed and the naked are clothed, when the sick are cared for and when the prisoners are visited and are set free. That’s what the kingdom looks like.

Remember Mother Theresa? This parable drove her life. She said she did what she did working in the slums of Calcutta because she knew she was serving Christ when she fed an emaciated man or held a dying child or nursed a homeless woman who was desperately ill. She had many doubts about where God was in her own life, it turns out, but she never wavered from her affirmation that it was Christ whom she served through attending to the bodily needs of the destitute and the starving. It was these words of Jesus that drove her life’s work and ministry and she must have had faith that mercy was what was required of her, even when she felt that God was far away from her and that it was all a great struggle. She must have still felt that seeking God meant seeking the lost and that mercy was the key.

But we all can’t be Mother Teresa. In Ann Patchett’s latest novel, The Dutch House, the narrator Danny’s mother abandoned him and his sister and their father in order to go to India herself and serve the poor. Danny was bitter about this for what he thought would be the rest of his life, and when his mother finally returned when he was middle aged, he did not give up his bitterness as his sister did.

His mother did not say much about her life in those intervening years, but one day she did admit that the India effort had not worked out so well. She had taken a ship to Bombay, but Mother Teresa was in Calcutta and she had no idea how to reach her. So she had returned to New York to serve the poor there, but in her shame had not reconnected with her family until now when her daughter was gravely ill and her husband was long dead.

In an ironic twist, her last act of mercy was to move in with, in order to care for, the woman who had replaced her, her husband’s second wife, a cruel woman who had rejected her stepchildren (Danny and his sister) and alienated her own children and who had now descended into dementia. She had learned that the least are everywhere and you didn’t have to take drastic action to find them. They just showed up in your life and when they did, your job was to extend them mercy. Maybe that was a strange thing to do in this world, but she knew it had to drive her life. Most people called her a saint. But her son called her the woman who abandoned him.

And then one day, when he was visiting the two old ladies as he eventually and somewhat surprisingly found himself fall into the habit of doing, one woman doing the dying and one woman doing the caring for her bodily needs, Danny just kissed them both as he was leaving to go home, and he found that his bitterness was gone.

The sheep had just done what the shepherd had showed them and that was to extend mercy to those who were hungry or thirsty or naked or sick or in prison. And this, to their surprise, turned out to be the key to the kingdom. But the kingdom is always there and its work is being done even when we are not paying attention. And as mercy spreads from that kingdom into our busy noisy angry bitter grieving cruel world, slowly but surely, it will be mercy that saves us all.