To see as Jesus sees 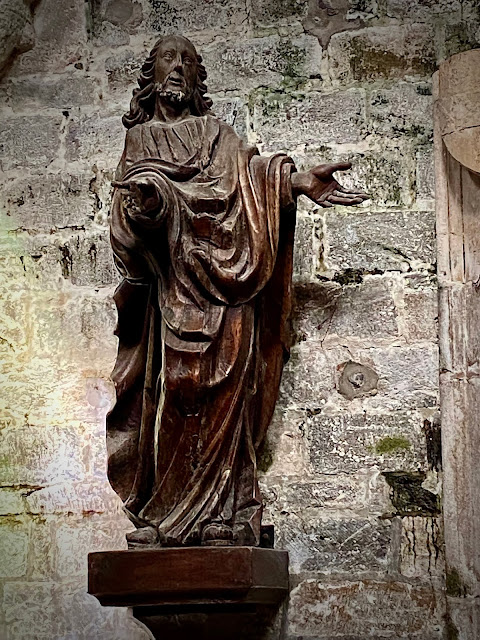 Over the last three weeks, we have been on a journey with Jesus as he headed to Jerusalem, and we have witnessed three significant encounters. The first one was with the young man who had many possessions. He asked Jesus what he must do to inherit eternal life. Jesus told him that he needed to let go of those possessions so that he would be free to follow him. The man went away, sad, because he didn’t like that answer, and Jesus remarked to his followers there gathered how hard it is for those with wealth to enter God’s kingdom.

The second one was with two of his disciples, James and John, sons of Zebedee, who also had a request of Jesus. They wanted Jesus to let them share in his glory, one on his left and one on his right. They showed that they did not understand who Jesus was or what to ask him for. Instead of eternal life, they wanted glory for themselves. And Jesus remarked that their calling was actually servanthood.

Now today, Jesus is coming to the end of that journey to Jerusalem. He’s at Jericho, the ancient city that was the gate to the promised land. And on the side of the road sits a blind beggar who has nothing. He doesn’t even really have a name, because Bartimaeus as he is called just means “Son of Timaeus.” The only thing he has is a cloak, which surely is his most precious possession - his shelter from the elements and protection from the cold, not to mention perhaps his chair and his bed. And Bartimaeus does know who Jesus is - he calls him Son of David, meaning Messiah, and he knows what he wants from him. He wants to be restored, to see.

And when Jesus calls to him, Bartimaeus throws aside his cloak, his one and only, but greatly treasured, possession, and he asks Jesus simply to heal him. His faith was such that he knew he could let go of that cloak and that he would get it back again - and more - when he was restored. He asked the right question and he received the restoration of his sight and everything that would go with that restoration in his first-century world. And his response was to follow Jesus right then and there, into the promised land. With God, all things are possible. Jesus didn't even need to make a remark after that.

But as I said last week, these stories tend to focus on the seriously marginalized. It is indeed good news that they are especially picked out to be restored, to be freed, to be healed, but it also may leave us wondering, what about us? What about those of us who are not marginalized? What are we supposed to do.

And the answer of course is still to follow Jesus. But how?

Well, today’s story gives us a way. Today we not only see Bartimaeus transformed, but we also see the crowd around Bartimaeus undergo a transformation as the story unfolds. That happens in just a couple of sentences, but it’s worth a second look.

In the beginning, when Bartimaeus is on the side of the road shouting out to Jesus and asking for mercy, the crowd tries to shut him up. We are not told why, but here are some possibilities. Perhaps the crowd is ashamed that there is a beggar among them. Or perhaps the crowd feels it should protect Jesus from people like Bartimaeus, believing he would be in some way contaminated or diminished or might even be harmed by this guy who is clearly NOT favored by God because if he were, in their thinking, he would not be blind and begging. Or perhaps the crowd just disapproves of the beggar and wants to keep him on the margins, shut him up and make him go back to being invisible so that he won’t ruin the day with his cries. Maybe they disapprove of his lifestyle or look down on him because he is disabled or are resentful that he is interrupting their experience with his need. Whatever the reason, they are not able to put themselves in his shoes and imagine life from his perspective.

But then Jesus takes note of Bartimaeus. Jesus hears his cry and tells the crowd to call Bartimaeus to him. And this effects an immediate and profound change in the crowd. They see that Jesus has heard the cry of this man, that Jesus noticed this man, that Jesus wants to connect with this man. This changes everything for them. Suddenly they see Bartimaeus as someone Jesus wants. They see him as someone worth Jesus’s notice. Now things are different and they see Bartimaeus in a new light. They go from wanting him to go away, to shut up, to not mess up their experience, to showing both mercy and genuine support. “Take heart,” they say! “Take heart, he is calling you, get up and go.”

So you see, it is not just the downtrodden who are the recipients of Jesus’s mercy. It never is. We are not a bunch of monads running around unconnected to one another. We are all embedded in society, in community, and what happens to any of us affects all of us. Those of us who are privileged, which basically means those of us who don’t have to think about things like poverty or discrimination because we do not experience them ourselves, often do not recognize our privilege and are therefore often blind to the experiences of others. We imagine that they have the same resources as we do, the same opportunities, the same perspectives. And we imagine that what happens to them doesn’t have anything to do with us. But even the most privileged are nonetheless diminished when our society tramples the poor and casts people out because hatred and scorn and greed taint what they touch. They diminish the world and they diminish us.

When Jesus shows up, things change. Bartimaeus asks to be able to see. We should ask to be able to see, too, to see others, all others, especially the “others” for whom we may have scorn or disdain, those others whose perspective and experiences we have not had, and see them as those of whom Jesus takes notice, as those whom Jesus wants. Because when we see others in that way, the way that Jesus sees them, we too will be transformed.