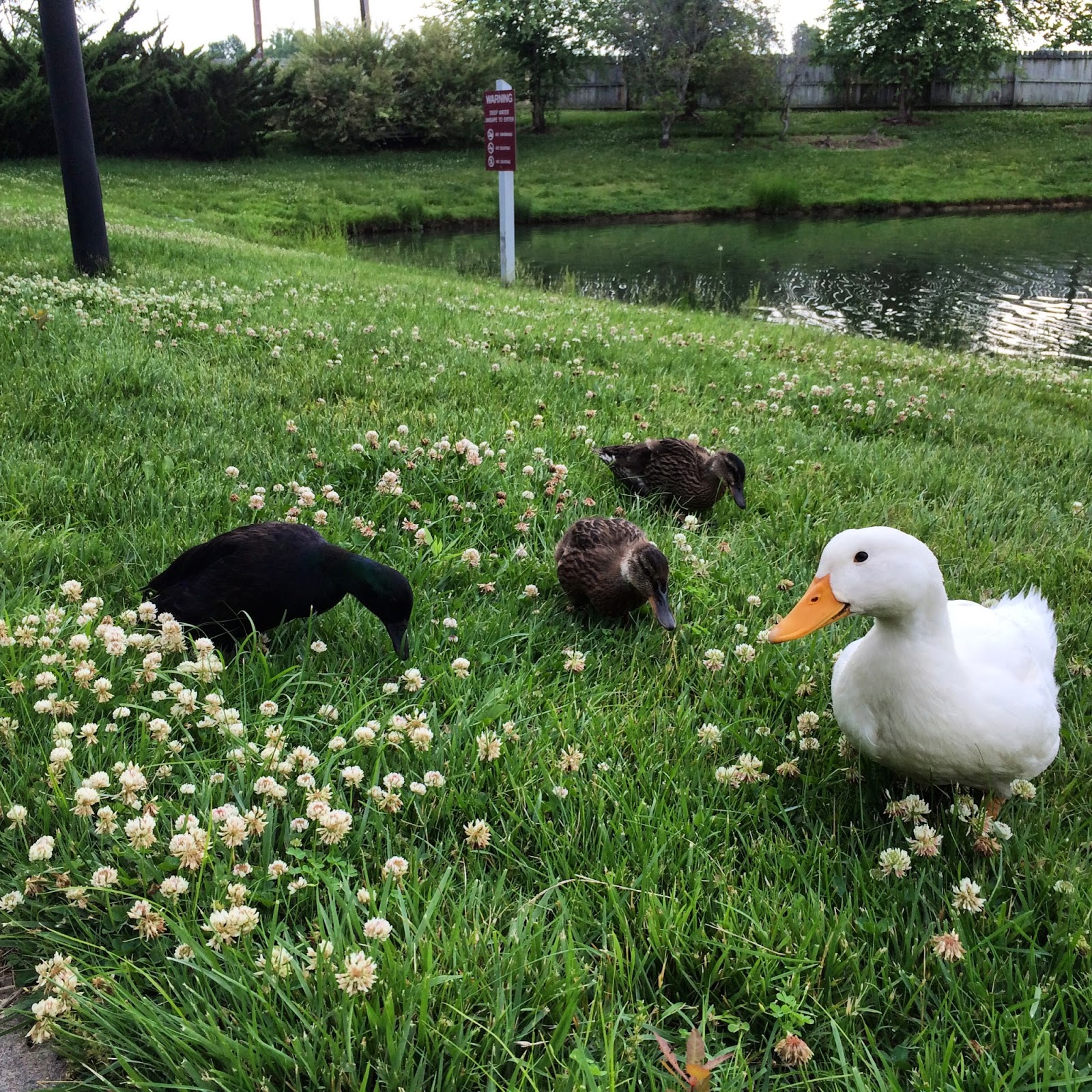 So, the other day, I wrote about the new ducks that came to live at our pond. Here's how things have shaken out.

The fuzzy yellow duckling has now become a large white duck. The two mallard ducklings (the one surviving baby of the original brood of five that were born a few weeks ago plus the one surviving from a group of babies brought by the man who also brought the white duck and the black one, a Cayuga) are the white duck's constant companions. They follow him/her around all the time and they all sleep together, eat together, swim together.  The Cayuga duck often hangs out with the two babies plus the white duck; however, when the parents of the one mallard baby show up, it likes to hang out with them. After all, the white duck and the mallard ducklings are all kids; the Cayuga and the mallard parents are adults.

The mallard parents, however, once they allowed their duckling to hang out with the other ducklings, pretty much went to Las Vegas or something. I see them at the pond every so often (at which time the Cuyaga duck will follow them around) but more often than not they are absent. Some of the neighbors are pretty judgmental about the mallard mama. First of all, she lost almost all her ducklings and then she seemed to abandon the only one that survived. Others figure that she pretty much was traumatized by the loss and never really got over it. Who knows what goes on in the minds of mallards?

And so these four in the picture are, by necessity perhaps, now a family. None of them are related to any of the others. But they are a family nonetheless. I like it.

Some of my friends and family have mentioned that they know I am going to miss the pond and all its residents when I move at the end of this month. That is true. I will really miss the pond. It has been a place of joy, and solitude, and excitement, and sadness. I've walked many, many miles around it hundreds of times in all kinds of weather. I've read books on the bench and talked on the phone while I walked or sat. I've photographed its residents - turtles, snakes, birds, bunnies - and watched them grow and play and, in the case of the big bullfrogs, get eaten by the great blue heron. I have loved living with this pond just a few hundred feet from my house.

But I haven't moved yet. And so I get to enjoy watching this duck family and all their friends and neighbors for a few more weeks before it's time to say goodbye. It's just a little pond.

But it's my pond.