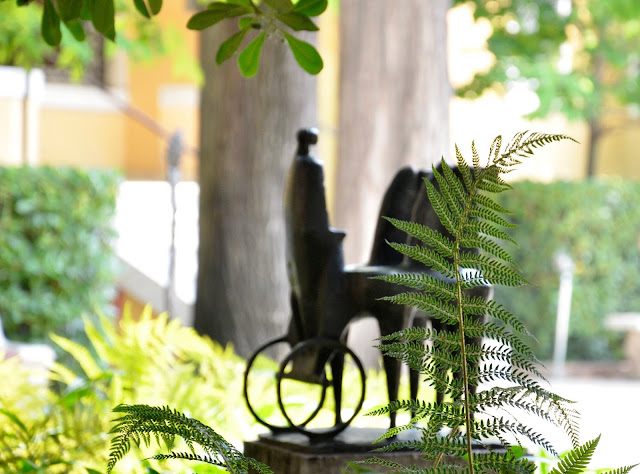 I was fascinated by this sculpture in the garden at the Peggy Guggenheim Collection in Venice. It's called Chariot (probably not a big surprise there), by Fritz Koenig, 1957.  You can read about him here. I didn't realize until I read up on him that Koenig is the sculptor who created The Sphere, which stood between the towers at the World Trade Center and, though it was damaged in the 2001 attacks, it was not destroyed and was reinstalled in Battery Park.

I have better photos of the actual sculpture, but I kind of liked this photo for the atmosphere. The slightly out-of-focus chariot is fading away.....

Whenever I see a chariot, I think about the Book of Exodus, about the Egyptians and how God caused their chariots to become stuck in the mud as they chased the Hebrew people into the path created through the Red Sea, and how when the waters rushed back over them, they sank like stones.