The Epiphany in 6th Century Art 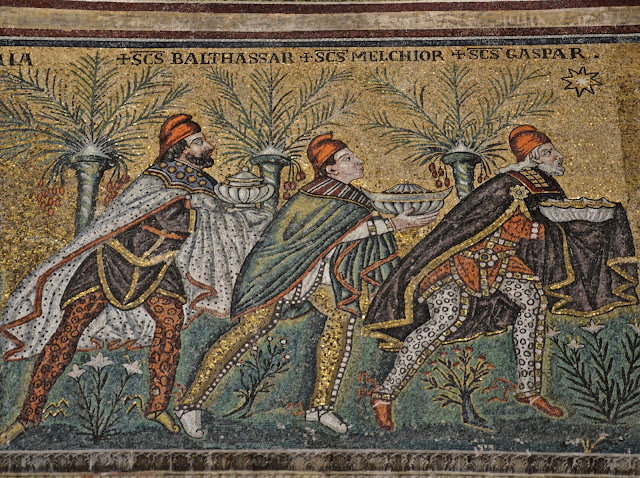 And so the magi arrive, wearing interesting hosiery (leopard skin prints?), Phrygian caps, and bearing three gifts. Tradition names them Balthassar, Melchior, and Gaspar - some think that this mosaic (finished in 675 C.E.) in the Basilica de Sant'Appolinare Nuovo in Ravenna, Italy, is the first to portray them with these names.

In the Bible, there are only three gifts brought by an indeterminate number of nameless magi or wise men "from the East." Many scholars believe they are Zoroastrian priests who came from the Parthian (formerly Persian) Empire (present day Iran and Iraq). The gifts, however, suggest the Arabian peninsula where the plants from which came the resins that make myrrh and frankincense. (Presumably, gold is widely available.)

After the magi encountered Jesus, they were warned in a dream not to go back to King Herod and tell him where Jesus was. Instead, they went home by another way.

Perhaps we might consider another route for ourselves, now that we have had twelve days to consider the Incarnation and what it means to us this year for God to come and live among us.

Charles Kinnaird said…
I was attracted first by the ancient artwork, then your last statement really captivated me: "Perhaps we might consider another route for ourselves, now that we have had twelve days to consider the Incarnation and what it means to us this year for God to come and live among us."

Penelopepiscopal said…
Hey, Charles! I love that carving at Artun. I thought I'd posted it here one year but maybe I didn't.
January 7, 2017 at 5:31 AM