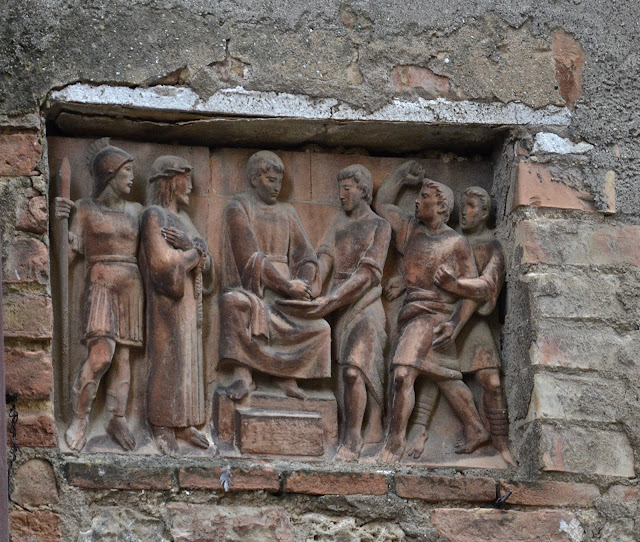 And so we look on the one whom they have pierced. We look on his bleeding side, his bruised face, the welts on his back. We see him crushed by a lethal combination of official state power fearing for its own survival and the power of the mob who have turned their backs on love and compassion. (“If you release this man, you are no friend of the emperor,” the people hiss. “Shall I crucify your king?” Pilate sneers.)

We hear them accuse, we hear them demand punishment, and if there is a voice somewhere crying out “Stop! Why are you doing this?” that voice has been drowned out. Together Pilate, the police, the chief priests and the crowd come together as judge and jury who condemn what they do not understand and brutally bring about the end of a human life.

What is it about overt displays of power that attracts us? Or at least persuades us to tolerate them? What makes us shrug at injustice or look down at our shoes in the face of mockery and posturing and hateful condemnation? A question I heard public interest lawyer Bryan Stevenson ask a large crowd at VCU on Wednesday night haunts me: Why do we want to get rid of broken people?

I believe we despise weakness and look down on vulnerability and cheer on the powerful who spew vitriol and disdain and revel in (and indeed seem proud of) humiliating others, because deep down inside we are afraid.

We are all caught up in this in one way or another, this narrative that says we need to be afraid. Some of us are implicated as power players, concerned with our own interests. Some of us have been victims, and we may hear this story and feel our own humiliation and pain. Some of us are just standing by in our own bewildered grief trying to hold onto some kind of hope.

It seems to me, as we look on this heartbreaking convergence of hate and fear, violence and brokenness, that this is the way Jesus draws us all to himself: gathering us all together the way a crash, a spectacular smash up, so powerfully draws the gaze and attention of us all - perpetrator, victim, and by-stander alike - to say “Look. This is what the world does. But this is not what I intend for you.” This is not what God wants for us, to live in fear, to be so afraid that we turn away from love and compassion and instead put our faith in some strong, but ultimately straw, thing that does not care for us.

Power itself is on trial today. Neither Pilate nor the people understand that power over Jesus’s life and death rests with Jesus and no one else. The judgment is not on Jesus but on the world that does not recognize the revelation of God in him, a man who gave water to the thirsty and sight to the blind and love to sinners and life to the dead. While standing before Pilate at his trial, Jesus says that he came to testify to the truth and Pilate’s answer is “What is truth?” He wouldn’t recognize the truth that was standing right in front of him. Because his concern was keeping his power and asserting his authority, he was not open to transformation in the presence of truth and love.

And the people do not understand that ultimately neither Pilate nor the Roman soldiers nor any of their institutions can be the protector they long for. The powerful will sacrifice life for political expediency. The Empire will fall and so will the Temple.

The truth is, there is no stronger power than love. It is only love and mercy and hope that can protect us from the degradation we are seeing today. We are all degraded by hatred and violence. Hatred and fear warps everyone. Of course we long for a protector.

Let us grieve and lament, and be gathered together into the tomb, perpetrator, victim, and bystander together, and together let us there summon hope, for the truth is that out of this utter darkness salvation will rise.