Perceiving Holiness: Is it You? 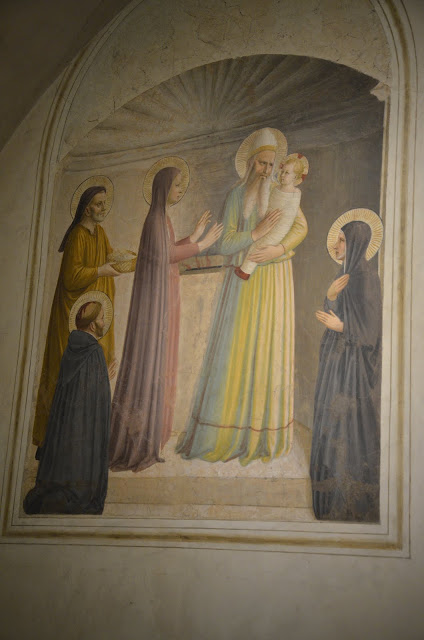 In the mid 15th century in Florence, Italy, the friar and artist who later became known as Fra Angelico - the angelic brother - was commissioned by Cosimo de Medici to paint frescoes in the Dominican priory of San Marco. In addition to the many large paintings in the public areas of the priory, the angelic brother also painted frescoes in more than fifty of the friars’ cells.

Given that the friars, who were members of a preaching order, took vows of poverty and humility, this seems like an extravagant contradiction. But the founder of the Dominican order, the Spanish priest St. Dominic, believed in the power of art as an aid to prayer.

And so each cell contains a masterpiece by Fra Angelico, a scene in the life of Jesus. To me, this would seem like having a priceless Picasso or Rembrandt in one’s dorm room, but for the friars, the paintings were intended as images for meditation and contemplation to support their work as preachers.

The fresco in Cell #10 depicts the scene of Mary and Joseph presenting Jesus in the Temple. Joseph holds a basket containing the two pigeons for the sacrifice and Simeon holds Jesus, who is swaddled except for his feet, which are sporting what looks like tiny red shoes. Mary reaches out as if to steady Jesus if old Simeon should waver, and Anna kneels nearby. All eyes are fixed on Jesus. Jesus himself looks solemnly into Simeon’s face so that their mutual gazing becomes the focal point of the painting. That mutual gaze confirms for Simeon that he now has seen the savior and that all the world will also see this savior, this light that will enlighten the nations and is the glory of God’s people.

I love that mutual gaze. The swaddled Jesus simply looks tenderly at the one who holds him. And Simeon is clearly concentrating, discerning, his face with its bare hint of a frown close to Jesus’s face, their eyes meeting, beholding one another in (for the moment) silence while the busy Temple goings on fade into the background.

All this seems to me a lesson in perceiving holiness.

When one looks at Renaissance paintings, the saints, the holy people, are depicted with haloes. Jesus’ halo always has a cross in it, so you can tell it’s him. So one gets some help in perceiving from the artist who has made it clear who is holy and especially who is The Holy One of God.

In life, this is harder. We do not always recognize holy people or holy moments. Thomas Merton, who famously had a vision on the corner of Fourth and Walnut Streets in Louisville, suddenly seeing the beauty and sanctity of all the ordinary people out doing their errands on an ordinary day, wished that everybody could realize this wonderful thing. “But it cannot be explained,” he wrote. “There is no way of telling people that they are all walking around shining like the sun.”

But as he moved deeper into the theology of incarnation, that the Word through whom the whole cosmos was created became flesh and lived among us, Merton also wrote this poetic reflection about holiness and saints: “The forms and individual characters of living things, of inanimate beings, of animals, flowers and all nature, constitute their holiness in the sight of God. Their inscape is their sanctity, the imprint of God's wisdom, God's reality in them. The special clumsy beauty of this particular colt on this day in this field under these clouds is a holiness, it declares the glory of God. The pale flowers of the dogwood outside this window are saints. The little yellow flowers that nobody notices on the edge of that road are saints. This leaf has its own texture, its own pattern of veins, its own holy shape. The bass and trout hiding in the deep pools of the river are canonized by their beauty and their strength. The sea too is a saint who praises God without interruption in her majestic dance. The great, gashed, half-naked mountain is another of God’s saints. Alone in his own character, nothing else in the world ever did or ever will imitate God in quite the same way. That is his sanctity.”
Some say that life imitates art, that art shows us what to look for in the world and influences what we see. What if we might go around in the world looking for haloes, for holiness, in people and also in creation? What if we perceived haloes around the yellow flowers and the rainbow trout and the person sitting beside us and the slow cashier at the grocery store?  What if we gaze at the colt and the cat, the sea and the sky, the tiny baby at the border and the wizened and forgetful old man on the park bench and recognize that every day, everywhere, even as the world is busy with its errands, we are surrounded by holiness, by that which bears the imprint of God? How would we treat them then, these people, these living things, this holy Earth? 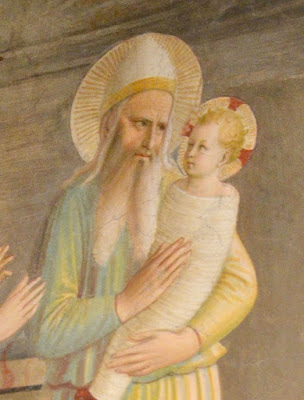 As lovely as this question is, I am still challenged. It is one thing to see a halo on a star or a rose or the Holy Mother of God. It is another to see a halo on a person with whom I deeply disagree; that, I am tempted to resist hard every day, to say no to the command to love and see the holiness in my neighbor. I’m sure then it must be a lifelong endeavor. Simeon and Anna waited all their lives to see this glory of God. In the story “A Good Man is Hard to Find,” Flannery O’Connor’s character “the grandmother” only recognizes her deep connection with “the misfit” in the seconds before she dies at his hands.

But for all the times I want to say no, I hope to recall Simeon gazing intently at Jesus with his question: Is it You? And to see clearly again as Jesus tenderly gazes back with his answer: Yes. Yes. The answer is Yes.
Email Post
Labels: art Bible stories florence meditations sermons

anne said…
so glad there will still be a way to follow your thinking after i don't see you at st. Stephens regularly.

i've often wondered how you look so lovingly at each of us as you give us communion. this morning as you preached, i thought, 'oh, she's just seeing the holy in each of us.' that makes sense to me!
February 3, 2020 at 7:31 AM

Ray Barnes said…
A lovely and very unusual post Penny. I haven't read anything from you for a very long time but it is worth the wait. Thankyou.
February 4, 2020 at 4:46 AM

Penelopepiscopal said…
Thank you Anne - I'll miss being part of the St. Stephen's community! But I hope I'll be able to post more often in the future!

Ray - good to hear from you. I've had trouble commenting on my blog so sorry for the delay in responding to your kindness. As I alluded to in the previous comment, I am changing ministry settings and I hope to be able to post more often in the future!