Walking together in the dark. 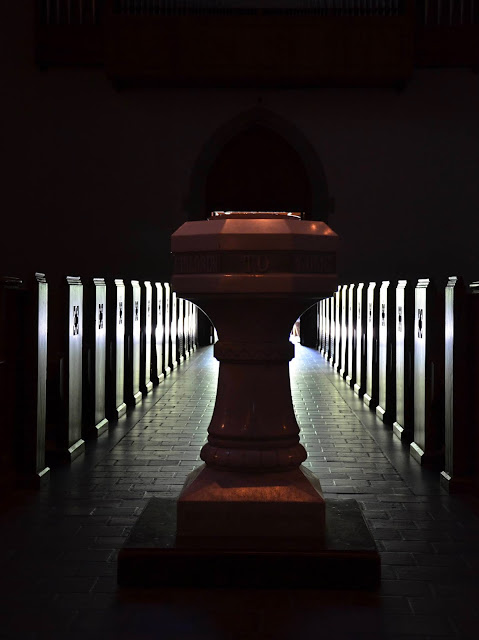 I grew up in one of those 1950’s ranch houses with the living room on one end and the bedrooms on the other and a long hallway in between. When I was little, our living room had nothing but a piano in it. I loved to play the piano in there. I liked how the sound echoed in the empty room. I would play and play until it was dark and my mom called out to me that it was time for bed.

Then I had to go down the long hallway to my bedroom. The hallway was dark. Really dark.

And I was terrified of that dark. I would stand there, looking down the hall, and feel the fear squeezing my heart, making it pound loudly in my chest. I don’t know what I thought might happen to me in that dark hallway but I was just so scared of it. I had a visceral response - even my legs would be all jumpy and I would dance around in fear.

Sometimes I would call out to my mom and ask her to go down the hall with me. If she walked with me, I wasn’t afraid. Sometimes she would come, but not always (if Lawrence Welk was on, I could just forget it). If I had to go alone, I would run down the hall as fast as I could and leap into my bed and wait for my heart to stop pounding. Later on Mom would come in to say goodnight and she would tell me that there isn’t anything to be afraid of.

But she was wrong. There was plenty to be afraid of. There still is. Shall I tell you my list?

Getting the answers wrong. Fire. Losing a pet. Being rejected. Losing a job. Losing a child. Divorce. Violence. Getting a serious diagnosis. Losing hope. Having a breakdown.

The whole world has a list, and it grieves me to see how entangled we are with our fears, so much so that we cannot bring ourselves to drag them into the light of day and let them go instead of allowing them to cripple us. It grieves me that my own fears often deafen me to the cries of others who are perishing.

But we’re pretty good at being afraid as human beings. If we weren’t, then “be not afraid” wouldn’t appear in the Bible so many times. Being fearful seems just part of life, I guess, or those verses would not be necessary.

But “Fear not” is not the same as “there’s nothing to be afraid of.”  There’s much more to it than that. The message is not simply “get over it and have some guts.” It’s not that there isn’t anything to be afraid of - there is. But in our stories “Fear not” is ALWAYS coupled with the assurance that God is with us. Fear not BECAUSE God is with us. Things might be scary, but we are not alone.

This doesn’t mean that all turns out well. The exiles still had to live in exile. Moses had to wander in the desert and died before reaching the promised land. Mary had to suffer Joseph wanting to divorce her and had her baby in a barn and then had to watch him die on a cross. Life was still hard. Disaster happened and people died. Even Jesus died and God didn’t stop it.

But God was with them. They were not alone in their suffering.

But I’ll bet they had no idea that the first thing they’d encounter upon arrival (the story told in the next verses after today’s reading) would be a raging naked man, out of his mind, in chains and living in a cemetery, and the second thing would be a herd of demon-possessed pigs hurling themselves off a cliff, followed by an angry mob running Jesus and the disciples out of town. Those would not have been big selling points for the trip. But the disciples went because Jesus called them.

Don't you care that we are perishing? they ask. Why are you afraid? Jesus responds. Don’t you know I am with you, even in the storm, even with the scary man in chains, even when you are rejected, even if you die?

And he calls us, too. He calls us to things so wonderful we cannot imagine and also things we dread or want to dance around. Sometimes things turn out to be glorious and sometimes they’re just failures.

Sometimes we are anxious and afraid. What should I say to a prisoner? Can I go to a neighborhood I’m not sure about? Can I talk about things that make me uncomfortable? Can I get through this illness? Will I survive this loss?

But God is with us in the boat. And Jesus saves. And the Spirit has come to be our comforter. These are the stories of our faith.

Still, just as I needed my mom to walk with me down that dark hallway when I was scared, we also need each other to be the hands and feet of Jesus on this earth today. We need to be connected to one another and to ever-widen our circle and bring into it all those who are yearning for healing and support.

We need to feed the hungry and visit the sick, as well as ask for God’s spirit to be with them. We need to grieve the dead, name our sins, and work for reconciliation. We need to support each other with our physical presence when one of us loses hope and be willing to talk about uncomfortable things when conversation is called for. We need to believe that listening to one another’s pain is essential when following Jesus and that the answer to hate and fear is mercy and forgiveness.

Part of being the beloved community is obeying the command to love one another: to tend to one another, uphold one another, accompany one another down our long dark hallways, individually and collectively. To be there for those who are perishing….

Who knows where Jesus is going to call us next. It may be a fantastic journey or a really scary ride across a deep, deep divide. But either way, because we belong to God and to one another, we can go where we are called even when we are afraid, because we will not go alone.