The Story of This Nativity Scene 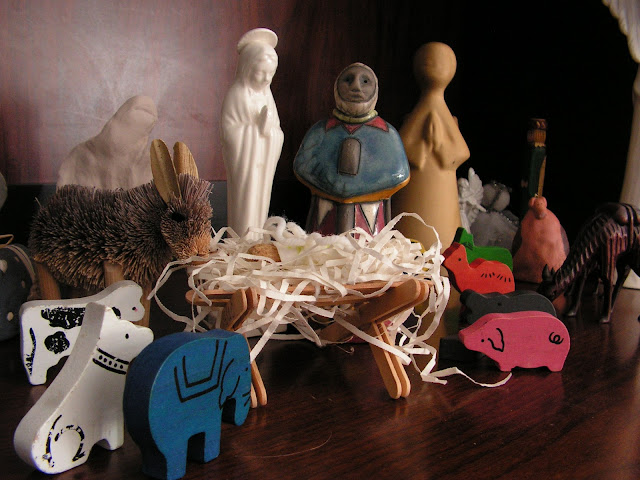 I have a collection of nativities (both freestanding sets and scenes as well as tree ornaments and other representations) in various styles and from all over the world.  I've featured a number of them in the  daily collect posts I've put up here during these days of Christmas.  But this nativity scene is my favorite.  It has an interesting history.  You can't even see all the figures in this photo, and besides that they sometimes change from year to year, but I'll give you the story of those you can see.

First of all, this is a Luke nativity.  Sort of.  There are no Magi (which is part of the Matthew story but not Luke) but there are angels (which are not in Matthew but are in Luke).  There are not any shepherds, however; to be a true, legit Luke scene, there ought to be shepherds, too.  Some of my nativities have shepherds, angels, and wise guys; most have Magi but no shepherds; most have some kind of animals; a few have shepherds and animals, and one or two have a star but no attending people.  But I digress. 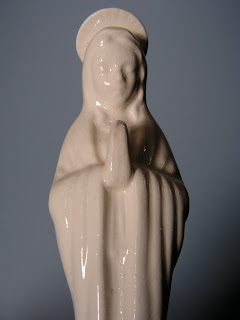 This nativity is founded upon the figure of Mary, a white ceramic Madonna which I received as a Christmas gift from either my Sunday school teacher or church children's choir director when I was in elementary school.  We're talking mid-1960's here, so she's old.  For many years, this Madonna was just about my only overtly religious Christmas decoration. 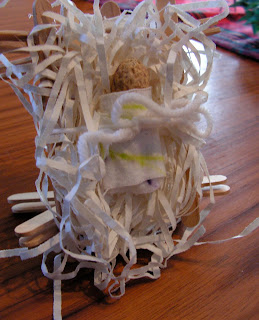 It's good for there to be a baby present in nativity scenes, and this Jesus made his debut in 1993 in the form of Peanut Baby Jesus, which my elder son made in Sunday school when he was three and we had returned to church and were becoming Episcopalians.  Peanut Baby Jesus is, as you might guess, made out of a peanut wrapped in a square of flannel (it has some marker marks on it which I presume are blanket decorations a la the imagination of a three year old who was rather attached to his own blanket at the time), lying in a manger made of popsicle sticks in a bed of shredded paper.  For whatever reason, probably because I was rather emotional about coming back to church with my own firstborn son, I immediately became attached to Peanut Baby Jesus and decided to start a family nativity scene with him and my Old Mary. 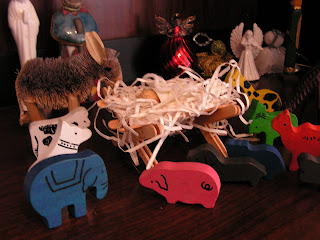 After that, we began to add various angels and animals.  You can see that a number of the animals look similar if not proportional - check out the dog who is larger than an elephant.  They came with a vehicle (it may have even been a shape-sorter truck) which crashed many times and became unsafe, so it seemed good that the freed animals might attend Peanut Baby Jesus in this set.  Other animals include a fabulous brush donkey added just a couple of years ago and two carved wooden llamas that a friend brought me from Peru.   There are also a country pig and sheep duo that were Christmas ornaments too heavy for the tree this year that joined the menagerie. Angels range from blown glass from Italy to an abaca (leaf fiber) angel from the Philippines, as well as two rather large ceramic angels that tower over the scene (one of which I had given to my mother but she gave it back when she downsized this year - they have their backs turned to us here), a pottery candle holder praying angel, a Moravian punched tin candle holder angel, two tulle-and-pipecleaner angels the children made at a Christmas craft table,  a ceramic violin-playing angel who has had to be repaired several times and so in the off season sits on a shelf rather than packed away, a paper angel head on a Christmas card, and a sort of fuzzy-featured clay angel I made myself (you can see her behind the fiddling angel here). 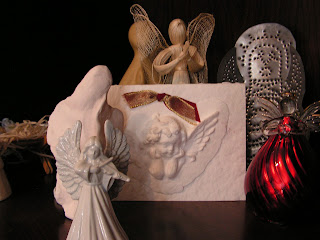 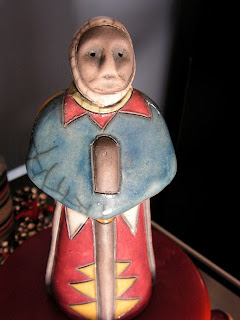 For a long time, we did not have a Joseph.  Marys are not that hard to find by themselves but Josephs are less common.  Plus it seemed that we ought to either make or find a Joseph the way we had done with the other figures.  We thought we might have to resort to a GI-Joseph or something of that nature - neither of my boys were GI-Joe fans, though, and we'd have to buy one and then I'd have to make clothes for it, and somehow I never got around to that.  (I'm not sure what this says about me that Joseph was basically ignored for a good many years.)  My husband (who perhaps felt that Joseph was more necessary that I did) finally ordered the one in the photo from a museum store catalog, I think.  He shares with Mary a ceramic nature, but he has a very colorful glaze.  I believe he came from South Africa.

A couple of people have commented on the interracial nature of our Holy Family (literally a lily-white Mary, a black Joseph, and a peanut-brown baby Jesus) but we think it's just right.  Jesus' birth is described in various ways, in order to signify the mystery of God-made-human, but the idea in Scripture is that this birth was somehow irregular, possibly scandalous, not the usual pregnancy or marriage or family. (Personally, we don't think interracial relationships are scandalous, but we note the symbolism.  In the tradition, even though it is not in Scripture, Joseph is considered an old man while Mary is a teen.  Not everyone considers May-December relationships scandalous, either.  There just isn't a facile way to say what we want to say about the nature and circumstances of an event in which God becomes human, the Greek and Roman myths about gods notwithstanding.)

Just so, our nativity scene is unusual, too.  It blends my old childhood Mary with an imported African Joseph and an expensive Murano glass angel with homemade peanut baby Jesus and with children's toy daschund and kitty and Peruvian carved llamas and handmade angels and a paper-mache star and folk art and classical art.   And that's pretty much how life is.

Even, no - especially - life in the Kingdom.