Shameless Plug: Naked, And You Clothed Me is now available! 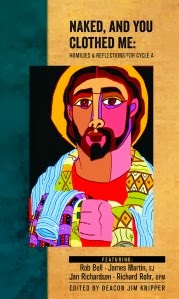 Last year I became involved in a project championed by Roman Catholic Deacon Jim Knipper of New Jersey who had a great idea to publish a series of books of homilies and reflections by an ecumenical group of clergy and laypeople. The three-volume series started with Hungry, And You Fed Me, which featured sermons and reflections to correspond with Sundays and feast days in the Roman Catholic lectionary for Year C. (The Revised Common Lectionary corresponds pretty closely.) The people whose sermons are contained in these volumes are called the Homilists for the Homeless. I am very proud to be the Episcopal representative in this group, having contributed four sermons to that volume.

Now we are approaching the beginning of Advent and with it another liturgical year - this time Year A. And so the second volume of this series, Naked, And You Clothed Me, is now available and it includes three of my sermons plus reflections from Rob Bell, James Martin, Richard Rohr, Carol Howard Merritt, and others.

The proceeds from these books benefits homeless ministries in New Jersey. The first volume was  awarded second place in the category of best book by a small publisher and garnered third place in liturgy from the Catholic Press Awards.

I have given a number of these books as gifts to friends and relatives and would like to suggest that you consider doing so, too. Remember, the proceeds benefit several homeless ministries in New Jersey.
You can purchase both volumes from the publisher by clicking here. (And note that the Year C volume is on sale!)

Check out our Facebook page to see all of the authors and each of the charities we are supporting through this effort.

Fran said…
So what's wrong with a shameless plug?It is for a good- no, make that great - set of causes. It is such a privilege to reside alongside you in these pages! I was just telling Jim about how much I love your blog. I may not comment often, but I do come by and am always given refreshment and wisdom.
October 18, 2013 at 6:46 AM

Penelopepiscopal said…
Aw, thanks Fran! so sorry we are not having another fabulous contributors' party in NYC ths year. Would love to see you. Thx for beg a fan of this blog, too. I appreciate it, and you!
October 19, 2013 at 10:21 PM