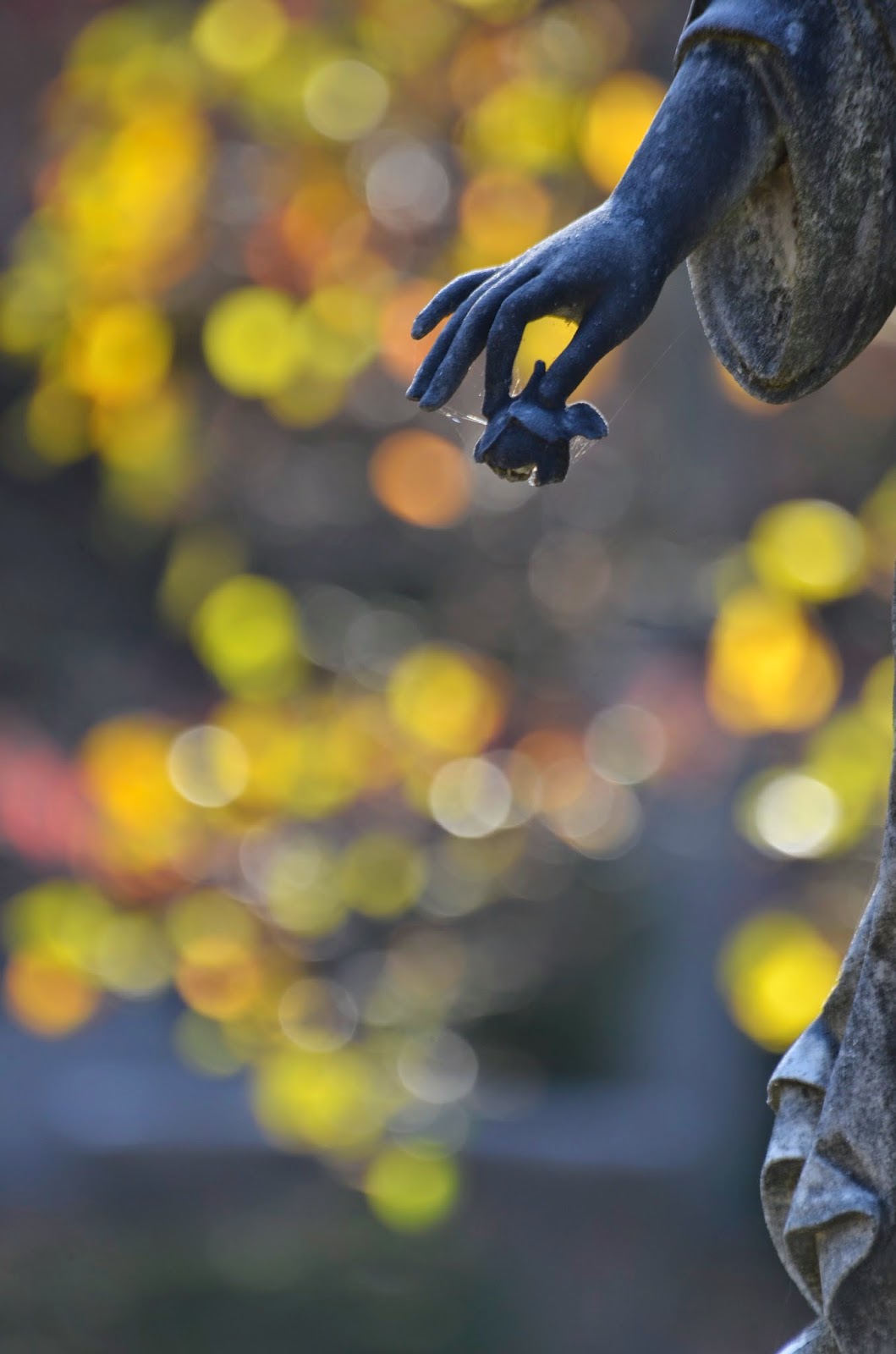 I spent some time in the Hollywood Cemetery in Richmond this weekend. I've been there before, both to wander around and to bury parishioners, but it was  particularly lovely on a cold mid-November morning as red and orange and yellow leaves were falling or had already fallen around us while we listened to a tour guide tell tales and point out some of the quirks and intricacies of the place.

Fall begins so beautifully with all the colors everywhere, but in a cemetery, the season can take on a more melancholy look as the leaves begin to fall in earnest.

Hollywood (formerly Holly Wood because of the holly trees) was opened in the middle of the 19th Century along the James River, out of town (at the time). There was concern that nobody much would be buried there, but that changed quickly after 1861. There are more than 18,000 Confederate soldiers and 38 generals buried in the cemetery. It is also the final resting place of two U.S. Presidents, John Tyler and James Monroe, as well as clergymen, bishops, and thousands of "regular people."

There is much beautiful (and some sort of odd, truthfully) statuary in the Hollywood Cemetery - many angels holding up lights (or used to before their arms broke off) over entire plots, and lambs lying peacefully on top of small gravestones. Angels are the most popular statues, not surprisingly. We like angels and want them to watch over us night and day, forever. Some of them seem to only express otherworldly calm while others sit in postures of grief.

I particularly liked this one, an angel neither standing sentinel nor sitting in report, but active, engaged, about to drop a rose upon a grave.

Perpetua said…
I like cemetery angels too, Penny, but they seem to be seen much less nowadays over here. I love the photo.
November 17, 2014 at 4:08 PM

Penelopepiscopal said…
Thanks, Perpetua. Many of these angels are quite old - you are right that such things are perhaps out of fashion these days.
November 17, 2014 at 4:57 PM

Nancy Wallace said…
Last Saturday I sat in the graveyard of a church, surrounded by fallen oak leaves - a symbol of dying but also a reminder that the dying year was part of the preparation for the new life to come. I love your photo of the angel's hand about to drop a rose. At first glance I thought it was an angel delicately holding a tortoise! To that idea too I thought, how lovely!
November 18, 2014 at 4:21 AM