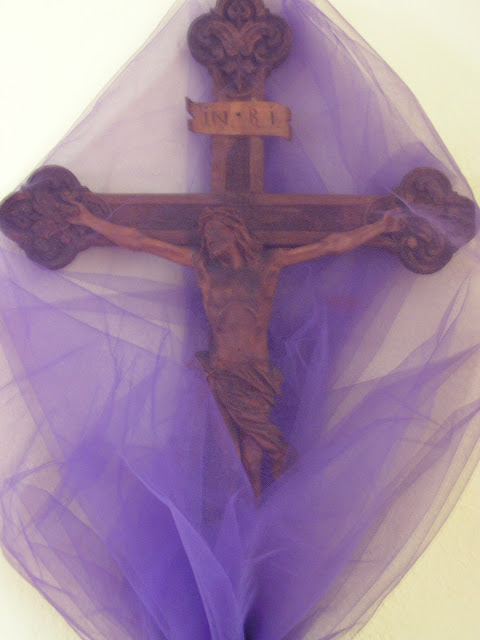 The definition of cognitive dissonance is the feeling of discomfort when trying to hold two contradictory ideas together in one's head at the same time.

So I am faced with some choices. I can choose to believe that the other person was not really hurt by my actions, that she knows that I was just teasing, even though I wasn't but I'll pretend I was, which will enable me to continue to believe that I am a good person.

Or I can choose to believe that the other person deserved to be treated badly, which gives me another excuse to continue to believe that I am a good person. I may try to justify and excuse my behavior: I wasn't really bad if I was just being mean to a mean person.

Any of those choices will resolve the tension, will eliminate the dissonance, the attempt to hold together two ideas that don't go together.  Either I am bad or I am good; either the other person is hurt or not hurt. But you can see that just trying to eliminate the tension doesn't get at the truth.

The only way to get at the truth is to be willing to revise one’s belief in light of one’s experience.  But that's really hard. We don't like revising our beliefs. It can be embarrassing. We sound like we are "flip flopping." Or we are not being consistent. Sometimes we will fight to the death to defend a belief just because we can't bring ourselves to revise it.

This may sound silly, but it happens all the time. People discover that their beliefs don't hold water after having experiences that contradict those beliefs. And then they (ok, we) just don't know what to do.

Today we have a perfect example, the story of the man born blind. (John 9:1-41) The disciples first ask the question, who sinned to cause this person to be born blind? Because their belief system says that bad things happen to bad people; this is the way God works. Blind people are blind because they sinned, and if this man was born blind then maybe he is paying for his parents' sin. That's a common belief system, not just in the first century but even today some folks secretly believe that this is how God works.

But the more extreme example of cognitive dissonance is the experience of the Pharisees. They, too, believe that blind people are being punished for sins. They also believe that good Jews keep the Sabbath in the way that they think people are supposed to keep the Sabbath and that the Messiah comes from the House of David and will come out of Judea and will follow their rules. Jesus, a nobody from nowheresville Nazareth in Galilee comes along and heals the blind man on the Sabbath. Uh-oh. They experience cognitive dissonance.

And so some of them say, Jesus is a sinner, and he didn't really heal this man. The man was either not healed or else he wasn't born blind to begin with. A sinner cannot heal a blind man. That's their belief and they're sticking to it.

And yet the man is healed. After all their questioning of him and his parents, there the fact remains that the man was healed, and he was healed by Jesus, and it happened on the Sabbath.

So they kick him out. They return to the original belief - blind people are blind because they have sinned and this man was born blind so he was born in sin. Even if Jesus healed him, then Jesus is a sinner, too, because he can't be from God because he doesn't observe the sabbath.

They cannot look at the fruit - healing - first, and then decide how to see the actors in the drama. Someone is healed, but they do not rejoice in that and instead choose to pick on both the healer and the healee, they choose to make a ad hominem attack on both Jesus and the man. If you can't attack the healing, if you can't revise the belief, then attack the people.

And so they kick the man who was formerly blind out of the synagogue. That way, they can continue in their beliefs, despite the new experience.

We see this all the time, don't we? People attacking other people, refusing to reconsider their own belief systems in light of someone experience. They will discount that experience, deny that the other person had the experience, make an excuse about the other person's experience and if nothing else works then just launch a personal attack. And if possible, kick you out so you won't be there in front of them where they will have to look at you and experience cognitive dissonance again.

We know, they say. We know all about you, just as Nicodemus said a couple of weeks ago. We know about you already so don't confuse us with the facts.

There's a lot of confusion in the world this week. We are not sure what or who to believe about the things that are happening around us. As the story of the new coronavirus continues to unfold we may be challenged to revise our beliefs. We are in the midst of a very new experience and are being asked several times a day it seems to revise, to change course, to refine beliefs and practices, to learn how to do what we usually do in a new way or to refrain from doing what we usually do at all. We are being asked to change our beliefs and our behavior in light of new experience.

This includes church. And one of the beliefs we have held onto dearly as Christians is the centrality of regular reception of the Body and Blood of Christ offered in the sacrament of Holy Communion. We offer and partake of the Eucharist every week if we can. We hold it to be central to our worship. We do not withhold it from either sinner or saint. It’s normative.

And yet, now, for a time, we cannot offer or partake of Holy Communion on Sundays or any other days, not even Easter.

So we are experiencing cognitive dissonance. We believe we are the body of Christ because we gather and receive the Body of Christ as part of our worship. This is what Episcopalians do. So if we are not gathering and receiving, are we still the Body of Christ? Are we still Episcopalians? If we abstain, if we do not receive for many weeks, if we remove Holy Communion from our lives, will we also remove the revelation of Christ from our experience? We say or sing sometimes: Be known to us Lord Jesus in the breaking of the bread. We say we are one body because we share one bread and one cup. So this is confusing, contradictory even; isn’t gathering for communion central?

So, now, then, first we must remember our baptisms, our first experience of sacrament. We are members of the Body because of our baptism.

And then we must pay attention to our experience in this new situation. We have start with the fruit that is being born even now. We have to look around us in this time of deprivation and see what is now revealed as beautiful and holy, for God is revealed in many ways, and we are still bound together, one Body.

New experiences challenge previously held beliefs. It was true for those around Jesus, who believed the savior would kick out the Romans but who experienced God through one who went about healing the sick and befriending the stranger and being killed by the Romans. They experienced a man who made himself vulnerable, a servant, who opened the eyes of those who were formerly blind so that they might see him standing with them when the rest of the world rejected them.

This is a jarring time. But it is still a holy time and we must revise our belief that if we aren’t gathering and receiving communion we’re not having church. We are for a time, but not all time, going to deprive ourselves for the good of our community. We still have holy work to do, to keep each other safe, to call our friends and neighbors who are isolated, to support those who have found themselves out of work and low on resources and hope. We have to be church in a new way. We are still the Body of Christ being broken for one another in this scary, dreadful time. We still belong to God. We still will be transformed. God will still raise the dead.

And the day will come when we will again gather around the altar and say Amen as the bread touches our hands and the wine touches our lips. And on that day we will all say together, isn’t this beautiful, too? Thanks be to God.