Bringing the strength of God 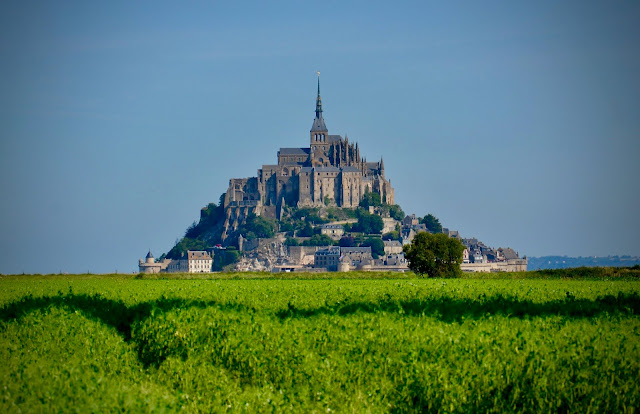 A few years ago, my husband and I made the pilgrimage to Mont Saint-Michel, that mystical holy place, a 240 acre island rising out of the bay a half mile off the coast of the border of Brittany and Normandy in France. We had read in our travel guides that we should arrive very early in the day and yet we didn’t, and so it was very hot, just as the travel guides said it would be, and I was alternately mesmerized and exhausted as we trudged across the causeway and up the flights and flights of stairs to reach the pinnacle of the island, the Abbey, imagining what it might have been like in the 10th century when pilgrims wore a lot more clothing - long dresses with cloaks and hats. 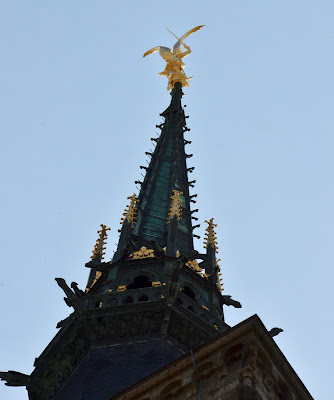 As it often is with spiritual things located in a temporal world, there was much to see and much we could not see as we walked through the cloister, under vaulted ceilings, through arches, across naves, listening to our audio guides and taking photos to be savored later. The structures were feats of architectural genius. The views from the ramparts out onto the bay were spectacular and at the same time the medieval streets of the town were narrow and dark. The Abbey church itself is not ornate but clearly saturated with centuries of prayer. And the one thing that oversees it all is the iconic gold covered 1100 pound 11-foot tall statue of the Archangel Michael, for whom the whole place was named, Mont St-Michel, that stands atop the spire of the Abbey church. The statue is almost impossible to really see in any detail because it stands 550 feet off the ground. I took photo after photo, zooming my lens out to the max, but none of them tells me a thing about the Saint who gazes over every visitor to that holy place, shining like the sun on a blazing hot day.

St. Michael, of course, is one of the three or sometimes four named archangels, and the one who is credited with having fought and won the heavenly battle against Satan. In artwork one usually sees Michael holding a sword. Sometimes the sword is in the air and sometimes it is piercing Satan, who is often depicted as a dragon, which can make it hard to tell if you’re looking at St. Michael or St. George. I finally learned after a short self-guided course in art history that if the guy with the spear is on a horse, he’s St. George, and if he is not on a horse and has wings, it’s St. Michael. 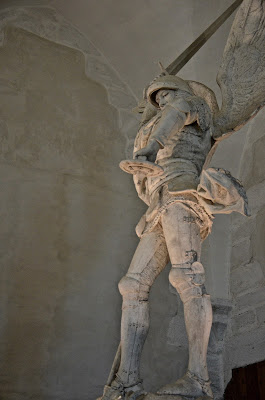 And because Michael’s realm is mostly a heavenly one, he’s usually associated with heights. We almost always see him from below, especially when it comes to statues in churches. And so Michael of Mont Saint-Michel is perfectly placed up there on that spire 550 feet up, seeming to be so much closer to heaven than to earth

In the 8th century, the English born scholar and deacon Alcuin, wrote a text to be chanted in the mass, on behalf of the French King Charlemagne, Alcuin’s boss, who had adopted Michael as his own personal saint and Alcuin as his personal teacher.

The text, called a sequence, includes these lines:

Hear us, Michael, greatest angel, come down a little from thy high seat to bring us the strength of God and the lightening of His mercy.

Today as we celebrate the Feast of St. Michael here at another, perhaps a bit less grand, church named for the Archangel, I make this same petition: Come down a little from your high seat and bring us the strength of God and the lightening of his mercy.

At this point in our St. Michael’s parish’s life, we are facing some challenges. Even as our faith and our bonds remain strong, we have aged and lost vitality. Our financial resources have seen a concurrent decline. Our connections with the community around us have thinned. As someone said to me recently, we had hopes that our children would continue the work we began here but to our sorrow, that has not happened. 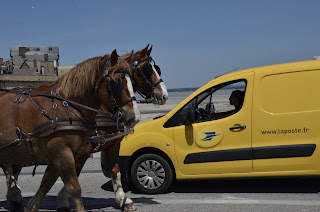 And so it is our work now to reimagine ourselves into a new future that is not based on former hopes but on a calling into new life. As much as we might wish for a new rector to come and fix or save us, it is not the work of a rector to fix, much less save, a parish. Jesus saves. All the neon signs say so.

So asking Michael for the strength and mercy of God seems like a good thing to do today on our feast day. We don’t know yet and for sure what new life might look like but we do know that change is hard and it takes strength to let go of one thing and grasp another. I think of those folks on the trapeze, letting go of one bar and flying through the air for a little bit before grabbing hold of another. It always looks scary.

But this is the task at hand, to let go in order to grasp new life. And God will be with us and will give us strength. We only have to remember our prayers and our scriptures for assurance. One of our post-communion prayers asks God to grant us strength and courage as we are sent into the world to love and to serve. Many of the Psalms name God as our strength as well as our refuge and our defense and through the prophet Isaiah God declares: Do not fear, for I am with you and I will strengthen you and help you. And Paul asserts in more than one letter that it is God who gives him the strength to do what God has called him to do. And so it will be with us.

So let us pray it one more time:
Hear us, Michael, greatest angel,
come down a little from thy high seat
to bring us the strength of God
and the lightening of His mercy.
Amen. 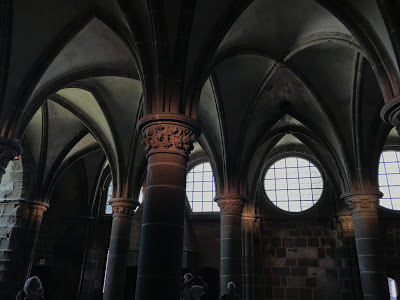