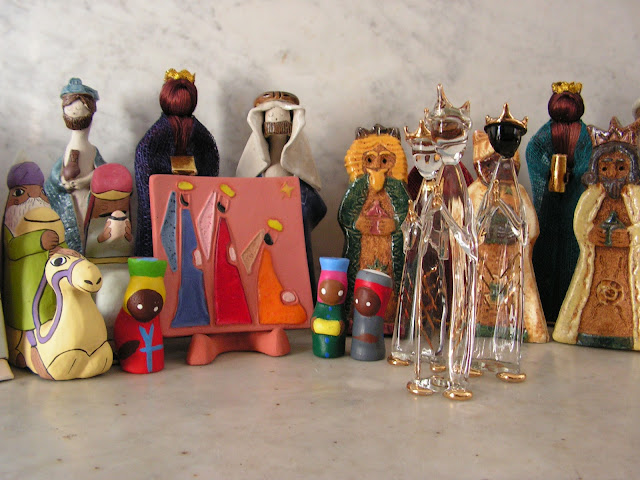 All throughout Advent and Christmas, we have been concerned with the story of the anticipation and fulfillment of prophecy in the coming of the Messiah.

Isaiah has proclaimed insistently that salvation is coming thanks to God’s mighty arm, that justice is coming, and that our salvation will be beautiful, and that it will be like coming home again after being set free from a long and oppressive captivity.

And then came the utter shock that that fulfillment came in the form of a human baby born in a stable surrounded by animals.  The shock that God comes to us as one of us, as one of the least of us, really, in stature and in the class structure.  The shock that God breaks through the heavens and comes to us to live among us, to live with us, to live for us, beginning as a little tiny child with no place to lay his head.

And everyone is …. fearful.

People were afraid to come too near God and too near God’s messengers - conventional wisdom said that if you looked upon God, you would die. You would not be able to withstand being in God’s presence - not because God means to hurt us but because of the vast difference between us. Frail humanity would be annihilated  in the presence of the awesome Almighty God the way ice melts on a hot sidewalk.

But “Fear not, Mary,” says the Angel. “Joseph, don’t be afraid to take Mary as your wife.” Don’t be afraid, shepherds, at the sight of a chorus of winged messengers pouring out from between the clouds above but go and see for yourself what has happened, for to you, for you, the savior has come.  And the wide gap between divine and human has been bridged.

And so the story has been filled with surprise, and the response has been tinged with fear.

Now today come the wise ones, the Magi, astrologers or Zoroastrians or jugglers or kings or fools - whatever they were, they come from far away, bearing treasures.

And they are neither fearful nor surprised.  Rather than being shocked and amazed about the baby, they are expressly looking for a baby!

“Where is this child who has been born?” they ask. Not, “OK, where is the king? Oh, wow, look it’s a baby!”They were looking for a baby. And when they found him, they were not at all surprised about his age or his class or his living arrangements. They were simply overwhelmed with joy and they fell to their knees and opened their treasure boxes. They found what they were looking for and they gave him their treasure.

Maybe this is why we call them wise men.

In contrast King Herod, the Empire’s man in the capital city,  well, he and all of Jerusalem were filled with fear at the Magi’s news.

His response was to be suspicious, jealous, murderous even in his extreme fear brought on by the news of this child. He was attached to his power and his influence - all the stuff that comes with that - and terrified at the prospect of someone taking any of it away from him.

And so his response was to plot murder.

It’s easy to see this contrast and think, well, duh! Be like the Wise Men and not like Herod and all of Jerusalem!

But looking deeper, I suspect most of us are more familiar with fear than we are with joy. We are more acquainted with the feeling of squeezing our hands shut than loosening our grip on our treasure chests.

We know that physical sensation that comes from deep inside when we are afraid of losing what we have.

Joy seems like a luxury, something for children or at least the child-like, like the dancing camel and donkey in our pageant video last week, those who are not burdened with the fears that creep around the edges of our lives, waiting to pounce.

Joy seems imprudent, often, and even inappropriate. How can we play our harps and sing songs of Zion when we are in captivity in Babylon? How can we rejoice when there is so much grief and so much pain and so much death and so much anxiety and so little certainty?

How can we be generous when we don’t know if there’s going to be enough for us?  How can we possibly be joyful when we’ve been in the midst of a pandemic and the world has been on fire and people have filled the streets to cry for justice?

And it makes us unable to experience real joy. The kind of joy that overwhelms, as scary as that prospect might seem, being overwhelmed, which might feel like being out of control and haven’t we had enough of out of control?

But joy is a gift from God and not something to be afraid of. Good tidings of great joy, the angels said. Joy, joy, joy, goes the Christmas hymn.

Joy is also a feeling that comes from deep inside, and it leads not to clenched hands but to opened treasure chests.

Think of the scene in the 1951 movie of Dickens’ A Christmas Carol when Ebenezer Scrooge, masterfully played by Alastair Sim, (although I’ll give you Michael Caine in the Muppet Christmas Carol did this well, too) when Scrooge wakes on Christmas morning to find that he is alive and still has time to send a fat turkey to the Cratchetts, he still has time to give his housekeeper a raise, to reconcile with his nephew, to live out his life in the joy of the knowledge of his salvation.  His whole being changed, his face, his body, his outlook. Everything. He giggles, he dances, he is overwhelmed by joy and he opens his famously tight fists and casts his treasure before a little child.

She says, “If you suddenly and unexpectedly feel joy, don’t hesitate.  Give in to it. There are plenty of lives and whole towns destroyed or about to be. We are not wise, and not very often kind. And much can never be redeemed. Still, life has some possibility left. Perhaps this is its way of fighting back, that sometimes something happens better than all the riches or power in the world. It could be anything, but very likely you notice it in the instant when love begins. Anyway, that’s often the case. Anyway, whatever it is, don’t be afraid of its plenty. Joy is not made to be a crumb.”*

All Saints Friends, it is my joy to be among you this Christmas season and to begin a new year together. I am deeply glad to become part of the All Saints family, despite the realities of living in the midst of a pandemic, and economic uncertainties, a time of frustrations and, yes, of fears.

We will be seeking together.I believe that God has come among us again this year to speak to us and to love us into transformation.

It will be our work to both listen and to act to be God’s love in the world, a world that, despite the salvation that has come through the birth of Jesus, still suffers, and fears, and needs hope. A world that needs us to boldly and joyfully be the church in these times of trouble.

So with joy, hear the words of Ephrem the Syrian, fourth century theologian, as he ponders the magi’s visit and sets out for us our work for this year:

“You, too,” he says to us, “seek the First-born, and if you find Him on high, open your treasures before himand offer him - joyfully offer him, I would add - offer him your deeds.”

Ray Barnes said…
A trulylovely sermon Penny. Something to aspire to for me.
Joy is not something i ever really experience, and if I do, it is so fleeting that it's gone before I recognize it.
A fairly gloomy pessimistic person by nature, I value more than most the ability to be light hearted. (Not frivolous) but find it hard to let go of misery.
You have such a gift with words I can always find a grain of comfort in every post of yours.
A blessed New Year to you and yours
January 5, 2021 at 3:55 AM

Penelopepiscopal said…
Thank you, Ray! I am always very glad to hear from you and glad that you find my sermons helpful. Blessings to you in this New Year, hoping that it will be a happier one for you and for all of us.
January 9, 2021 at 5:13 PM