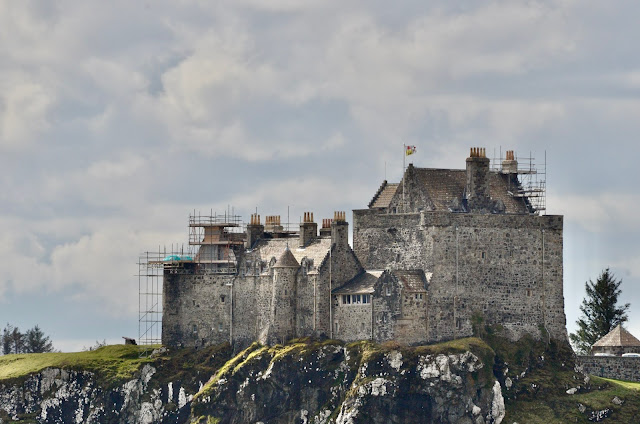 I guess there is a way to talk about today’s Gospel that features a grisly beheading as the last course at a birthday party without bringing politics or the social world of power imbalance and influence into it, but I’m not sure that such a sermon would be very spiritual either. So here we go.

Most of us would probably prefer to chalk up the characters in Mark’s Gospel story today as stock caricatures: the weak and hapless ruler, his scheming wife and twisted daughter, a powerless prisoner, nameless and faceless guards, and shallow guests. Then we can then simply hold ourselves aloof, voyeurs, observers of evil that we ourselves would never get mixed up in. We can get out our popcorn and soda and watch with fascination as if this were just another episode of Game of Thrones.

And by doing so we can avoid pondering what this Bible story means to us as both followers of Jesus and citizens of a broken world - a world that our God deeply loves and desires to redeem. We are people who have promised at our baptisms to strive for justice and to respect the dignity of every human being, who are at the same time embedded in a society that often does not embody those values. I can understand wanting to avoid that pondering. Nobody wants to be part of this story.

It seems to me, though, that while our technology has improved in the last two centuries, the systems in which we are embedded are still tangled up with brutality, imbalances in and abuses of power. We may have found ways to dress them up in more modern clothes but even the scenic and not very bloody British murder mysteries I love to watch on TV are at their core about our own murderous hearts. We accept with little question the impulse to gain and retain power, even when it means wielding that power in ways that denigrate and destroy people, resources, and our earth. We may not do it ourselves personally, but we participate in brutality and power mongering just because we are part of human society.

For instance, my great-great grandfather was a man who came to this country from Ireland seeking his fortune. Over the years he accumulated a thousand acres of land along a river in Georgia on which he grew crops - cotton of course, as well as food crops. In order to farm that land, he bought people to work it. He owned those people, and occasionally he sold them if they were no longer needed or had become trouble makers. When I learned about him, the family talked about how neat it was to have an ancestor who had become wealthy and powerful in his community. We accepted that owning slaves was just what powerful wealthy men did in those days, because they needed slaves to make their plantations work, and the products of those plantations were used to make the world go around.

And there’s the trap right there. We accept that brutality is a necessary part of making the world go around. We accept that some will use their power to keep others down, that’s just the way it is for us to have the things we need and want. If it turns up in the form of a head on a platter at a birthday party, well, we didn’t wield the sword ourselves did we? So we are not to blame!

I don’t want to suggest that this circularly named Herod clan was just a bunch of innocents ensnared by cosmic evil. They are monsters, all three of them. They are actively engaged in promoting a system from which they benefit. I would like for Herod, who was intrigued by the righteous John, to have done the right thing and backed away from his rash offer. I would like for him to suffer remorse. I would like for him not to send his men out to imprison people but rather send them out to give life to the community the way Jesus did in last week’s story sending his disciples out to heal and cure.

But he didn’t. He didn’t seem to see another way.

What we see here is that in God’s kingdom, there is another way. People are sent out to minister to others. But in kingdoms run by humans motivated by power and greed, they are sent out to trap, own, and imprison others and use them to prop up their power.

We as human Christians live in both those kingdoms. And it’s important that we know the difference between them. Those in power in this world would like to trap us, to own us, to imprison us into buying into and supporting the systems that keep them in power and on top. And those systems are so complex that we don’t even know we are entangled in them sometimes. We enjoy saving money by buying things that are not ethically produced; we rejoice when our stock market portfolio soars without wondering at what price to our earth or our resources or other people are our monetary gains. Is it up to us to undo harms done by others?

Well, I know cannot undo harm already done, but I can work to mitigate it. I would say that my vow to strive for justice and to respect the dignity of every human being means I have to recognize injustice and indignity past and present, and to work against the continuation of injustice and indignity present and future. And I will also say that when I’m not simply blind and deaf about those things, I struggle to remember that there can be another way instead of accepting and defending how things “just are.” I admit that I’d prefer the nagging voice that calls me out or renders judgment about my own life just stay down in the dungeon, or even better, be silenced.

And that’s where we get back to Jesus. While John was being sought out, imprisoned, and finally killed because he spoke the truth to a petty despot, Jesus was sending out his disciples to heal and restore the people they found along the way, to bring life in a world full of death. That’s what I need to see again today.

This story is not about coming to church, or living piously withdrawn from the grittiness of society, and untethered from many systems and structures - economic systems, political systems, class structures, power structures. It’s about recognizing the traps, seeing the monsters, understanding what power does and how brutality is still pervasive in our world, and maybe deciding that when Herod invites us to a party, we decide to hit the road with Jesus instead.