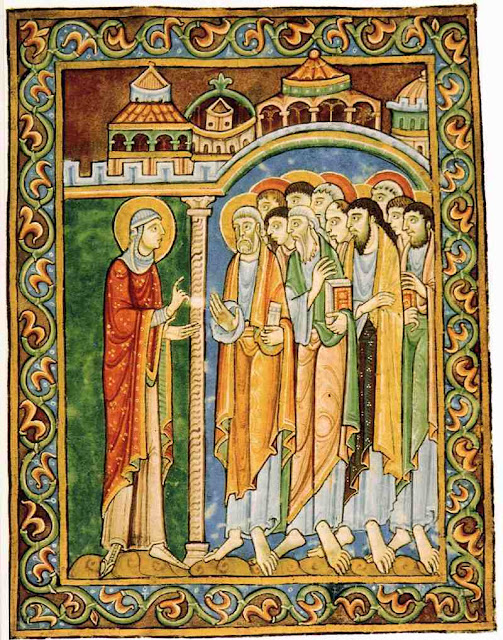 Collect and texts for the Feast of St. Mary Magdalene

Today is the feast day of St. Mary Magdalene.

We all know the story of Mary Magdalene, of how she stood at the foot of the cross as Jesus died and then came back to find the tomb empty in all four Gospels, of how she conversed with an angel (or some angels) and how the disciples didn't believe her story, how she was the first to see and talk with the risen Lord. We read the encounter between Jesus and Mary from John's Gospel today and also on Easter.

There are other stories of Mary Magdalene, too. She is generally described in all the Gospels as one of the women who followed Jesus and provided for him and his ministry, a patron if you will. She is specifically described in Luke and Mark (in the extended ending) as a woman from whom seven devils had gone out, presumably having been exorcised by Jesus. There are no verses that suggest she was some kind of notorious sinner. Her unique place in the story is that she was the most faithful of his followers.

Unfortunately, some of the early Church fathers, however, took a very different approach to Mary Magdalene, conflating her with any woman in the Bible who was called a "sinner." Those early Church fathers also seemed to consider sexual sins as the only sins that were (could be?) committed by women. Apparently they did not imagine that women could be thieves or murderers, even. Just wanton and lust-inciting. Before long, Mary Magdalene was widely accepted to have been a prostitute, sort of the opposite of Mary the Mother of Jesus, the Virgin. Much of the art depicting her shows her with long flowing red hair, unbound, sometimes dressed in suggestive clothing, while Mary the Mother covers her hair and looks chaste.

So, anyway, to repeat, two of the Gospel stories tell us that Mary Magdalene was cured of some kind of serious demonic possession, one names her as a patron who with other women underwrote the ministry of Jesus by "providing from her means,"  and all of the Gospels tell us that she not only followed him generally but that she was there at the bitter end, after the male disciples had deserted Jesus, standing at the foot of the cross. And they all tell us that after his death, she could not stay away but returned to the tomb. She did not expect to see anything but a dead body, of course. Hers was not a story of hope (nor is hope the story of any of the disciples) but of faithful devotion.

That devotion must have been in response to having been healed by Jesus. If she had seven devils, whatever that even means, she must have been incredibly, mightily afflicted.  And so her healing must have been a mighty experience. And her response is the kind of devotion that kept her with him throughout the unimaginable horror of his excruciating death and hurried burial. She accompanied him faithfully throughout his ordeal and beyond (while the male disciples deserted him and fled). Her love and devotion to him was as strong as death, to be sure.

And this is what I like about the story of Mary Magdalene. Jesus made her whole, bringing her back from the grip of something that had taken over her life, and her response was to stay with him no matter what. She shows us resolve and strength and power that is all borne of gratitude. Mary Magdalene shows us what the strongest kind of bond that a human can have with another person looks like. And that bond is not shown as spectacular or bombastic but simply unswerving. Love is as strong as death for us humans.

But for God, love is stronger than death. As much devotion as Mary Magdalene shows Jesus, Jesus shows us all even more and stronger love and gives us reason for a hope that none of the disciples, nor Mary his mother, nor Mary Magdalene knew.

Mary Magdalene's last scene is her announcement to the disciples: I have seen the Lord. He is risen! She was the only one to see him in the Gospel of John in that liminal state before he ascended to the Father (which is different from Matthew and Luke/Acts, in which Jesus ascends after 40 days after some post-resurrection appearances). The artwork above shows her telling the disciples of her experience, in her role as the "apostle to the apostles.

In the story of Mary Magdalene lies our own hope of salvation, born of unswerving love by God. Even if we have not needed to be cured of some mysterious affliction, we all have need of salvation because we and our world are broken. And because of love, that salvation is ours. May we, like Mary Magdalene, respond with faithful and unswerving devotion, too.