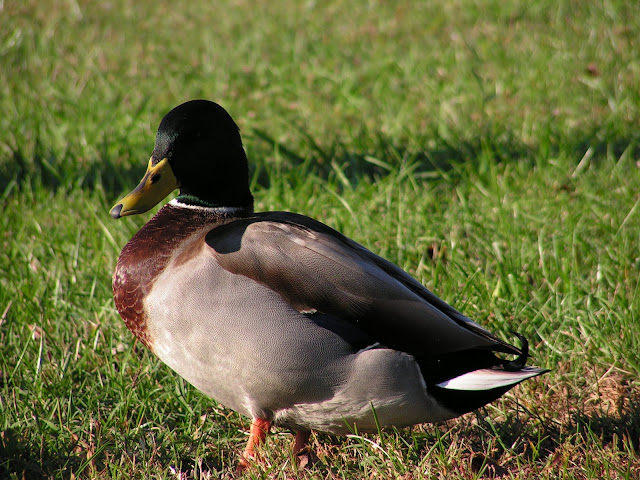 When I moved into my new abode here in Williamsburg, I discovered that we have a "duck pond" behind the clubhouse.  It features a large fountain in the middle and a paved walkway around it.  And, of course, ducks.  A flock of mallards, who were always very curious about anyone who walked around the path. They seemed to be looking for a treat, but they weren't at all aggressive about it.  When one came down the path, the ducks all headed in one's direction and would gather around if one stopped; then, if no treats appeared, they ambled back to the water and that was that.

After my time away at the end of October, I came back to find the duck pond empty of ducks, save one.  I walked around the pond a few laps and watched the lone male mallard coasting in the pond. He didn't approach me, even when I stopped.

A neighbor came along and I asked her what had happened to the ducks?  "Oh," she replied, "they've flown south for the winter."

Of course.  I used to live in one of the places some fowl call "south."  We tended to have many of our birds year-round in Georgia.


"What about that one?" I asked, indicating the single male.  "Why didn't he go with the rest of the flock?"

"Well," she said, "I think he's the one who stayed behind last year also.  His mate was unable to fly. She'd been injured and couldn't fly, and last year the two of them wintered here together.  But she died this year.  So I'm guessing this is the widower, so to speak."

"So he's just going to stay here all winter by himself?" I asked.

"I guess so.  It's sad, isn't it?" she sighed.  "Although I think it was one of the males who injured the female to begin with.  They can be cruel to each other.  But it makes me sad to see him swimming around all alone here now."

I agreed.  It was sad.  It is sad.  And then she (and her two dogs) went on.  I continued around the pond for a few more laps, watching the duck and feeling terribly sad myself about the lonely duck. 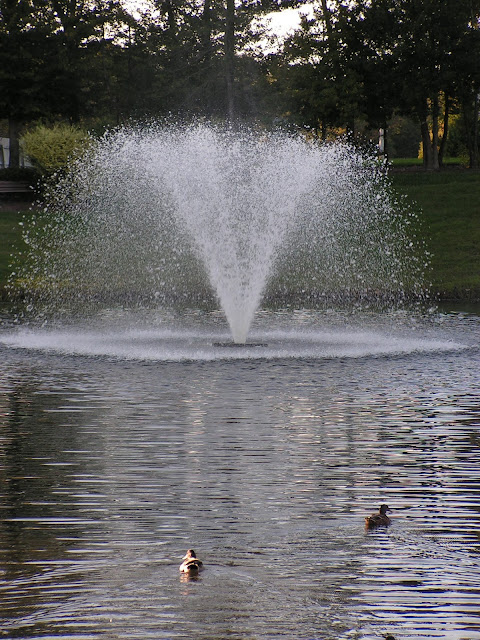 Yesterday, I went for a walk around the pond, and there were three ducks.  The single male, and a male-female pair were swimming and grazing and dipping their bills into the water.  Clearly the pair were a pair - they swam closer together, almost in concert - and even if the male were a third wheel, so to speak, they were all three in company.  I breathed a sigh of relief.

I don't know where the pair came from, whether they were of the original flock or if they just wandered in from some other pond, but I was glad to see them.  Three ducks for the winter just seems infinitely better than one.

Of course, it's entirely possible that the pair will fly away, too.  We'll see.  But I hope they will stay.  We were made for relationship and to be in community, even if we are odd ducks.

Ray Barnes said…
Speaking as an "odd duck", I can confirm that three is infinitely better than one.
Good luck with the trio.
You do realise it could all go pear-shaped?
Or should that be duck shaped?
November 13, 2011 at 5:13 PM

Perpetua said…
Such a sweet little story, Penny and lovely photos. Fingers crossed the odd trio stay together for the winter.
November 13, 2011 at 6:10 PM

Penelopepiscopal said…
Thanks, Ray and Perpetua. I do hope they stay together for the winter - or they convince the single male to go with them. I will be horribly sad if he ends up here alone. (Ray, I'll have a duck-shaped hole in my heart, or something like that. :-))
November 13, 2011 at 8:41 PM