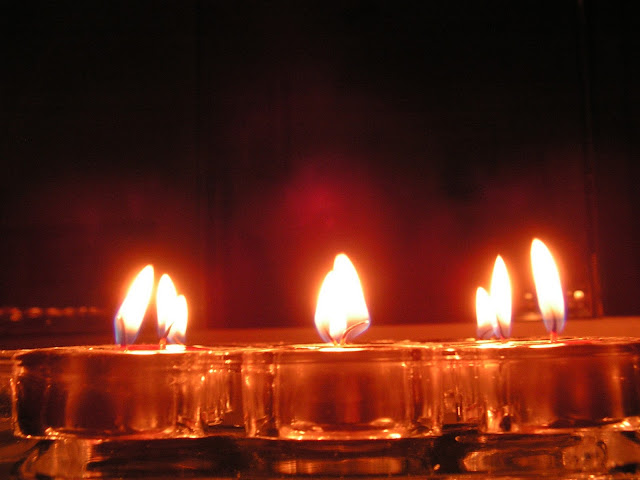 Many of us tend to associate fire with something negative.  If one were to ask a random sample of people about putting "fire" and "God," in the same sentence, I'm guessing that more often than not, the association would be about destruction.   Like, the fires of Hell, the unquenchable lake of fire, or the destruction of Sodom, or unworthy trees being chopped down (no doubt by John the Baptiser himself) and thrown into the fire, or chaff separated from the wheat and thrown into the fire.

Moses encounters God in the burning bush - a phenomenon that causes Moses to turn aside from his hike to marvel at the sight of a flaming shrub that isn't being destroyed.

God hangs out with and leads the Israelites out of Egypt as a pillar of fire.  It isn't a fire that is consuming anything but one that gives light and direction to the people as they head out into the unknown.

Sacrifices on the altar are given to God through fire.  Sometimes the priests (who are supposed to keep the fire burning on the altar at all times) initiate the sacrifice, and other times God sends down the fire to accept the offering (see Judges 6:21, when Gideon is instructed to make a sacrifice and fire comes up out of the rock to consume, and therefore accept, the sacrifice).

Much of the fire that happens in the Bible is in fact the fire of purification.  Even things that are underperforming and thrown into the fire may not be destined for destruction, but for purification.  To burn off the dross.  Why else does John the Baptizer say (in Matthew and Luke) that while he baptizes with water, the one who will come after him, the Son of God, will "baptize with the Holy Spirit and fire?"

The fire burns away what is not necessary, the things that are hindrances and blemishes and weaknesses, leaving behind the essence of what God created in the first place.  So perhaps we need not immediately assume that a baptism by fire is a negative thing.  It may well be the spark that lights our own holy fire.