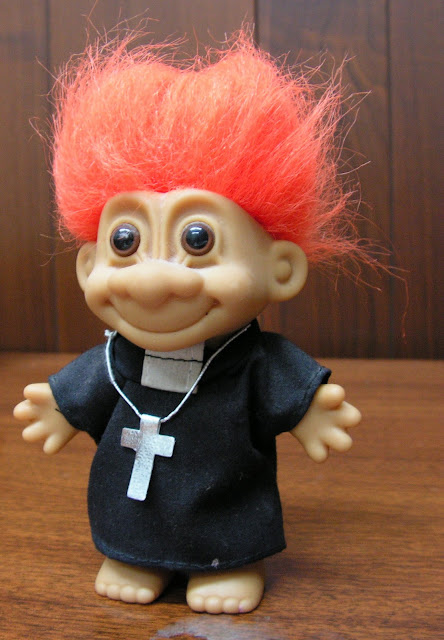 I continue to think this week about prophets.  During seminary, no small number of classmates wanted to style themselves as prophets.  Prophets were the ones to speak truth to power, to stand on the outside and thus avoid the temptation to be a "company man."  Being a company man or woman was never something to which to aspire publicly.  Being a prophet was seen as being true to the Gospel.

Of course, without "companies" and "company people," there would be no need for prophets.  And without prophets, institutions would be subject to nothing but temptation to sell out and lose their souls.  The truth is that we're all in this together.  Companies and institutions can governments can do great good, and they can also end up focusing on holding on to their power.  The prophetic voice and the prophetic action is absolutely necessary for an organization's health and vitality.  Change simply may not happen without some prophet's squawking.  Sometimes one person's voice can truly change the world.

And yet, there is a place for organizations, who can deliver goods, information, hands and feet to  deliver great good to many people  I would argue there's still a place for church buildings - a need for sacred space - as well.

A few years ago, James Taylor was one of the speakers at Williams College's commencement.  He did a great job showing how complicated this deal is.  He made a name for himself being something of a prophet, and then got famous, and maybe didn't like it and maybe did like it, and wrote some songs about not being a company man which made him richer and more famous.  (Watch the video on YouTube here.)  There was an issue for him about identity and also about the reality of his life and work.

And so I wonder if rather than styling oneself as a prophet, one might always be open to being a prophetic voice from wherever one finds oneself and in whatever situation.  After all, the Spirit blows where it will. The important thing for us to to keep ourselves open to that Spirit.

Kathryn de Belle said…
I love sacred spaces, but struggle with the human aspect, church wardens, PCCs, and any other opportunities for the power-crazed. Although I can see you can't have one without the other, it all seems so wrong to me.
December 8, 2011 at 3:34 PM

Penelopepiscopal said…
All the more reason why we need a savior. Although I will say that I have had experience with humans who are not power crazed, even at church. :-)
December 9, 2011 at 10:01 PM

Anonymous said…
I don't need "saving", since I've never been lost. You want to pretend that there's an invisible man in the sky, that's your problem. Don't bother the rest of us with your fairy tales.
January 5, 2012 at 12:23 PM