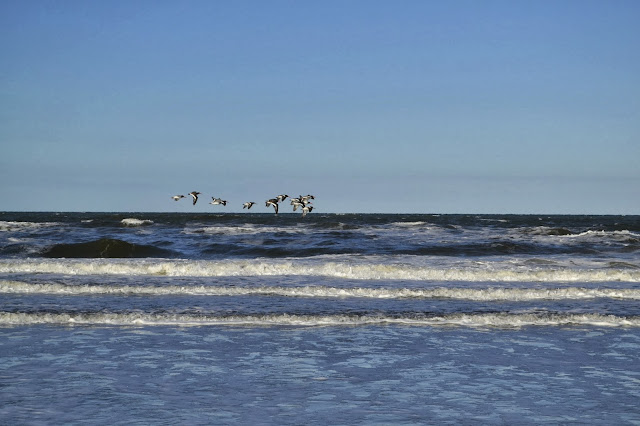 This is a flock of American oystercatchers (click the photo to enlarge - it's not a great picture but you'll get the idea) flying in the Back Bay National Wildlife Refuge in Virginia Beach, Virginia.

Oystercatchers are easily identified by their large, straight, red bills which they use to ferret their food out of the sand and tidal muck: oysters, of course, and other mollusks plus crabs and marine worms.

The Back Bay National Wildlife Refuge is, of course, now closed because of the government shutdown that began last night at midnight. Only emergency (mostly law enforcement) personnel are working in the refuge. The purpose of the refuge is to provide habitat for migratory birds along the Atlantic Flyway. Back Bay is the winter home for tundra swans, snow geese, loons, and gannets among other species. Although there are contingency plans out there on the web
(http://www.doi.gov/shutdown/fy2014/upload/FWS-Fact-Sheet.pdf) those plans suggest that the only work that will be done is stuff like protecting property and equipment or putting out a fire. Nothing is said about managing the property for the benefit of the animals living in the refuge. Back Bay is normally flooded in the fall in order to provide resting ponds for the overwintering birds. It appears that that water management work will not happen until the shutdown is over.

And of course, the employees are furloughed, which is a fancy way of saying that they are laid off until the shutdown is over.

And don't even get me started about the shut down of the WIC program (full name: Special Supplemental Nutritional Program for Women, Infants, and Children). This program provides nutritional support and vouchers for about 9 million poor women and their children). Here's the story: http://wtvr.com/2013/10/01/wic-government-shutdown-impact/.

All of this makes me angry and sad. Lord have mercy upon us.

Anonymous said…
Both sides need to compromise. Have they forgotten the meaning of that word?
October 1, 2013 at 2:27 PM

Perpetua said…
Super photos, penny, but I have to admit to being completely bewildered by what is happening in the US. I do hope a way through can be found very quickly.
October 1, 2013 at 3:47 PM

Penelopepiscopal said…
Thanks for taking the time to comment. I don't think, however, that this is a simple issue of not understanding compromise. The time for coming to the table to work out differences is as a bill is crafted and debated before being voted upon. Once it has been passed by Congress, signed into law by the President, and has been upheld by the Supreme Court, then it is the law. Compromise doesn't happen after a law is passed; it happens before the vote if it happens at all. I agree, though, that there has been very little evidence of a desire to compromise as a way of doing business these last few years and I, too, lament that very much.

Penelopepiscopal said…
Thanks, Perpetua. It is bewildering and I too hope that we can move beyond this very soon. Many people are out of work now and this shut down is costing a lot of money, which is ironic. People of good will can certainly disagree about what they feel that the government ought to pay for and what ought to be paid for by the private sector, but this is not the way to resolve those differences.
October 1, 2013 at 6:17 PM