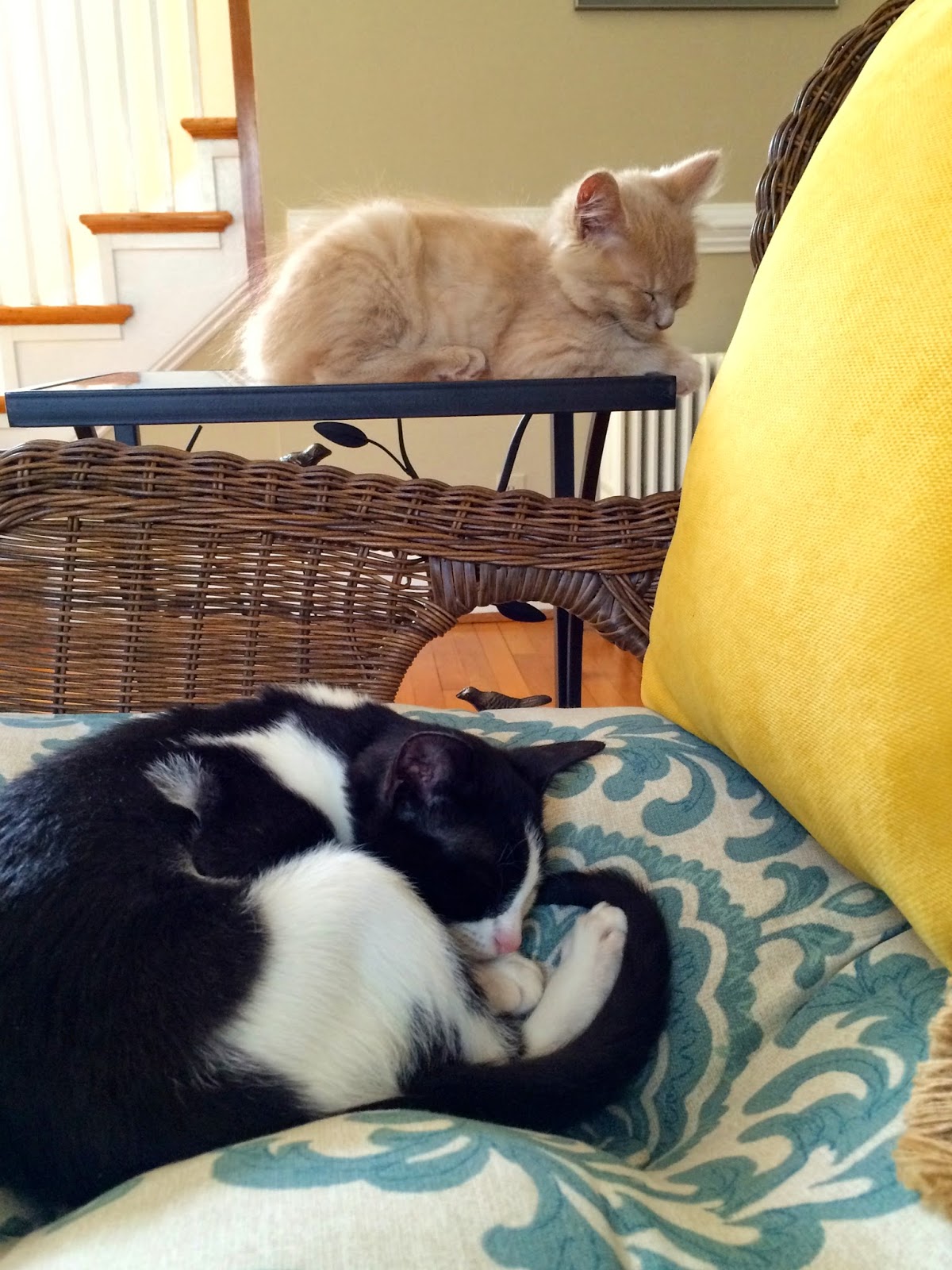 These are my new kitties - Sally (b&w) and Bella (buff)! It's been hard to get a photo of them because they are a whirlwind of activity much of the time. Here they are finally zoning out after a half hour of serious play time. They're not litter mates but are the same age - about 2 and a half months old. Sally is a little shy and reserved and Bella is just all over the place.

Sally was a street kitty, found alone, and needs to feel safe and secure. Bella came to the shelter with two brothers and is used to rolling around with other cats. With the help of a counselor at the shelter, we started with Sally and tried to match her up with several other cats to see if she was interested. (I wanted two so that they could be buddies, especially on those days when I work long hours.)

Sally wasn't much interested in any other cats until Bella came in. Then she perked up, got out of her bed, and came to investigate. Within five minutes, they were "parallel playing" and within fifteen, they were reaching out to each other through slats in a bench.

In two days, they have become like litter mates. Playing, sleeping, rolling around play-fighting, ambushing one another, etc. Sally is still liable to find a sheltered or soft spot to lie down and Bella is liable to try to climb the chimney, but I think they are going to make a good pair.

We were so saddened by the loss of our Miss Kitty earlier this year, and I had a little trepidation about  getting another pet, but these two are just adorable and hilarious, and I'm glad I am able to give them a good home. You can expect to see more posts about them, if I can ever get them to slow down. 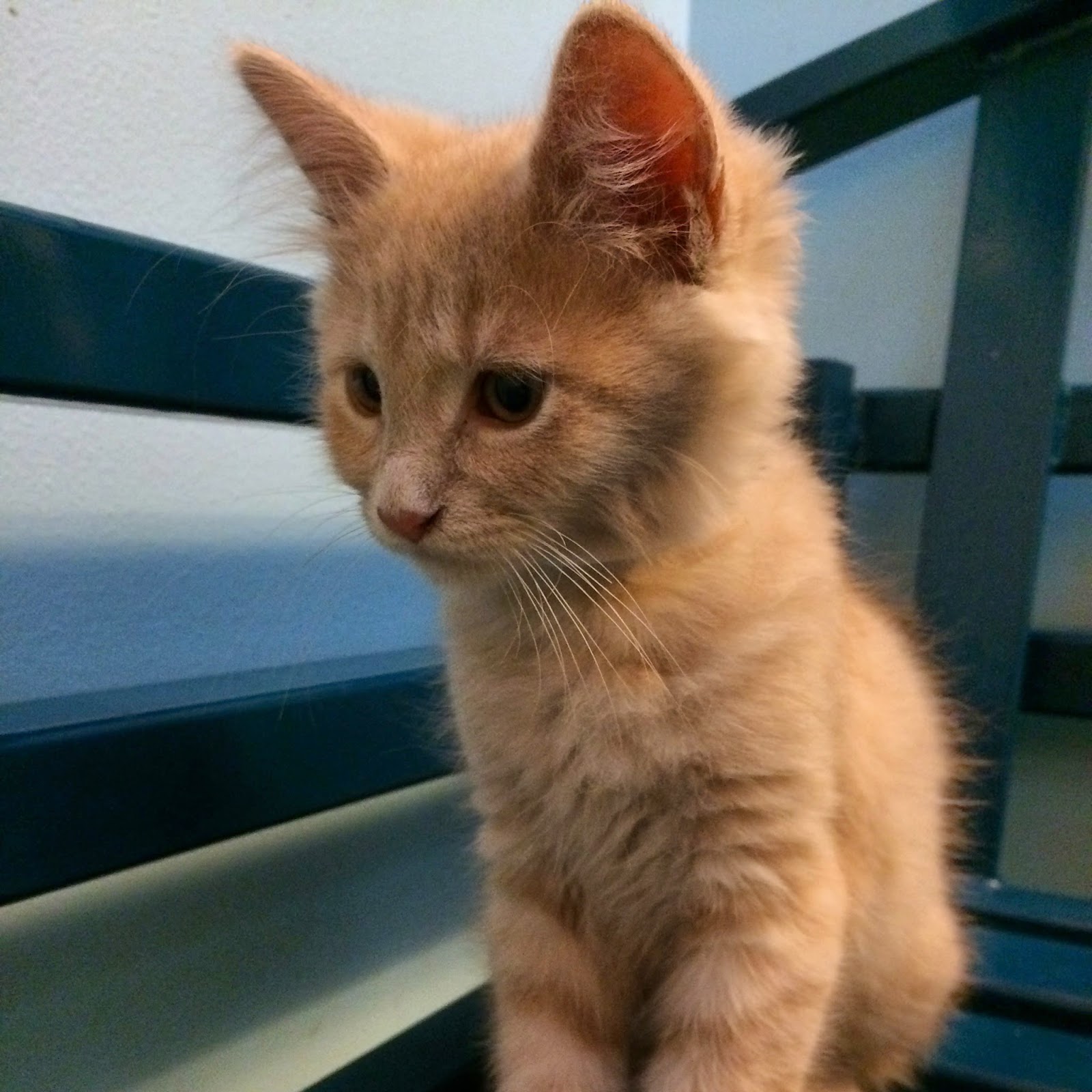 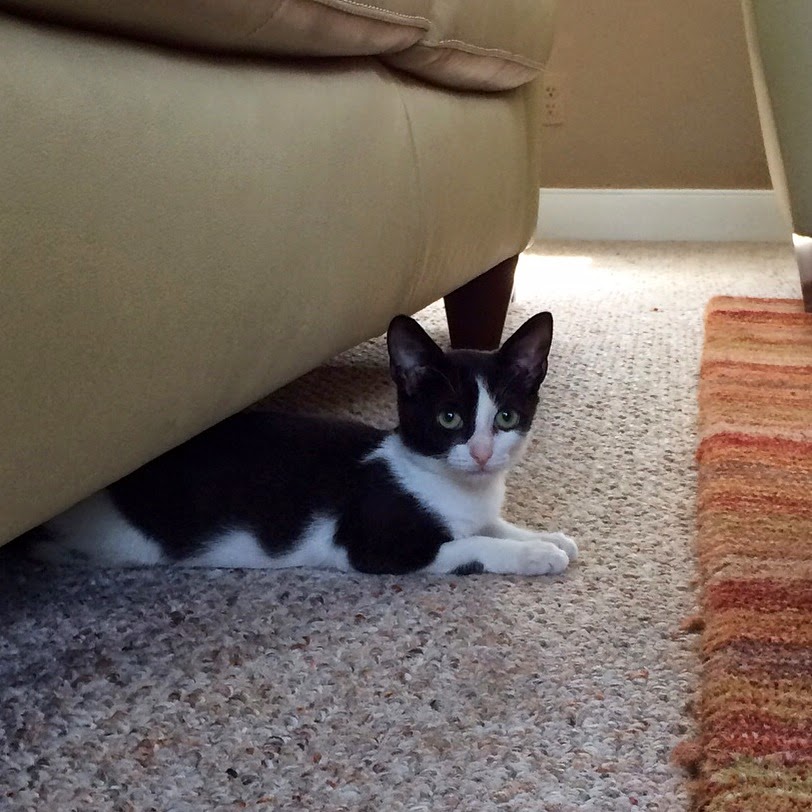 Penelopepiscopal said…
Thank you, Perpetua! When I look back, I realize it's been nearly 30 years since I've had a kitten! We had two who lived to be 19 and 20 and then Miss Kitty came to us as an adult. I'm having to kitten proof any room they are in unsupervised, which means for now they are in the kitchen when I'm not at home. By next week, I hope to have them a play structure and a way to block off the fireplace so they can roam more freely.
September 15, 2014 at 3:28 PM

Ray Barnes said…
What a lovely little pair, but, unlike Perpetua I don't envy you. Kittens are so beautiful but such hard work.
All four of my past cats have been rescued adults so most of their 'terrible teens' behaviour was behind them.
Your plans to redesign their living space sound perfect. I wish you joy of them.
September 15, 2014 at 5:26 PM

Penelopepiscopal said…
Yes, they do require some work, Ray! We have had adult cats for a long, long time and I forgot the energy and potential for getting in trouble you get with a pair of kittens. But they are adorable. And so for nothing has gotten broken! Thanks for your good wishes, Ray.
September 17, 2014 at 11:15 AM