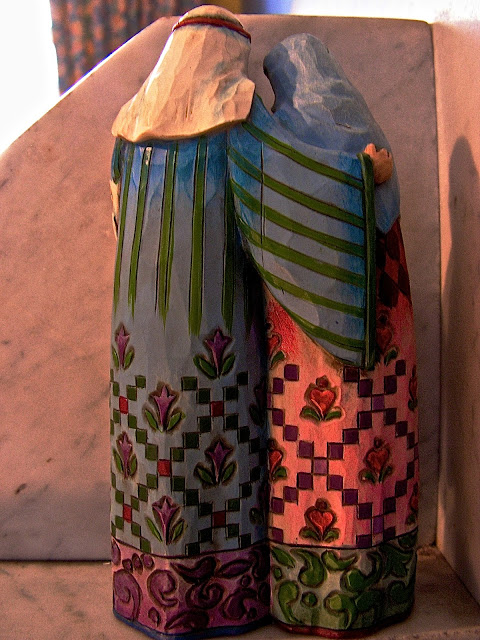 Today we enter the season of Advent, four weeks of holy waiting for God to come to us again. We are called to sit in the place of anticipation, to be alive to the present moment of the season of not yet. But I have to confess: waiting makes me crazy.

And more serious waiting - to see how things are going to turn out - for an acceptance letter or test result, to see how someone is going to recover from trauma or how the country is going to fare under a new administration - can be excruciating.

I want to be present to the present, but when I am really anxious, my instinct is to withdraw and agonize alone.

A few days ago, I came across a newspaper story about Sherman the Donkey. Sherman had been kept pent up in a small mucky stall without much care and was in danger of dying when a Lancaster County, Pennsylvania, man took him in with the idea of rehabbing Sherman into a running partner. (Apparently, running with donkeys is a thing.)

When Sherman arrived, however, he could hardly even walk. His hooves had grown so long that they resembled elf shoes. He had parasites and rotten teeth and matted fur. According to the vet, he was 8, but he seemed to be 80.

Sherman’s anxious new owners called around for help from neighbors who knew more about animals than they, who are Philadelphia folks only a couple of years into their new rural life. Someone came with a hacksaw to trim Sherman’s hooves. Another came to pull rotten teeth and another to bathe him and cut or curry out the matted fur and parasites. Still another attended to raw skin and bloated belly.

His bodily needs taken care of, it was time to wait and see if Sherman would respond. He needed to walk and to eat if he was going to even live, so his owner put all the other animals out to pasture, leaving Sherman alone, hoping he would want to explore his new home. But instead, all Sherman did on his first day was stand still beside the barn, head hanging, as if, the writer said, he was waiting for execution. He needed something else.

That something else turned out to be a goofy goat named Lawrence, himself a rescue with ears malformed from frostbite, who came in with the sheep from the pasture at the end of that anxious first day and immediately noticed poor, sad Sherman. Lawrence went right to the donkey, sniffed him all over, and then lay down at his feet. He stayed there all night.

By the end of the following day, Sherman was walking and then eating with his new friend. Before long he was even running. He was going to live - and more than that, he was going to thrive in his new community.

Of course, I got to find out that Sherman was going to be ok in a matter of minutes, but the lesson from this story could not be more clear to me: waiting is best done with a friend.

I have always tried to do all my serious waiting alone, fighting my twitchy anxiety under the cover of darkness. I have not wanted to be accompanied in my darkness, choosing instead to withdraw or to be reactive in such a way that keeps others at a distance. I have not wanted to need someone to really sit with me in hope. But that is exactly what I do need.

Someone to just sit with me in hope.

At the end of all our waiting, God says, comes new life. This is the Advent story. And it can be my story, too, if I will but believe. Whatever my worry, even dread, I do not need to live in that place alone.