A vision of beauty, danger, and hope 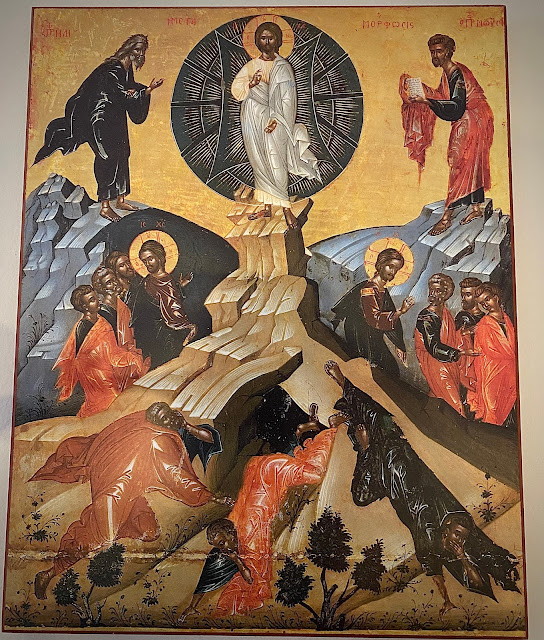 On Friday morning, I woke up to a world that had been changed over night. It had been transfigured - transformed into something more beautiful, a landscape changed from brown and deep green to dazzling white. The branches of the fir trees bent gently down under the weight of glistening white crowns. The snow piled up prettily on lampposts, yard art, and car roofs. Even the magnolias, our signature southern tree, wore fresh white coats. I had work to do - a sermon to write - but I decided that first, I needed to go out and walk in this transfigured landscape before it melted away.

As I picked my way down neighborhood streets, I saw the same houses, the same shrubbery and lawns and trees and fences that I see almost every day on my regular walks. But it was all so beautiful, everything clothed in soft white, and in the quiet cold my boots made that crunching sound you only hear on snowy walks, which was amplified by the stillness in the frigid air.

I was struck not only how beautiful it was but how fleeting it would be. 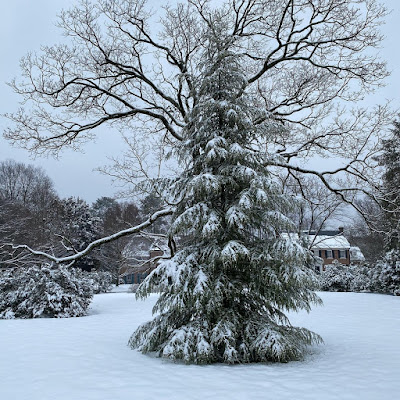 A few streets over, a UPS truck was stopped in the middle of the road, hazard lights flashing, and I watched a gloved and earmuffed man carry a large package from his vehicle up an un-shoveled driveway and deposit it on the front porch where he rang the doorbell and then turned and headed back to the truck.

I waved and he waved and we said “good morning, be safe out there" to each other and I felt a little guilty relief that I did not have any packages coming on this day that someone would be compelled to deliver to me. Because I often do.

I further thought to myself that while I am walking my unplowed, icy neighborhood streets glorying in the dazzling view, the UPS driver, among many others, might not be seeing what I was seeing. He might be distracted by the need to watch the road and perhaps he would be gripping the steering wheel the way you do when you’re nervous and hoping that people like me, not to mention frolicking children or snow-crazed dogs, would stay out of his path in case of a skid. He was hazarding getting stuck or slipping down someone’s front porch steps to do his work for the day, and maybe just gazing around at the dazzling glory of the snowy day was a luxury he felt he couldn’t afford. I almost missed it myself.

The dazzling transfigured Jesus that the three disciples saw on the mountain was a vision shown only to them. But the dazzle came from within Jesus, not as a reflection from outside as it is with the snow. What the disciples saw was not natural beauty. It was divine beauty, shimmering mysteriously like the burning bush that Moses turned aside to see, or the pillar of smoke and fire that stood between the Israelites and the Egyptians, between the way to freedom and the forces of death.

It shone from Jesus as the light shone from Moses as he came down the mountain after his encounter with God. Not just reflected glory, but glory itself. The glory of God in the face of Jesus, as St. Paul says. 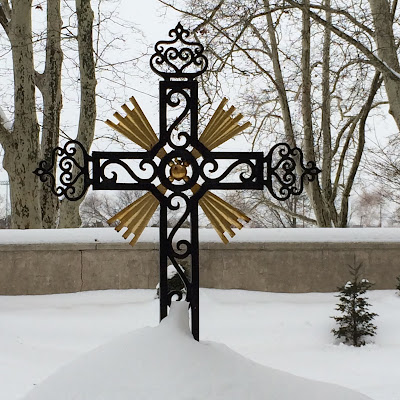 The story goes on to say that the disciples who witnessed Jesus in his glory were confused and anxiously frightened by it. They did not know how to respond to it. And even after they had heard the voice of God confirm to them what God had confirmed to Jesus at his baptism, that he was the beloved son, and heard God add specifically for their benefit that they must listen to Jesus (perhaps because they had argued with him and refuted his words just the week before), in the end Jesus told them not to tell anyone what they had seen. At least not yet. Not until after the resurrection. Not until it was needed, not until the time was right.

And so the rest of the world is going about its business, heads down, eyes to the ground, carrying the usual daily loads, watching our steps, and these three are witnessing, just for a moment, the divine; and then it’s gone and they go back to regular life.

But I want to think that the vision of Jesus in his glory gave them hope. That that vision together with God’s words gave them something to hold on to as they moved closer and closer to that predicted rejection and predicted suffering and predicted, inevitable death.

In the end, of course, they did tell. They did tell what they had seen and what they had heard. They did relate the stories of when they glimpsed dazzling, divine light. And they did so to give hope to those who were still in thrall to the worldly forces that were crushing them. When these stories finally were written down the people who heard them were desperate for some hope, desperate to hear that somewhere someone had seen the divine light illuminating them with its otherworldly brightness, that someone had been able to just be there surrounded by it, to recognize the awesome beauty of it even amid the things that surpassed their understanding.

And then, when the time was right, to tell about it.

And so I also hope that the delivery man was able to see the glory in the day as well. I hope he saw the rabbit tracks on the sidewalk as he made a delivery, that he saw a red cardinal perched on an ice-ringed birdbath, that he was struck by the way the snow sits on the naked crape myrtle branches and makes their tangled gnarled fingerlike tops stand out against even the cloudy sky. 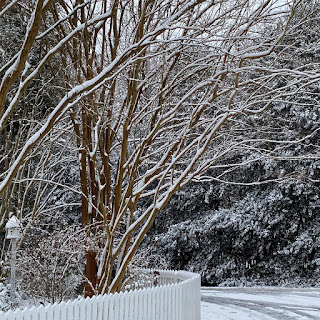 I hope that he was dazzled by beauty even as he trudged up slippery steps and drove through slushy streets and bore the cold alert for danger, and I hope that later, when his family or friends needed a word of hope, when the time was right, he told them about it.