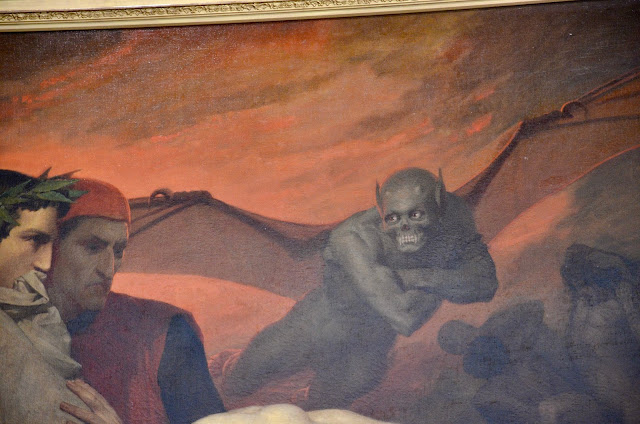 Strengthen us, O Lord, by your grace, that in your might we may overcome all spiritual enemies, and with pure hearts serve you; through Jesus Christ our Lord, who lives and reigns with you and the Holy Spirit, one God, for ever and ever. Amen.

Once again we are asking for strength through God's grace and hope for pure hearts. And while the devil is not specifically named here, spiritual enemies are the adversary of the day.
So what are spiritual enemies?
We modern folk do not perceive the world as being full of spiritual beings, but many do believe in angels. Remember that very popular TV show, Touched by an Angel? And then there's the angel who helps George Bailey come back into his senses in the timeless movie It's a Wonderful Life. One of my favorite movies is Wim Wenders' masterpiece (IMO) Wings of Desire, which shows us a world (specifically Berlin) full of angels who hover around people listening to their thoughts and troubles. People tell stories about that time a guardian angel seemed to intervene in their lives, keeping them from an accident or walking with them in a scary time. I have such a story myself, but that's a story for another day.
Certainly in earlier (pre-Enlightenment) times, the sense that there were also evil spirits among us was part of every day life. Evil spirits caused illnesses (perhaps the plague, for instance, or simply individual diseases) and worked to turn people away from God into bondage to Satan. These ideas are now considered by most to be old fashioned, ignorant of science, and all that.
I wonder thought if it might be helpful to talk about evil spirits in terms of the deadly sins? (We don't much like to talk about sin, either, but again, for another day ....) I feel that the traditional sins like avarice/greed/envy are more than bad habits but forces that work on us and call forth our not-better natures. And none more potent than accedia (sloth), or the noon-day demon. That demon was blamed for making the monks sleepy and listless mid-day, causing them to ignore their duties and their prayers and generally to be very blah.
While accedia is sometimes characterized as laziness or boredom, there's more to it than that. In modern times, the term has been re-purposed as a way to talk about depression. And while I certainly don't think that depression is caused by evil spirits I do think that there are forces at work in the world that affect us in ways that dampen our own spirits.
So what dampens your spirit? Can you ask God to give you strength to resist what dampens your spirit? That seems like a good prayer for today.
Email Post
Labels: BCP Prayers Lent