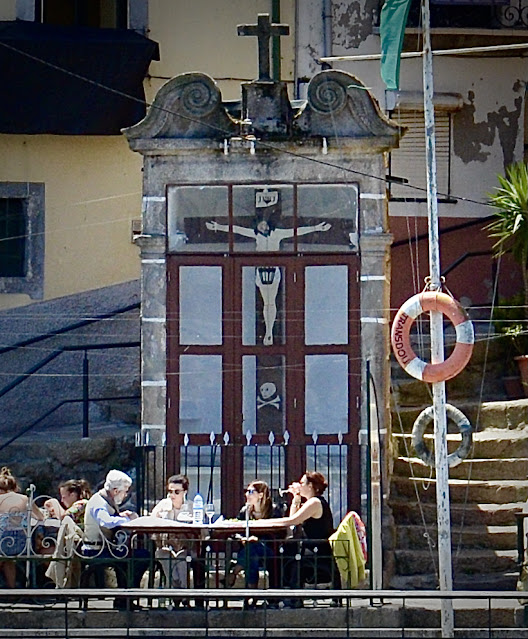 I just finished reading the novel Deacon King Kong by James McBride. According to the author, it’s a book about church. Before you rush out and get a copy, know that there’s plenty of language in it that we try not to use in church. But McBride’s dedication reads "for God’s people - all of ‘em.” And it is.

The title character, who actually has several names, is a deacon in a black church in the projects of Brooklyn. The year is 1969. King Kong is the name of a potent homemade hooch that the deacon is very fond of. Very fond of.

The deacon is generally called Sportcoat by most everybody, thanks to his usual attire of a garish plaid one, and one of the themes running through the book is that no one knows exactly what it is that a deacon does. He did get an invitation to preach one Sunday and had already decided to title his sermon “Don’t Eat the Dressing without Confessing,” but what Sportcoat mostly seems to do is drink that hooch and have conversations with his dead wife (about his failings in life) and his living friends (about the baseball team he coached) and work his many small jobs in the community.

It’s actually the part about the baseball team that fuels the opening action of the novel. Sportcoat’s star player, Deems, has gotten caught up in the drug trade. He quit playing ball just as he was about to go to college and instead became the neighborhood dealer. Sportcoat can’t let it go. He needs to get to Deems and make him see the light: that he is wasting his talent. He is wasting his life. He has made the wrong decision. He has to give up hawking heroin and get back into baseball which will save his life. Sportcoat is so passionate about saving Deems that he finally goes out one morning and shoots him. (This happens on the first page so I’m not giving anything away.)

Deems doesn’t die, and Sportcoat keeps after him, sometimes just doing stuff like saving him from drowning and sometimes roughing him up with harsh words. Sportcoat’s friends beg him to give it up, to run away (now that he is wanted by both the drug kingpins and the police), to save himself and forget about Deems who probably is beyond redemption already. Besides, the longer Sportcoat keeps hanging around them, the more their own lives will be endangered. But Sportcoat waves them off, slips away, and doggedly keeps doing what he does.

Believe it or not, this is a comic novel. I would say it’s also a book about Jesus. It is a book about persistence and redemption and about how the world views success versus what integrity looks like. It’s about community, how community binds us together and protects us in the face of a hostile world, but also how community can get corrupted. It’s about how messy life is and how beautiful; it’s about love both tough and tender. And it’s a book that pointedly explores the question, what will it profit a man to gain the whole world but forfeit his life? Sort of like the Bible.

In today’s Gospel when Jesus tells the disciples about suffering and rejection and death, he is not saying that he just came here to die. He came to live among humans, to show us how to live, and he came for our redemption. He came to save us. But he knew, and he wanted his followers to know, that living the way of Jesus - the way of healing, of lifting up the lowly, of peacemaking, of alleviating suffering and upending social order and erasing conventions that gave privilege to some while oppressing others - living that way was going to be met with powerful, even violent, opposition. He wanted them to understand that he would stop at nothing, even his own death, to reconcile people to each other and to God, to release people from the things that were stunting them, imprisoning them, killing them. He would stop at nothing. And there would be opposition, even violent opposition, to that kind of life.

The disciples were shocked. They’d been hanging out with Jesus long enough to see him attract large crowds, to see them worshipping him, to see his miracles and hear his strange but life-giving teaching, and they were riding the wave of his success at this point. He was a superstar and they were going to share in his glory.

So once they proclaimed him the Messiah, the chosen one, the one who would bring in the Kingdom, they were going down a very different path than the one Jesus was going down. They were imagining Jesus overthrowing the government and putting them in charge. Jesus was imagining dismantling the forces of oppression and restoring the outcast and broken and knowing that the powers that be would not tolerate that.

And so he had to correct them. If they wanted to follow him, they too would become the objects of powerful opposition. They too would be risking their lives. They needed to know what the cost of following him would be.

When Jesus calls Peter Satan, rebuking him for trying to thwart Jesus’s mission, for trying to impose his own ideas and his own mission that were based on the world’s values, it’s a little like when Sportcoat goes out and shoots off Deems’s ear. He needed to get his attention. He had done a lot of teaching and been hands on in instruction, but when the worldly powers took hold and the corruption was setting in, then it was time for strong rebuke. Am I talking about Jesus or Sportcoat? Yes.

So this is the message. Following Jesus is more than declaring that he is the Messiah. It’s not about the title but the mission. Jesus’s mission. And Jesus’s mission is subversive. It will result in rejection and, ultimately, death.

But Jesus also knew that his death would not be the last word, as we will see again ourselves on Easter. Jesus knew that God would redeem him, just as Abraham knew that God would make good on God’s promises. And so he could stand fast in his integrity and live out his countercultural mission to give people - all of ‘em - true life. And so can we.

These are big words. Integrity, oppression, redemption, opposition, countercultural, salvation, subversive, dismantling. This is a big question, what does it profit us to gain the world if it means we lose our lives? As we continue toward the cross and resurrection this Lent, may Jesus break through the noise of the world to get our attention, and make these be more than just words.