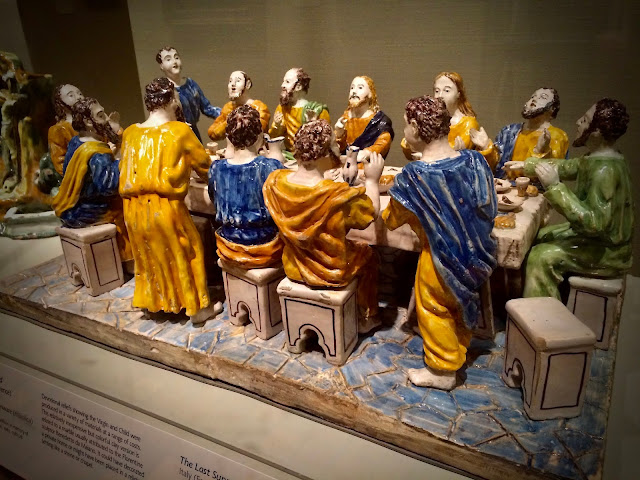 Today we take a break from Lenten collects to observe the Feast Day of Matthias the Apostle. Normally during Lent we do not celebrate feast days, but there are exceptions, and the feast day of an apostle is one of those exceptions. This year the other two feasts we will celebrate are St. Joseph and (of course) the Annunciation.

You may remember that Matthias was elected by the eleven remaining apostles to replace Judas after his betrayal of Jesus and his death (which is described in Acts below, although this is not the only description of Judas's fate). You also may wonder if you ever read anything else about Matthias after this election..... but you haven't. He is not mentioned again. We hope that he bore fruit as Jesus calls us all to do, but we do not know what that fruit was in Matthias's case. (Nor do we know it for several of the others.)

Perhaps it would be a good exercise today to reflect on what it means to be called to step into a role in the midst of trouble. What would be your response to the call? How would you find your place in a group as the one new person? What fruit would you hope to bear?

Almighty God, who in the place of Judas chose your faithful servant Matthias to be numbered among the Twelve: Grant that your Church, being delivered from false apostles, may always be guided and governed by faithful and true pastors; through Jesus Christ our Lord, who lives and reigns with you, in the unity of the Holy Spirit, one God, now and for ever. Amen.

Peter stood up among the believers (together the crowd numbered about one hundred twenty persons) and said, "Friends, the scripture had to be fulfilled, which the Holy Spirit through David foretold concerning Judas, who became a guide for those who arrested Jesus-- for he was numbered among us and was allotted his share in this ministry." (Now this man acquired a field with the reward of his wickedness; and falling headlong, he burst open in the middle and all his bowels gushed out. This became known to all the residents of Jerusalem, so that the field was called in their language Hakeldama, that is, Field of Blood.) "For it is written in the book of Psalms,

`Let his homestead become desolate,
and let there be no one to live in it';

`Let another take his position of overseer.'

So one of the men who have accompanied us during all the time that the Lord Jesus went in and out among us, beginning from the baptism of John until the day when he was taken up from us-- one of these must become a witness with us to his resurrection." So they proposed two, Joseph called Barsabbas, who was also known as Justus, and Matthias. Then they prayed and said, "Lord, you know everyone's heart. Show us which one of these two you have chosen to take the place in this ministry and apostleship from which Judas turned aside to go to his own place." And they cast lots for them, and the lot fell on Matthias; and he was added to the eleven apostles.

1 LORD, who may dwell in your tabernacle? *
who may abide upon your holy hill?

2 Whoever leads a blameless life and does what is right, *
who speaks the truth from his heart.

3 There is no guile upon his tongue;
he does no evil to his friend; *
he does not heap contempt upon his neighbor.

4 In his sight the wicked is rejected, *
but he honors those who fear the LORD.

5 He has sworn to do no wrong *
and does not take back his word.

6 He does not give his money in hope of gain, *
nor does he take a bribe against the innocent.

7 Whoever does these things *
shall never be overthrown.

This one thing I do: forgetting what lies behind and straining forward to what lies ahead, I press on toward the goal for the prize of the heavenly call of God in Christ Jesus. Let those of us then who are mature be of the same mind; and if you think differently about anything, this too God will reveal to you. Only let us hold fast to what we have attained.

Brothers and sisters, join in imitating me, and observe those who live according to the example you have in us. For many live as enemies of the cross of Christ; I have often told you of them, and now I tell you even with tears. Their end is destruction; their god is the belly; and their glory is in their shame; their minds are set on earthly things. But our citizenship is in heaven, and it is from there that we are expecting a Savior, the Lord Jesus Christ. He will transform the body of our humiliation that it may be conformed to the body of his glory, by the power that also enables him to make all things subject to himself.

Jesus said, “I am the true vine, and my Father is the vinegrower. Whoever does not abide in me is thrown away like a branch and withers; such branches are gathered, thrown into the fire, and burned. If you abide in me, and my words abide in you, ask for whatever you wish, and it will be done for you. My Father is glorified by this, that you bear much fruit and become my disciples. As the Father has loved me, so I have loved you; abide in my love. If you keep my commandments, you will abide in my love, just as I have kept my Father's commandments and abide in his love. I have said these things to you so that my joy may be in you, and that your joy may be complete.

“This is my commandment, that you love one another as I have loved you. No one has greater love than this, to lay down one's life for one's friends. You are my friends if you do what I command you. I do not call you servants any longer, because the servant does not know what the master is doing; but I have called you friends, because I have made known to you everything that I have heard from my Father. You did not choose me but I chose you. And I appointed you to go and bear fruit, fruit that will last, so that the Father will give you whatever you ask him in my name.”