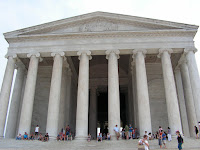 There are a lot of things that are bigger than we are. The Jefferson Memorial, King Kong, Trump Tower, war, the government, and church hierarchies, for example.

Also God.
Most of these Big Things make us feel small. And sometimes impotent. Maybe useless and certainly unimportant. We realize ourselves to be infinitesimally small specks in the universe, mere cogs in the huge wheel of life. And when we decide to "be somebody" within these big things, we usually get lost. Either by losing soul to the machine, by forgetting who (and whose) we are, or by literally going down a dead-end road and being annihilated in the end. There is danger in wanting to play to win in the Big Game. The power trip can be fatal. We can get eaten up, or at least blocked and put down, and we become cynical and cunning and harsh and maybe even lose everything we truly love in order to survive.
On the other hand, God's big thing is not "the machine." God is not "the man" to whom we ought to stick it. God incarnate came to live among us and was annihilated by the machine, and yet somehow that turned out to be salvific. Jesus refused to "be somebody" by the world's rules, and so the world got rid of him. And then God vindicated Jesus' willingness to die instead of losing his soul in an attempt to look out for number one and come out on top. Because Jesus did not resort to the world's ways, God raised him from the dead to show us that it is in vulnerability and "powerlessness" that God's strength can be seen. To have the strength (power) to not give in to the temptation to become the king, to take up the sword, to become famous and powerful and the authority that tramples the people and kills their children through war and slavery and carelessness. To have the strength (power) to not give in to the temptation to sell God's people out for personal gain. To have the strength (power) to not give in to the temptation to prostitute and abase oneself or one's family and friends in order to achieve fifteen minutes of fame.
Big stuff indeed.
Email Post
Labels: counterculture death power salvation