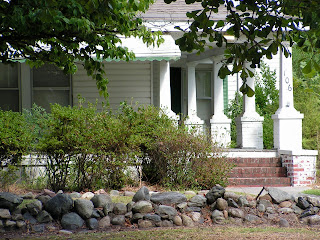 This is a house in the historic town of Bath, NC.  Many homes in this town have these low walls built out of these round stones.

They are ballast stones, put aboard ships that sailed out of the local harbor (Bath is on the Pamlico River which empties out into the Pamlico Sound which affords a route through the Outer Banks barrier islands into the Atlantic Ocean).

Bath was the home of the pirate Blackbeard as well as many other sea faring men who were not quite so famous or so colorful (or pirate-y) and there was an extensive archaeological "dig" recovering his flagship the Queen Anne's Revenge, which he may have run deliberately aground near Beaufort NC in order to allow his pirate crew to disburse before he turned himself in to the governor at Bath.  Who pardoned him.  Understandably, actually.

At any rate, ballast stones were kept in the holds of ships to keep the center of gravity low in stormy seas.  There were additional ballast stones that could be thrown overboard if necessary when sailing in shallower waters or after picking up or unloading cargo (i.e., pirate treasure).  In a town with a busy harbor, which Bath was back in the day, there would be lots of these stones lying around.  Many river/harbor towns feature buildings or fences that incorporated ballast stones in their makeup.  The stones may have come from anywhere, too, wherever the ships had been.  And then one could simply pick them up and stack them in the yard.