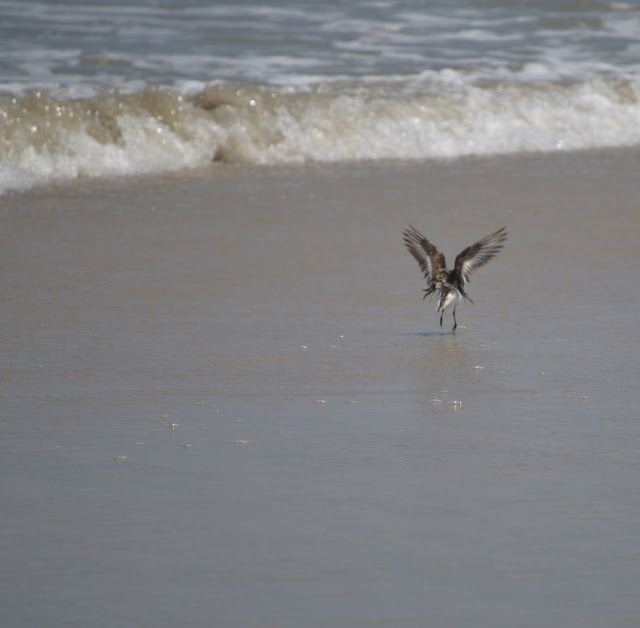 The Feast of the Transfiguration marks the anniversary of my ordination to the priesthood, which took place in the Episcopal Diocese of Atlanta four years ago.

I couldn't decide whether to post a picture of a dancing bird (see above) or a bird just taking off in flight (there'll be plenty of those to come, as I had a very productive photo session at the beach over the weekend). In the end, I went with dancing.  I think that probably is always the right decision.

Plus, I don't feel that I've just taken off, even though I certainly did feel that way four years ago, including the slightly dizzying feeling of flying without a net. Now, I feel joyful, through and through. Every day of the past four years has been a gift, even if I did not particularly want to open some of those gifts. I used to joke that since I'd come to this vocation later rather than sooner, there was an intensity to it that made the time seem more accurately measured in dog years rather than people years.  Only four years? More like twenty-eight!

But not really. In some ways it all feels very comfortable. In others, I still feel like a newbie.

I recently watched the first season of the BBC series Rev, which has become available (finally!) here in the United States via Hulu.  The show revolves around The Rev. Adam Smallbone (played by Tom Hollander), the (Church of England) vicar of a tiny flock in an inner-city London church, and his dealings with his wife, his assistant, his boss, the headmistress of the church school, and his few and eccentric parishioners.  And of course with life.

While the show is funny, part of what I love about it is that it is real. The vicar is beset by the sorts of things that beset all of us in this vocation. Pride, fear, doubt, jealousy, anxiety, frustration, invitations to get hooked by all sorts of people and situations.  It may look ridiculous (it is television after all, meant to entertain), but underneath, it is real.

The final episode is the most real of all. The vicar was criticized on the internet by a television version of The Ship of Fools Mystery Worshipper (he got a -1 on a scale of 1 to 10 for his sermon, which he admitted had not been any good at all), which starts him on a downward spiral.  In one short scene, he lies on a pew, arm dangling uselessly to the floor, praying. "Why, God, do you allow there to be kids who don't know what World War II is, and why did you send that reviewer on my one bad day (is that what I deserve?) and why is there litter all over the graveyard, and why do Nazis always live til they're 96, and why are African women on their way to get water for their starving villages raped by boy soldiers, and why are there no more bumble bees?" he asks.

From there it all goes south. He has lost his way, if not his faith. His most eccentric parishioner reminds him that people look to him because he's the vicar, but he blows the parishioner off. He does some stupid stuff. And some even stupider stuff.

Near the end of this sad show of stupidity, a policeman comes to find him and takes him to a hospital where someone lies dying. She wants last rites. The vicar protests - he's been having a crisis. He's not up to it. The policeman turns to him and says, "She's in pain and she wants release." And then, more sternly: "Are you her vicar or not?"

Adam Smallbone hesitates, but then, suddenly sober, he says, "Then I heard the voice of the Lord saying, 'Whom should I send, and who will go for us?' And I said, 'Here am I; send me.'"  The policeman doesn't know what he's saying. Smallbone explains: "Isaiah, chapter 6. It was read at my ordination."  And he follows the policeman into the dying woman's room.

Ray Barnes said…
Congratulations on your anniversary Penny.
May it always be the joy to you that it currently is, but may you always find more to look forward to.
August 6, 2012 at 12:11 PM

Bill Bynum said…
Congratulations on a very important anniversary for you. I am someone who is much more newbie than you, so you have to view my opinion in that light. However, I have to say that your gifts of writing, photography, and spiritual intensity ideally suit your calling. You cannot know of everyone you are reaching through your ministry. A few, like me, have the temerity to post things to your blog, or speak with you personally, but you have to realize that there are many others, like the kid who sat through my class without ever saying a word or coming to see me for help and then showed up at Homecoming 20 years later to tell me that my class changed his life.
August 6, 2012 at 12:58 PM

Antonia said…
Congratulations, Penny! What a beautiful day to have as your anniversary (mine is always in Lent - this year brought the silver anniversary of my ordination as deacon. Even now I still sometimes feel like your bird!).

I too have laughed and cried over Rev, and can't wait for the next series. Yes, it's very real, and the episode you describe was very powerful.

I just want to echo what Bill said above. Your words and pictures always touch my heart. May your ministry continue to be richly blessed!
August 6, 2012 at 1:27 PM

June Butler said…
Blessings and congratulations, Penny. What a lovely post and picture. A dancing bird seems quite appropriate to the occasion.
August 6, 2012 at 1:48 PM

Vickie Houk said…
Blessings on your ordination and loved your reflection. I now will have to look for Rev on hulu
August 6, 2012 at 6:02 PM

Penelopepiscopal said…
Thank you, Ray! I like that - always find more to look forward to! Thanks for your companionship here, which means a lot to me.
August 6, 2012 at 6:34 PM

Penelopepiscopal said…
Thank you, Bill. I appreciate your having the temerity to post here! You are right that we never know who we touch in our ministry.... this online ministry especially! I am glad to know that it resonates with folks - I just put stuff out there and see what happens and am always grateful to hear from people.
August 6, 2012 at 6:40 PM

Penelopepiscopal said…
Thank you, Antonia, for your very kind words. Transfiguration is a wonderful feast day on which to celebrate my ordination. I'm glad to know you enjoy Rev as well - can't wait to get into season 2 soon.
August 6, 2012 at 6:41 PM

Penelopepiscopal said…
Thanks, Mimi! I'm always aware that you helped me get started in this blogging business by sending folks my way from your "place."
August 6, 2012 at 6:42 PM