Love and Death: Some Thoughts on Mary Magdalene's Feast Day 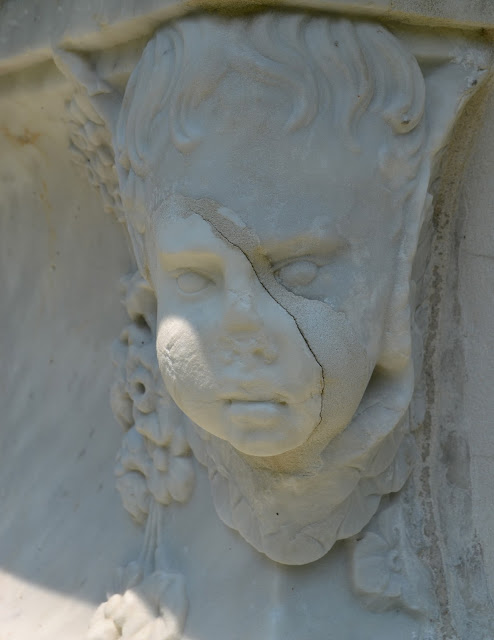 We all know the story of Mary Magdalene, of how she stood at the foot of the cross as Jesus died and then came back to find the tomb empty in all four Gospels, of how she conversed with an angel (or some angels) and how the disciples didn't believe her story, how she was the first to see and talk with the risen Lord. We read the encounter between Jesus and Mary from John's Gospel today and also on Easter.

Then there are other stories of Mary Magdalene. She is generally described in all the Gospels as one of the women who followed Jesus and perhaps provided for him and his ministry. She is specifically described in Luke and Mark (in the extended ending) as a woman from whom seven devils had gone out, presumably having been exorcised by Jesus. Other than that, no details.

This lack of information didn't stop some of the early Church fathers, however, from conflating Mary Magdalene with any woman in the Bible who was called a "sinner," and those early Church fathers also seemed to consider sexual sins as the only sins that were (could be?) committed by women. Before long, Mary Magdalene was widely accepted to have been a prostitute, sort of the opposite of Mary the Mother of Jesus, the Virgin.

So, anyway, two of the Gospel stories tell us that Mary Magdalene was cured of some kind of serious demonic possession and all of the Gospels tell us that she not only followed him generally but that she was there at the bitter end, after the male disciples had deserted Jesus, standing at the foot of the cross. And they all tell us that after his death, she could not stay away but returned to the tomb to minister to his body. She did not expect to see anything but a dead body, of course. Hers was not a story of hope (nor is hope the story of any of the disciples) but of faithful devotion.

That devotion must have been in response to having been healed by Jesus. If she had seven devils, whatever that even means, she must have been incredibly, mightily afflicted.  And so her healing must have been a mighty experience. And her response is the kind of devotion that kept her with him throughout the unimaginable horror of his excruciating death and hurried burial. She accompanied him faithfully throughout his ordeal and beyond. Her love and devotion to him was as strong as death, to be sure.

And this is what I like about the story of Mary Magdalene. Jesus made her whole, bringing her back from the grip of something that had taken over her life, and her response was to stay with him no matter what. She shows us resolve and strength and power that is all borne of gratitude. In a way, to give the early Church fathers the benefit of the doubt, this is why she was conflated with the woman/sinner who washed Jesus feet with her tears because she was so grateful for the forgiveness that she had received. A person who has been forgiven the most shows the most gratitude, Jesus told Simon the Pharisee. Mary wasn't that woman, and she wasn't any more of a sinner than any of the rest of us, but she does show that the person who has been healed of the most serious affliction is the person who will respond with the most devotion.

Mary Magdalene shows us what the strongest kind of bond that a human can have with another person looks like. Not even Mary the Mother of Jesus is shown to have this kind of bond with him in the Bible. And that bond is not shown as spectacular or bombastic but simply unswerving. Love is as strong as death for us humans.

But for God, love is stronger than death. As much devotion as Mary Magdalene shows Jesus, Jesus shows us all even more and stronger love and gives us reason for a hope that none of the disciples, nor Mary his mother, nor Mary Magdalene knew.

Mary Magdalene's last scene is her announcement to the disciples: I have seen the Lord. He is risen!

And therein lies our own hope of salvation, born of unswerving love by God. Even if we have not needed to be cured of some mysterious affliction, we all have need of salvation because we and our world are broken.  And because of love, that salvation is ours. May we, like Mary Magdalene, respond with faithful and unswerving devotion, too.

Nancy Wallace said…
Great post - thank you. I've just updated my own earlier post on Mary Magadalene with a link to this post.
July 22, 2013 at 1:32 PM

Penelopepiscopal said…
Thank YOU, Nancy! Your post was great. Readers can find it here: