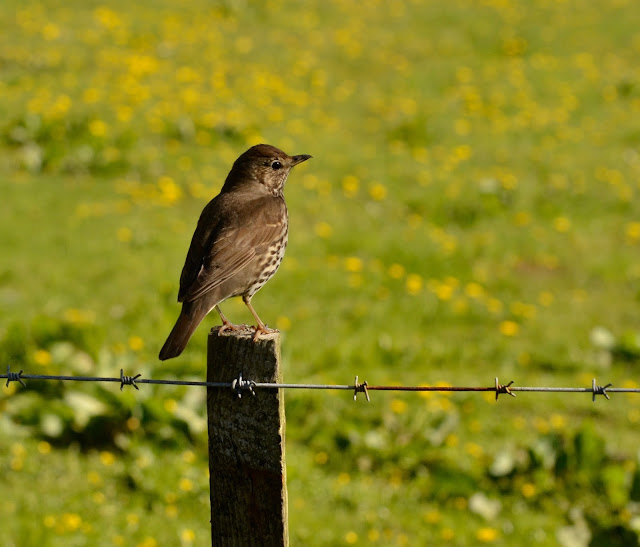 It was a shame that we didn't get to hear the song of this song thrush. But as you can see, it was surveying the landscape without comment. And what a beautiful spring landscape it was, that sunny afternoon on Iona.

Robert Browning has this to say about April and thrushes in his poem Home-thoughts from Abroad:


Oh, to be in England,
Now that April’s there,
And whoever wakes in England
Sees, some morning, unaware,
That the lowest boughs and the brushwood sheaf
Round the elm-tree bole are in tiny leaf,
While the chaffinch sings on the orchard bough In England - now!
And after April, when May follows,
And the whitethroat builds, and all the swallows -
Hark! where my blossomed pear-tree in the hedge
Leans to the field and scatters on the clover
Blossoms and dewdrops - at the bent spray’s edge -
That’s the wise thrush; he sings each song twice over,
Lest you should think he never could recapture
The first fine careless rapture!
And though the fields look rough with hoary dew,
All will be gay when noontide wakes anew
The buttercups, the little children’s dower,
- Far brighter than this gaudy melon-flower!

Ray Barnes said…
Lovely pensive looking thrush Penny. Sadly on the list of dwindling species in the UK now.
Robert Browning's beautiful poem is just about the only one of his works which has stayed in my memory. It is so perfectly accurate and paints a wonderful picture.
June 25, 2015 at 10:50 AM

Penelopepiscopal said…
We saw this thrush and/or its mate or something several times and I thought they were perhaps common, and then found that they are not. Just wish we'd heard it sing!
June 25, 2015 at 4:57 PM