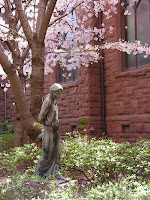 And so we come to the burial.

After the totally out-of-control reckless chaos of Jesus’ arrest in the garden by people with swords and clubs; after a kiss of betrayal from one disciple, and three denials by another during the night; after a brutal beating, and mocking, and heaping of insults and humiliation upon Jesus by a mob of Temple police and priests; after being thrust before the Jewish council and then before Pilate and then before Herod by those whose only intention was to achieve Jesus’ total destruction; after the people demanded that a murderer be released instead of Jesus; after being nailed through the hands and the feet to a rough wooden cross; after suffering the taunts of one of the criminals being crucified next to him; after enduring the mocking by the soldiers; after three hours of agonized dying by slow suffocation in the noon-day sun; after he cried out in a loud voice to God and after dying in front of a crowd of onlookers who were gathered simply for the purpose of watching a sensational, bloody spectacle .....

after all that reckless chaos and display of cruelty, Jesus is buried.

And the burial is done properly. Decently, and in order.

Joseph of Arimathea, who apparently has the status to successfully petition Pilate for the body of Jesus, gently takes him down from the cross, and wraps his body in a linen cloth, and lays his body in a tomb that has never been used for a burial. And the women look on quietly and respectfully, and mark the place in their minds so that they can come back later with the spices and oils they will prepare for anointing the body. And then because it’s nearly sundown, they all go home to observe the Sabbath. Decently, and in order.

The story goes from total chaos to dignified propriety; from rage and horror to gentle and faithful observance of Torah piety. The mob wreaks havoc and Jerusalem convulses with violence and then the righteous come forward to do the proper thing.

And of course it’s the only thing they can do. In the face of tragedy, the only response is to be present and faithful. Which in this case is to give the bruised and bloody body of a just man a decent burial......

Some weeks ago, a newborn baby boy was abandoned on the grounds of St John’s Episcopal Church in College Park. It was one of those really cold days in February and the infant was left outside. Who knows why. By the time the baby was found, and the emergency workers came, the baby had already suffered too much. And so, soon after he arrived at the hospital, he died from exposure. No one knew who the parents were or why they did what they did, why they did not at least ring the doorbell or place an anonymous call or do something other than leave a helpless newborn out in the cold. The priest and the staff were devastated that they had not had a chance to save him. That he had not had a chance to live.

And so they held a memorial service for him at St John’s. The sanctuary was nearly full with the emergency workers right up front, along with people from church and also the surrounding community and even a couple of TV cameramen. The priest stood up to give the homily and asked out loud in front of God and everybody all the questions that we had been asking over and over that week. Why this had happened, who were the parents? Why did God let this happen? And where was God while this baby was dying? He named for us our feelings - our bewilderment and inability to understand what the mother or father or perhaps both parents were thinking when she or he or they did this; our anger at the mother, our anger at society; about how we feel so helpless in the face of tragedy; about how much it tests our faith when innocent life is destroyed. He said he had no answers. He said the only thing we could do was give the baby a decent burial.

We nearly ran out of wine at the communion, because everyone came to the altar to receive the assurance of God’s presence with us all in our helplessness and our grief.

It was a decent and proper burial....

Now it is time for us to go into the quietness and stillness of the tomb, both in sorrow and shame and guilt, and also in expectation. Knowing full well the chaos and the tragic spectacle that life in this world too often is, let us surrender into the embrace of the divine man who knows our grief, our wounds, our humiliations, who stretched out his arms upon the hard wood of the cross, longing to gather to himself all the world, the mob and the righteous alike. Now that we have endured the horror with him, and witnessed the faithful response of those who loved him, let us now go too, into the deeply quiet and still aftermath with him, to await the resurrection.