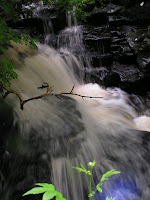 Not that long ago - a little more than two weeks in our time and three chapters ago in John time, Peter was standing around another charcoal fire. At that time he was with the Temple police and some slaves belonging to the High Priest, and they were all warming themselves against the dark night while Jesus was inside the High Priest’s house, being interrogated after his arrest.

Peter had followed Jesus to the house, and through the efforts of another disciple who was known to the high priest and his household, Peter was brought inside the gate.

We might look at Peter and the unnamed disciple as spies, checking out what was happening with Jesus, trying to get some useful information from the little people outside. And perhaps they were.

Or we might look at them as standing with, as in one of, the traitors, just as Judas stood with the police in the garden of Gethsemane an hour or so before.For after all, what Peter did around that charcoal fire that night was to deny Jesus three times.

Now Peter sits around another charcoal fire, just after daybreak, just after the resurrected Jesus has appeared to the disciples and produced a miracle of abundance. Another miracle in fact. For remember at the beginning of his ministry Jesus provided an overabundance of wine at a wedding at Cana and then in the middle, an overabundance abundance of bread on a mountain near the Sea of Tiberias. Now Jesus provides a huge catch of fish, and the disciples recognize him (at least the beloved disciple did) in the provision of lavish abundance. And they all sit and eat together around a charcoal fire in the gathering light of the early morning.

And Jesus asks Peter three times, Simon son of John, do you love me? This is a very serious question; Jesus uses Peter’s official, proper name, not his nickname. Simon, son of John, do you love me? Three times he asks. And three times, Simon says yes, Lord, I love you; you know I love you. And the first denial, and the second, and then the third denial all go up in smoke. Spy or traitor, Simon Peter is forgiven around this fire for what he did around that other one.

But more than that, Jesus tells Simon Peter that if he loves him, he must tend and feed Jesus’ sheep.

Jesus has been all about abundance in the Gospel of John - indeed, he explained in his discourse about being the good shepherd that he came so that the sheep might have life, and have it abundantly. Abundant life for those whom the father loves, which just happens to be the whole world, is the reason for the incarnation. The word was made flesh and dwelt among us and we have seen his glory and it is about life abundant. “The glory of God,” says the early church bishop Irenaus, “is a human being fully alive.”

Now Simon Peter is a pretty alive guy already. He’d be great on a tv soap. He makes a scene when Jesus wants to wash his feet (you’ll never wash my feet, Jesus, he says one minute and then the next: not only my feet but my head and my hands also!). He races with the beloved disciple to see who can get to the empty tomb first (and he loses). He cuts off someone’s ear with a sword in the Garden of Gethsemane. He fishes naked and swims with his clothes on. But in this scene of forgiveness and commission, Jesus gives Simon Peter a new kind of life, a life of new purpose and invites Peter to focus his life to participate in Jesus’ mission - to continue to carry it on after Jesus is gone.

Feeding the sheep and giving them life abundant is what Jesus came to do, but he is not going to be on earth for long, and so somebody else has to do it going forward. Jesus isn’t just going to join the Father in Heaven and throw down some life abundant here and there for people to catch. Somebody here has to carry on the work.

And Peter has come to Jesus through the water and been forgiven (sounds a little like baptism, doesn’t it?) and now Jesus tells him: feed my sheep. Tend my lambs. Take care of the people of God and give them abundant life.

The mission Jesus calls Simon Peter to - and by extension us - is to be about abundant life for others. For us to feed the sheep and tend the lambs, for us to remember the wine and the bread and the fish

and be about the abundant life for others. I’m headed out, Jesus is saying, so you carry on.

It is no wonder that so many churches participate in some kind of feeding program. Food pantries or sandwich making or dinner cooking for shelters and places like The Church of the Holy Comforter as I know many of you do. Literally feeding people who are hungry is an obvious and basic way to feed Jesus’ lambs. We also feed and are fed in the bread and wine at the Eucharistic table; we are reminded each week that we meet Jesus at this table in the act of abundance that he provides in the Eucharistic feast.

And all of that is good. Very good. Many of us get it: feed my sheep.

But what would it look like not only to feed Jesus’ sheep but to give them life abundant?

In terms of food, it might look like the movie “Babette’s Feast,” in which a woman spends all the money she won in a lottery - ten thousand francs - to provide a single, wonderful meal to a group of puritanical old folks who have given up their dreams - particularly the two sisters for whom she works, who both gave up thoughts of marriage, and one who also gave up her gift of music, in order to carry on the work of their father who had founded a strict Christian sect, which was now dying out for lack of converts.

Babette spent an entire week in Paris all kinds of ingredients to be delivered to their dark, frozen village in Denmark and we see a procession of cages of live quail and a turtle and baskets of exotic fruits and cases of wine filing past the villagers’ wondering gazes. We see her rolling out crusts and preparing garnishes, and polishing silver.

It is truly a feast, and in the eating of it, the little group of austere ladies and gentlemen who had viewed the whole project with suspicion and vowed to eat it only out of politeness, who promised each other to refuse to enjoy even a bite of it for fear of the sin of sensuality instead experience grace and reconciliation with one another. Babette gave them food, for sure, but not just food - she provided a life-giving abundant feast through which the people experienced hope and reconciliation and joy and pleasure.

But it is not just about food. One does not live by bread alone, as Jesus says elsewhere. In John abundant life is symbolized by the extravagant excess of wine and bread and fish but that’s not all there is to abundant life.

Several years ago, some folks at All Saints’ Episcopal Church in midtown Atlanta opened a clothing closet for children. But unlike one of those jumbled stuff-in-the-basement deals, this is an extravagant, abundant clothing closet. It’s set up like a fancy boutique, with stylish, good quality skirts and pants and dresses and tops displayed attractively on racks and shelves just like in a cute children’s shop. It has a roomy dressing room with mirrors, and a well stocked play space. Clients who visit are assisted by a personal shopper who helps them cash in their vouchers for each child any way the parent sees fit - no pre-packed bag of basics but an experience of choosing according to both need and taste. The shop has basics like socks and underwear and shorts and shirts and skirts and brand new shoes,

but also, at the checkout, each child also gets to pick out an extra something from the treasure chest at the desk - some glittery flip flops or a tutu or Superman pajamas.

The shop is called Threads and its mission statement is “to clothe children with dignity.” I was part of the group that brought Threads into being. And I have to admit, at first I was all about simply providing the basics. Plain, clean, basic no-nonsense clothes. Pants, shirts, skirts underwear. No tutus, please. School shoes, not flip flops. But people gave extravagantly. One mother explained, my daughter loves princess tiaras, why shouldn’t other daughters get them, too? And so the treasure chest was born -

after the basic stuff you really need goes into the bag, here comes the opportunity to experience abundance.

Not to mention the parent’s experience of really having the power to choose what the parent wishes to provide the child. No need for pants? Then two shirts; three dresses instead of shorts and a top. An opportunity to make choices given to those for whom life offers few choices.

Sometimes people cry when they shop at Threads. Not because they are sad or ashamed about having to resort to charity to provide for their children but because they have experienced the life-giving abundance of being treated with respect and dignity; they have experienced generosity that means much more than what they take home in their shopping bags. And people who volunteer at Threads sometimes cry, too, because they’ve never had the opportunity to be co-creators of God’s generosity

in relationship with those whom they wish to serve,instead of just writing a check or dropping off a bag of stuff.

And the result is pleasure and grace and hope and reconciliation for all.

Peter is forgiven three times. One would have been enough. Peter receives forgiveness abundant.

Imagine what would it look like if we approached all our ministries in the world - the feeding of the sheep - as an opportunity to provide life-giving experiences? To not simply provide basics but to make possible - even if just for one meal, for one encounter - life abundant?