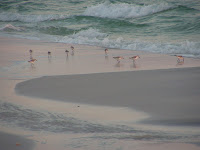 There's always a lot going on at the beach, even if it is not crowded with people. (There are a good number of folks here now, but I've seen it much more populous.) Today's excitement involved migrating cownose rays. I noticed while I was eating breakfast on my third-floor balcony some dark triangles swimming through the water, just a few yards off shore. At first I thought they were some kind of birds, but they didn't surface, and I realized they were rays. I guessed cownose rays because they were swimming so near the surface - the southern sting rays scoot along the ocean floor.

There were about twenty-five of them, but they grouped and regrouped frequently; sometimes one group would swim toward another group and meet up, and off they would all go together. Sometimes a couple of rays would go off on their own, although seldom did I see a loner. Sometimes they would swim in a line one behind the other; other times they would line up like a phalanx; once they even seemed to be in a V-formation like the pelicans that were gliding overhead. They didn't seem to be doing anything in linear fashion - they'd swim for a while in one direction, then double back, then swim out into the deeper water, then back into the shallows. Cownose rays are in the eagle ray family, and they can swim fast if they want to, and I enjoyed watching them book it for a while and then drift around more slowly as if to enjoy the scenery.

A couple of people were out in sea kayaks and one teenaged boy was paddle surfing (standing on a surfboard with a large oar), and they were all looking for the rays and paddling toward them to glide alongside for a while. Most of the people on the beach or in the shallows didn't seem to know what was going on.

I watched this for a couple of hours from the balcony. After lunch, when there were still small groups of five or so here and there, I decided to get in the water and see if I'd see any up close. I'm a sucker for swimming with wildlife. (Except, probably, sharks.) So I waded in to a spot that was pretty shallow for a goodly area - the water is pretty clear so I figured to get into a place where I could see the farthest. Sure enough, within five minutes, here came a line of dark triangles moving quickly toward me, so I moved steadily toward them as well. But they veered off into the deep water when they got within six feet of me. I hung around a while longer and a lone dark triangle approached slowly, flapping its "wings" so that one came all the way out of the water. It, too, veered off before getting too close. Still, it was very neat.

Later in the day, by way of some googling, I discovered that cownose rays migrate in large numbers this time of year. There was an article about folks at another beach seeing them last week. You can read it and see the pictures from that article here. I took a few shots but don't know if they will show anything.