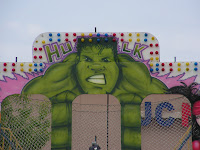 This is a sermon I preached today at the Episcopal Church of the Holy Comforter in Atlanta, a community that serves all kinds of people including many who suffer from physical and mental disabilities. The texts are Galatians 3:23-29 and Luke 8:26-39.
++++++++

And what Jesus finds at the other side of the lake is a man whom even the Gentiles don’t associate with. A guy who doesn’t have a home - he lives in the cemetery, usually chained up except for when he gets loose. He doesn’t have a job or a family, either. He doesn’t even have clothes. This is not the kind of guy the regular people like to associate with, neither Gentiles nor Jews.

The man is so used to being outcast, so used to being naked in the cemetery instead of wearing clothes and living with a family in his own house and having a job to go to every day, that he doesn’t really know who he is. He’s living in an alternate universe from the world other people seem to live in.

Jesus asks him his name - Jesus is always polite like that, going up and talking to people other folks don’t think are normal, just having conversation with them and touching them and treating them as if they were normal even if other people don’t. Jesus asks this man his name, as any polite person would do upon meeting a stranger, but the man can’t even say what his name is.

He says he is Legion but that’s not a name, that’s a number. A huge number, the number of an entire Roman army. It signifies all the things that torment and imprison this man. He doesn’t have an identity - his name is all those things that hold him captive. He is defined by what has uncontrollable power over him. He doesn’t even have a name, maybe doesn’t even know his name any more, he’s just a walking example of lots of things gone wrong.

That’s who he knows himself to be and that’s how others seem to know him, too. He’s wild. He’s scary. He’s not “normal.” But Jesus has sailed all the way across a big lake just to see this guy who doesn’t dress properly or live in a house and calls himself Legion because he has forgotten that there is anything else to him besides his torment. He has accepted the names others might call him and forgotten his own name.

And Jesus has come to this man in order to restore him to wholeness, to restore him to his community. Jesus has come to give this man a new identity, which St Paul explains to the Galatians is the identity that we all have called “Child of God.” Not simply man or woman or slave or free or Jew or Gentile or homeowner or homeless or normal or tormented. But Child of God first.

And so the word gets out (due to the issue of the pigs all jumping into the lake) and the people from the community, the ones who do wear nice clothes and live in their own houses and who are not tormented, they come out to see what’s going on and they find this man who had been living in chains in the cemetery sitting at Jesus’ feet, clean, wearing clothes, and no longer in torment.

But the people are not happy. They are scared. Luke says they are seized with great fear. They are so scared that they ask Jesus to leave on account of what he has done. Whatever it is that Jesus brought with him to this side of the lake, whatever it is that caused this man to be transformed from tormented to normal, they don’t want any of it. They want Jesus to get back into his boat and go back to where he came from and leave them alone.

The man wanted to go with Jesus. He wanted to follow him on the road. And you might think Jesus would be happy to have him with him. But Jesus not only gives the man his identity back, he affirms that his vocation is to stay in his community and be who he is. Be a living, breathing example and testimony to what God has done for him right there in his own community. Just be who he is, right there in his own community.

And I am thinking this scared the people even more. Now this man who used to be in chains, who used to live in the cemetery and in torment is going to come in from the cemetery, the edges, the margins, and live right there with all the rest of them. They can send Jesus away, but the work of God goes on right there in their community. The transformation has happened and will continue to happen because they will all be in community together instead of kept separated and with some of them marginalized. They are changed, forever, all of them.

“I am not defined by addiction or homelessness or mental illness or poverty or hunger or humiliation like she is. I am someone else.” This is the way some of us look at ourselves, as not like the people who scare us, who are different from us, who live lives we can’t relate to.

We’d rather keep our labels and have other people keep the labels we put upon them, but Jesus comes across the lake just to see this guy and to restore him to himself, to put him back into community where he belongs, where he has a place, a home, a safety net. To show him that whatever else he may have been and may be now, he is first and foremost a beloved child of God. And yet this disorients the other people and it makes them afraid.

Every community has its tormented Geresenes in chains. People who because of mental illness or addictions or a host of other torments are unable to live what society deems a “normal” life - with a job, a home, a family, and basic necessities like food and clothing and baths and haircuts. These are the most vulnerable people in our society - those who do not have the support network and safety nets of home, job, family, of basic necessities. So long as they “stay in their places,” as far as we are concerned, we are comfortable. When they actually become part of our community, we are uncomfortable.

And we can choose to accept and even embrace that and grow into the fullness of humanity that Jesus came among us to embody. Jesus was a guy who had no home and was pretty scary himself because of who he ate with and and who he touched and who he loved and cared for. Some people wanted to keep Jesus on the margins too. He upset them. He wouldn’t leave the divisions in place. He wouldn’t leave the outcasts outside but brought them right in and showed both the outcasts and the in crowd that they were all first of all children of God. And then Jesus challenged everyone to deal with that. And in fact he left them to deal with it themselves.

God’s people exhibit breathtaking diversity. We have much to learn from one another. Jesus came to free all of us - those of us who are obviously in chains to illness, poverty, addiction, humiliation, and those of use who may look like we are free but are actually in bondage to our notions about how some people need to stay in their places on the outside because they scare us. Some of us are in chains because of our own fears and we are not able to be who God created us to be because of it. Some of us will set up barriers and hide behind them if we can’t get others to stay on the outside themselves.

But somehow I think that even if we try to set up barriers for others or try to hide behind barriers ourselves, the good news is that Jesus will come and find us and restore our identity to us. Jesus will take away our chains and remind us who we are - children of God, each and every one of us - and encourage us to just be who we are, in our breathtaking diversity and yet all one in Christ Jesus, together. Amen.

Thanks for sharing this powerful sermon. It actually fits right in with the directed study I am doing on pastoral care and mental health disabilities. I am narrowing my focus to theological anthropology. As you note, we would do well to embrace the truth of the Imago Dei. What a difference it would make to see ourselves a d others as a child of God.

Penelopepiscopal said…
Thanks, Charles. I think it would make a difference if we were all willing to live in community, too, in acting out of that vision. That's one of the things I like about Holy Comforter - an attempt to live out of that idea.
P
June 20, 2010 at 7:01 PM