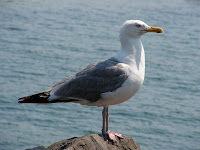 Today was a different day. The animal life was all in the air instead of in the ocean (I did see a lone ray gamboling along, riding the waves, and a long, thin, dark fish, maybe a dogfish - it was too skinny to be a ray - swimming purposefully toward the shore and then back out into the deeper water around lunchtime). The neighbors three cottages over have a purple martin house on a pole next to their walkway to the beach and a pair of martins (insect devouring members of the swallow family, forked tails and all) have been working on their nest today. Both the male and female tackle this duty, and there was much flying over my balcony/deck by purply-black birds with beaks full of twigs.

Someone down the beach was flying a dragon kite. It had wings and feet and everything; I'd not seen one like it. Of course I did not have my camera with me at the time. Here is a photo of a similar one.

A small group of royal terns were doing some serious fishing during the late morning hours. These swallow-tailed brilliantly white birds with their orange head ornaments hover over the shallow water and then dive straight down to grab a small fish and immediately head back up into the air. It is interesting to watch them hover - their forked tails seem to help in this endeavor, and they tuck their feet just so. Meanwhile, a group of six or so brown pelicans spent hours just floating in a group just outside the narrow lane of sandbar about 150 yards off shore. They looked like a group of teenagers around a campfire, all turned toward one another in a circle. They finally roused themselves to do a little fishing, and when they sailed by just a few feet over my head in their V-shaped formation, the huge birds cast a shadow along the ground like the sun going behind the clouds.

Of course, the ubiquitous laughing gulls flew over my head from time to time as I was reading on the balcony. They are really very elegant birds, gliding overhead and turning their black noggins just slightly from side to side as they scour the area below for food and other interesting things. It is the call of the laughing gull (you can hear it at the link above) that, more than anything, tells me I'm near the ocean. I love to see them and to hear them, even though they can be rather raucous.

There were a couple of other oddities to note, both of human making: first, there is a sailboat run aground down the beach. It has been there ever since I arrived; I'm sure there is a story to go with it, but I don't know what. It just seems to have washed up. The sight of it reminded me of the time years ago when, while I was out for my daily walk, I came upon a small airplane that had (apparently accidentally) landed on the beach. It plowed deeply into the sand and it took a while to figure out how to remove it.

The other oddity was someone down the beach the other way has a float that is shaped like a large sofa bed. With the bed part pulled out, sort of. I didn't see them out in the water with it - it was just "parked" at the bottom of the stairs when I went by. I'd like to see it in action.