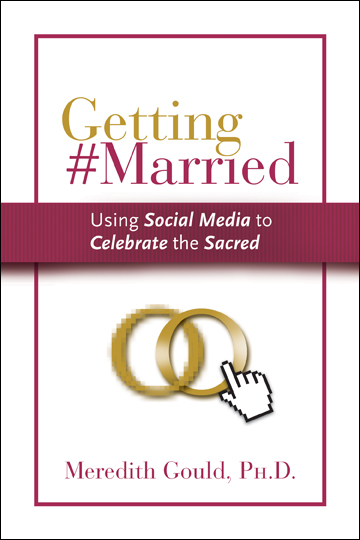 We're on a roll with books this week!


Today's post is an interview with my friend Dr. Meredith Gould (@meredithgould), Roman Catholic self-proclaimed gadfly, sociologist, author, and founder of the #chsocm (church social media) blog and moderator for most weekly tweetchats.  Her personal blog is More Meredith Gould and you can find out more about her here.

Meredith married Episcopal priest The Rev. Dan Webster (Canon for Evangelism and Ministry Development for the Diocese of Maryland) on November 5, 2011.  Their wedding was a major social media event, having been planned and celebrated via Facebook, Twitter, and Meredith's blog, and gathering friends and family from all over to attend the ceremony both IRL (in real life) and virtually (via U-Stream).  I attended IRL (meeting both Meredith and Dan for the first time in person!), but I also participated in the pre-wedding stuff via Facebook and Twitter.

Meredith's new book Getting #Married has just been published (print and electronically), available through CreateSpace and from Amazon.  Her book is both a "why-to" and a "how-did" with suggestions and questions to consider about using social media for wedding planning and to make one's wedding a public event ─ as weddings traditionally are supposed to be!

Ready for the interview?  Read on....


So, Meredith, even though you’re a social media pro and I'm sure it just seemed natural to use social media for your wedding, was there an initial thought, issue, or event that sparked the impulse to make yours a Very Social Media Wedding versus simply using social media for some publicity and personal enjoyment?

A series of events plus a personality quirk got me keen on using social media and other online technologies for everything wedding-esque. Events include conversations during and in between church social media (#chsocm) chats about the value of social media.  I was especially “sparked” by conversations about the propriety of using it during or for worship.

For everyone who declares it distracting and wrong there were others who argue social media is helpful and a tool for evangelization. I’m one who says there’s a way to use social media in a way that enhances the sacred and how we absorb liturgy.

I’ve also learned over the past four years of involvement with social media (early adopter!) that these are über-experiential media.  Telling people about social media just doesn’t work, showing does.  Providing an experience of using social media wisely and well with care and propriety is more compelling than endlessly arguing about it.  I figured (and Dan agreed) that our wedding would be a perfect living demo laboratory. It was!  I wrote Getting #Married to describe and explain the why of it, as well as the how.

The personality quirk? I’m always trying to make a point! Charming or annoying, depending on your perspective/tolerance.

I know you're a big fan of The Holy Spirit.  What surprised you the most about using social media for planning and celebrating your wedding?

BIG fan of the Holy Spirit. Veni sancte spiritus!  I was totally unprepared for what came our way via Twitter and Facebook. Deeply moving . . . to grateful tears.

As you know but your readers might not, my “day job” involves providing social media strategy and editorial services for the healthcare industry.  I’m blessed with a large, far-flung community of colleagues, one of whom organized a #tweddingshower from 3:00-6:00PM the day before.  She invited folks in the #hcsm #hcmktg and #mccsm communities to tweet well-wishes.  I set up CoverItLive to capture everything tagged #3xCharm and #tweddingshower during that period of time and was deeply moved by the support and love of community.

I was also surprised and delighted by how people from different parts of my life got to know one another because of social media.  Later I’d discover how a friends in Oregon, Michigan, and Maryland chatted about crying while watching the exchange of vows. That could not have happened without U-Stream and Twitter.

By your own admission, there were times (thankfully few!) when your inner Bridezilla threatened to upset your equilibrium as the wedding date drew near.  How were you able to use social media to deal with that all-too-common aspect of wedding planning?

Ah yes, my Dr. Bridezilla moments.  Glory be, etc.  I mostly used my personal blog for times of head-exploding aggravation, then linked those posts to Twitter and Facebook to share the love.  Early on I found a fabulous image of Godzilla dolled up in wedding gear and would post that at strategic times.  I mostly used images and YouTube videos to convey whatever fit I was pitching, rather than writing it all out in a post.  My little way of practicing the impending  role of Clergy Spouse.  Thanks be to God!


Congratulations, Meredith and Dan, and here's to many years of happiness together!