You know how things go. There are some people in your group (school, church, neighborhood, bridge club, you name it) who get all grumpy about how things are going in their school, church, neighborhood, bridge club, you name it. They become fixated on certain personalities or problems or procedures within the school (etc) and get their noses out of joint. Or at least their moods plummet and they begin to seem rather Eyeore-like in conversation. ("If it is a nice day. Which I doubt.")

Some of us notice this with our kids. They are so self-absorbed and all kinds of money is spent on retail or actual clinical therapy or whatever to dilute the drama and moodiness.

The classic "treatment" is to get people out of themselves, to stretch their worlds, to help them get involved with something bigger than their own little group. To shift the focus beyond self to the other. This is what I often "prescribe" to those who come to me with stuff like this, both friends and family and people to whom I offer pastoral care.

So, the other day I was feeling really grumpy. I decided I really needed to withdraw into myself for a bit. To stay home. Maybe take a couple of naps. Maybe see a movie. Buy a new outfit. At best, to read a book (which I'm really enjoying and shall probably write about later). And while I don't think I'm fixated on any personalities or feeling bad about the way my world is going, I did recognize a grumpiness that I know better than to ignore.

But I forgot about the treatment. I forgot that dialing everything down was probably not the answer, but instead I ought to lift my gaze beyond my current horizon.

Well, as you probably know, that doesn't often happen by itself. Instead I needed someone to invite me outside my little circle. I probably get such invitations three times a week, but it is often necessary to deflect them, often for good reasons. Boundaries. Limits. Interest level. But for whatever reason, the light finally went off today. I got a couple of invitations that I decided to accept.

And, voila, the grumpiness is headed out the door. Duh. 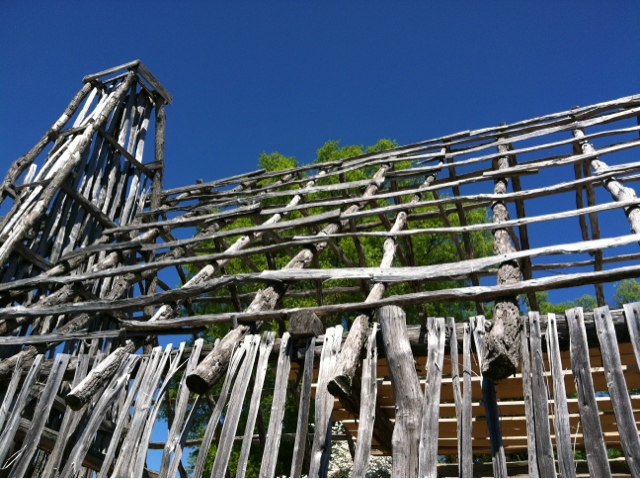 Ray Barnes said…
Agreed Penny. The perfect remedy.
The problem is when there never, or almost never are any invitations.
Physician, find me an answer to that one.Please!
April 23, 2012 at 5:14 PM

Blue Eyed Ennis said…
Wonderful post and much wisdom in it !!
I hope you enjoy your experiences
Blessings
April 23, 2012 at 5:25 PM

Penelopepiscopal said…
Ray, you are right that a certain amount of this is out of our hands. But here are a few thoughts:

First, put it out there in the cosmos that you're scanning the horizon. Prayer, comments to or questions of friends in person or by email or otherwise. Especially if you have an area that you know you're interested in. Like animal welfare or gardening or books or ushering at the theatre or visiting the homebound etc.

Second, be receptive and creative. Some "invitations" come by mail or phone or in person or by email and some are sitting under your nose without your being aware. Some don't look like "invitations" but actually are. Discernment is important here.

Third, ask. Ask someone who is connected to lots of things, or to one thing that you are particularly interested in, about how to get involved. If there's something you know you'd like to do, find out who heads it up and ask them how you can help.

Fourth, be willing to fail. Something might seem a long shot or you might not know that you're interested, but what the heck. You can always decide later to do something else. But it gets you moving and you'll learn something, even if it's that you don't like subject X.

And finally, be patient. One of the things that came to me was actually begun more than a year ago through a conversation with someone. (See #1 above. Put it out there that you're looking.) Seeds planted now may well come to fruition much later.

I hope this helps. Sometimes it does seem that a harmonic convergence is necessary!
April 23, 2012 at 5:48 PM

Penelopepiscopal said…
Thank you, Philomena! We'll see how things go. I'm not even sure if either of these things will amount to anything, but the exercise in broadening my horizons is valuable enough!
April 23, 2012 at 5:49 PM