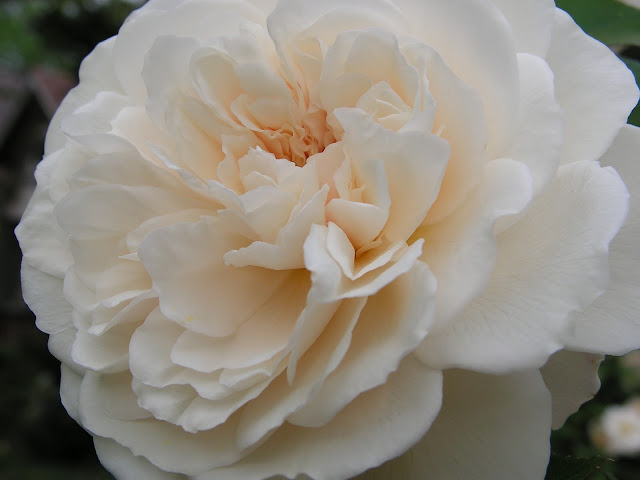 This is a climbing white tea rose Sombreuil. It's also known as Colonial White. Some call it a tea noisette. They are supposed to be very fragrant, but mine's not particularly so.  Apparently people who know about these things argue that somebody got this rose mixed up with another rose and the same rose ended up with two names. Or maybe it was that two different roses ended up with one name and now no one knows which is which.  Either way, it has a beautiful blossom and some fairly wicked thorns and doesn't look like much when it's not blooming.

One has to put up with a lot with rose gardening. Often I think I don't much like or need a particular one after its thorns have ripped another shirt or I've had to crawl around for way too long to try to get the weeds out from under it. Then it bursts into bloom again and I forgive it and wonder how I ever thought I would be able to give it up. Long ago, if a plant wasn't working for me, I'd dig it up and throw it out or give it away.  But with the roses, they have to die and stay dead for me to give them up. (I did have one that mostly died but a part of it lived so I replanted it.)

I miss my roses, even as I don't miss the weeding and all. I hope I'll get to see them in bloom next spring!

Ray Barnes said…
I know just how you feel about roses. They are demanding, gorgeous, hard work, beautiful and most of all, when you've had one for a while, they're friends.
I could no more dig up a rose which had any sign of life than I could kill a butterfly.
Whatever the truth about your pictured beauty, it is really lovely. Thorns? shmorns!
September 27, 2012 at 2:46 PM

Penelopepiscopal said…
Yes, they are friends! Glad to hear your experience is similar, Ray!
September 27, 2012 at 4:28 PM