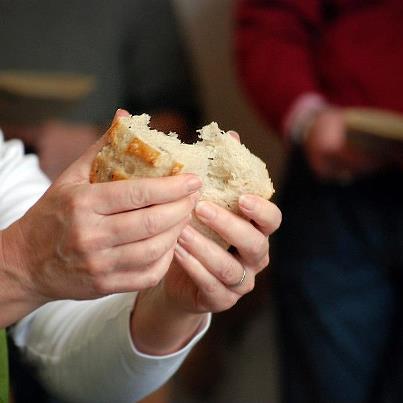 O Lord our God, you sustained your ancient people in the wilderness with bread from heaven: Feed now your pilgrim flock with the food that endures to everlasting life; through Jesus Christ your Son our Lord, who lives and reigns with you and the Holy Spirit, one God, for ever and ever. Amen.

The third of our sacramental prayers, we remember the manna in the wilderness that fed God's people as they journeyed from slavery in Egypt to the Promised Land. As we know from last Sunday's readings, the journey was not easy and the relationship between God and the people was fraught to say the least. They were supposed to make short work of the journey, but because of their disobedience and especially because they were afraid to enter into the Promised Land, they had to wander in that wilderness for 40 years, and most of the people (even Moses) died there. Only a few of the original people went with the next generation into the land of milk and honey.

So in the wilderness they had no food, but God sent manna for them to eat. One of our Psalms says "so mortals ate the bread of angels, he gave them food enough" (Psalm 78) which is lovely, but the people hated it. They wanted meat too. Which they also got. And then they proclaimed that indeed they hate this miserable food.

Still, whether they liked it or not, the bread of heaven, or bread of angels, or manna, sustained the people in the wilderness. And Jesus explained (in the Gospel of John) that he himself was the bread come down from heaven and that whosoever ate that bread would have everlasting life. And so our prayer begins with the ancient people and the petition is for us, the pilgrim flock wandering in our own Lenten wilderness, to be fed sacramentally as well, joining us to the people gone before as God's own flock.

This year, many of us are missing that sacramental food, though, as we abstain from communion during the pandemic. The day is coming soon, though, thank God, that we will indeed eat the bread of heaven again as living members of the Body of Christ.