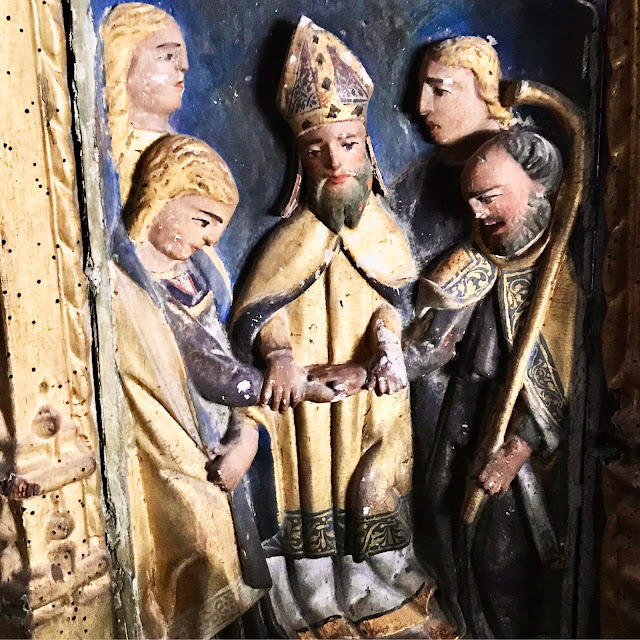 O God, who from the family of your servant David raised up Joseph to be the guardian of your incarnate Son and the spouse of his virgin mother: Give us grace to imitate his uprightness of life and his obedience to your commands; through Jesus Christ our Lord, who lives and reigns with you and the Holy Spirit, one God, for ever and ever. Amen.

Today is the feast day of St. Joseph. The Bible doesn't really tell us much about him. He appears in the nativity stories in Matthew and Luke, is not mentioned at all in Mark, and appears in John when people are wondering about Jesus and say that they know his father and mother, Joseph and Mary. He is most prominent in Matthew, as the angel appears to Joseph, not Mary, to tell about the situation Mary is in and to encourage Joseph to marry her anyway. Joseph also leads Mary and Baby Jesus to Egypt and back after the angel appears again to Joseph to direct this action which will save Jesus from Herod's slaughter.
Later in the stories of Jesus, Mary continues to appear here and there, but Joseph drops out of the picture. No mention is made of his life or his fate.
Tradition has it that Joseph was an old man when he married young Mary, and that he had other children from a previous relationship which is why Jesus had brothers and sisters, because another tradition asserts that Mary had no other children. All this is very complicated, of course. the Bible is, as I said, mostly silent when it comes to any details about Joseph and his life. The point of him, in some ways, is that he is descended from the House of David, which connects Jesus to that lineage. The messiah, of course, was to be from David's line, and Joseph provides the link.
The photo above is from a panel in a larger work at the Isabella Stewart Gardner museum in Boston of the marriage of Mary and Joseph. As you see, a bishop (we know this because of his headgear) is performing the ceremony. Of course there were no bishops in the first century. But perhaps this artist was attempting to regularize or even rehabilitate the relationship between Joseph and Mary and bring it into organized Christianity. Whatever the reason, I was fascinated by this depiction the first time I saw it and always make it a point to visit it again whenever I am at that museum.