Life is Either a Daring Adventure, or Nothing 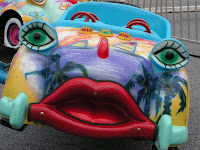 I was privileged to address the senior class of The Walker School at their Baccalaureate service this year. This is the text of my address.

So, graduates, I understand that you all are ready to move on, to get on with your lives, maybe make a fresh start somewhere else - at big schools like Auburn and Georgia and medium sized schools like Georgia Tech and Vanderbilt and even fun-sized campuses like Agnes Scott.

Some of you want to continue to participate in the athletic or theatrical or musical endeavors that you honed here at The Walker School. Some of you are looking forward to making new friends and discovering new fields of study and taking up some new activities.

I bet most of you can hardly wait to go to orientation and move into your new living space and start your new life. I won’t venture a guess about how your much your parents and siblings are looking forward to that day as well.

But I imagine everyone is pretty excited about the future, your future - not only you but your parents and teachers and the school administration who have supported you throughout your years at Walker, being there for you, challenging you guiding you, cheering you on.

And I’m betting that all of you are just a little bit nervous, too, about the future - your future. And if you’re not, you should be......Because as Helen Keller said, “Life is either a daring adventure or nothing.”

You have surely been treated to many quotes during your journey through high school. Graduates of a school such as yours no doubt have heard that both the Bible and John F. Kennedy proclaimed that “those to whom much has been given, much is expected.” You’ve probably been advised to heed Joseph Campbell’s advice to “follow your bliss” or reminded that Confucius says “wherever you go, go with all your heart,” or encouraged to heed Emerson’s advice “not to follow the path but blaze a trail” and to “hitch your wagon to a star.” All of which are great things to remember.

But those quotes are telling you about you yourself and what people think you ought to do. I’m asking you to think about what life actually is, first and foremost, and how it ought to be lived. What is life, and how ought you to live it?

If your driving principle is about figuring out what you you are supposed to do so you can do it, then you are narrowing your scope to focus on your own goals and your own activities and your own self. And that, my friends, is a narcissistic life that in the end is nothing. The world has plenty of that already.

No, life is a either a daring adventure, or nothing.

Do you think Sergey Brin and Larry Page (the guys who started Google) think of life as an exercise in caution? Does the first American woman and youngest astronaut to go into space Sally Ride think of life as a series of movements around her comfort zone? Is the great jazz and classical trumpeter and composerWynton Marsalis concerned with plotting out a careerand then climbing the corporate ladder?

Sergey Brin is a Russian born Jew, and his parents emigrated to the United States when he was six in the midst of a wave of anti-semitism in the USSR. His college days at Stanford were not only focused on computer science but there he learned to ski and rollerblade, and he then took up gymnastics and trapeze; when his dad (who mostly wanted to know if Sergey was going to get a PhD) asked if he was taking any advanced courses, he replied that he had just signed up for advanced swimming.

The other Google Guy, Larry Page, likes to tell students about a signature Google phrase:“Maintain a healthy disregard for the impossible.” And by the way, the Google company provides free meals to its employees, including home delivery to those on parental leave, as well as onsite healthcare and yet has a phenomenal bottom line.

Sally Ride says about herself in the Astronaut Hall of Fame page: “I have been a bit of a risk taker all my life.” Her parents explain that while they encouraged Sally in her activities, what they mostly gave her was permission to explore. She began her career as an astronaut by answering a newspaper ad seeking applicants for NASA’s space program, an ad to which 8,000 other people also replied. She has since created programs to support young school girls who are interested in science.

From the time he was eight Wynton Marsalils joined every band or musical group that asked him to play with them, regardless of musical style; and started his own band at 19. After winning Grammy awards in both jazz and classical genres, he continues to play in a dizzying variety of venues and collaborates with other artists all over the world. He personally funds scholarships for aspiring young musicians and is a patron of hundreds of charities of all types.

Or consider the story of Australian Jessica Watson, who last Saturday, at age 16, sailed her 30-foot pink yacht back into the Sydney harbor 210 days after she sailed out of that same harbor to circle the globe, nonstop, all by herself.

Or John Wood, who left his important and lucrative job as Director of Business Development for Microsoft’s Greater China Region to collect books for kids in Nepal and deliver them in boxes strapped to the backs of yaks. His non-profit Room to Read has now opened 1100 schools and 10,000 libraries in Asia and Africa.

But you certainly don’t have to find a cure for cancer or jump out of airplanes to live life as a daring adventure. Although I hope some of you will - the world needs adventurers of all kinds to be examples and encouragers of others as well as a cure for cancer. But as I said, what I’m advocating is an attitude about how you think about and thus strive to live your life.

As with many things, including religion, there are practices that help bring us to and keep us connected to the way we want to be. So here are some suggestions for practices of someone who sees life as a daring adventure: These suggestions are not about “what to do” but more about “how to be.”

Be curious. Seek out the holy. Try new things, not to build a resume but to exercise your curiosity muscles and stretch your imagination and feed your soul. Be willing to take risks. Explore and expand your world. Be interested in everything and keep an open mind. Try the trapeze, learn to fish. Travel widely, not as a tourist, but as a pilgrim and citizen of the world; learn other languages - read a whole book in another language. Cook, and invite people to eat with you. Change your mind. Talk with all kinds of people and expect to learn from everyone you meet. Dream big and, think different. Love unconditionally. Make friends with people from other races, countries, creeds, political views, socio-economic statuses, and learn to see the world through their eyes. Expect to fail sometimes; after all, Edison did thousands of experiments before finally producing a light bulb that didn’t quickly burn out. Failure is a great teacher. Let the words “imagine” and “curious” “generous” and “explore” be your daily companions. And when you have children of your own, teach them these things, too. Teach them that life is too precious to be spent being focused on other people’s efforts to label, channel and contain them, for that is a nothing life.

And whenever and wherever you can, give back. Give things away. Give away money so that it doesn’t become your God and rule you. Give away your time. Give away your expertise in anything from medical treatment to unicycle lessons. Believe me, living a life dedicated to giving things away in our materialistic-amassing-of-money-and-stuff culture is absolutely positively daring.

I’ve already mentioned some famous people who live life as a daring adventure. Now let me tell you about a man you may have never heard of: Robert Sperry grew up during the Depression years. He was attending college in Maine when the United States entered World War II. Sperry was a college swimmer and because he had been trained as a swimming instructor, it became his job to teach Army and Navy pilots and engineers not only how to swim but to swim through water covered in burning oil. He realized that not only did he want them to learn how to make path through flaming water but he wanted to help them stay calm when faced with crisis.

Later, at a summer job at a boatyard, he was 60 feet in the air working on a mast when his boss’s young daughter fell off the dock and drowned before he could get to her. He discovered that many of the people working at the yard didn’t know how to swim. So he gave swimming lessons to both the children and the adults in the community. He was just a summer laborer in hard economic times, but he saw an opportunity to give back to the community, not only teaching people who lived in coastal Maine how to be safe in the water, but also to introduce them to the joy of swimming.

After college, Mr. Sperry became a school guidance counselor, a career choice born of his passion for the welfare of others and his realization that he could actually help people save their own lives. In the early 1970s, he became interested in Heifer International, the nonprofit organization whose goal is to help end world hunger and poverty through self-reliance and sustainability via animal husbandry and farming. His grandfather owned a small farm on which he raised a few cows. When his grandfather died, Mr. Sperry inherited the farm. He began to raise goats on it and he donated one to Heifer. He travelled to Africa and the Dominican Republic to see Heifer’s work firsthand. And now in his late 80’s, he is still raising goats, and has donated nearly 100 of his goat kids for Heifer to send to families in Latin America.

Mr. Sperry’s life has not been glamorous but it has been a daring adventure, especially for someone who said that when he was your age his only goals were to come back from the War alive and get a steady job.

Graduates, each of your lives is stretched out before you. The way you perceive your life determines how you will live it. So, as you go forth into the world, be curious. Imagine. Explore. Be generous and make the world a better place. Because life - your life that you have been graciously given by the Holy One - is either a daring adventure, or nothing.

N Abram said…
Hiya, saying hello and thank you for sharing this excellent speech! I have heard quite a few and usually they send you to sleep..lol. Have a blessed Pentecost day tomorrow.
May 22, 2010 at 5:11 PM

Patti said…
An inspirational speech, Penny. I will share it with my "boys", Chris-31 & Kevin-33. I think it will serve both as affirmation & encouragement to them. Many years since my "launching", it reminds me I'm not finished yet. Thank you!
May 24, 2010 at 5:35 PM

Penelopepiscopal said…
Thanks, Patti! I think we all need to be relaunched periodically.
May 24, 2010 at 5:54 PM